The North American lumber market experienced a wild ride in 2017. Despite new US legislation imposing tariffs on Canadian softwood lumber imports, North American lumber remains in high demand as confirmed by Madison’s Lumber Reporter, which shows steep price increases for benchmark products during 2017 as noted in the chart below.

Forest2Market’s composite southern yellow pine (SYP) lumber price index confirms that SYP prices also finished 2017 with a bang; prices during week 52 inched up just above the $415/mbf mark. As we put 2017 in the rearview mirror and begin a new year (and the formal slowdown in new construction projects amid record cold temps throughout much of North America) prices have remained fairly steady since mid-October.

In the SYP Kiln Dried lumber price chart below, notice the fairly volatile price performance throughout much of 2017. However, also notice the two sustained runs above the $400/mbf mark, which sets 2017 apart compared to data from recent years. 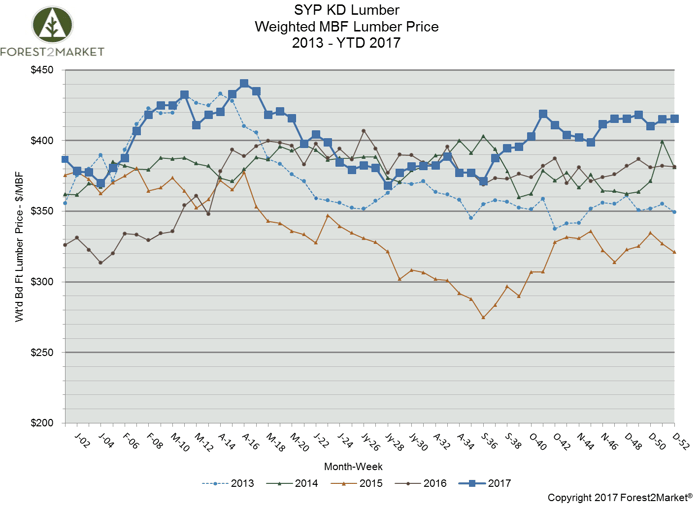 From a high of $440/mbf in April to a low of $368/mbf in July (a change of 20 percent), SYP lumber prices fluctuated pretty regularly within that range and only dropped below the $400/mbf mark for a sustained period in 3Q2017. The chart below details these prices (low price, peak price, average price) and percentage difference (between the low and high prices) from 2013 - 2017. 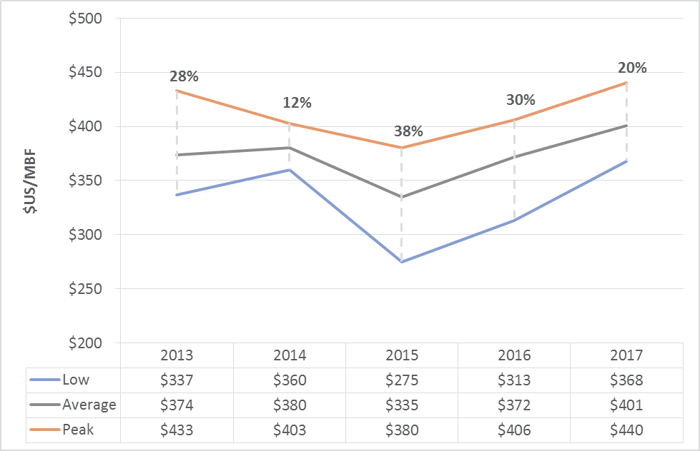 Lumber Prices
SYP Lumber Prices Deflate in 2019; What’s in Store for 2020?
2019 is now in the books and after 12 months of moderate volatility, southern yellow pine lumber prices finished the...
END_OF_DOCUMENT_TOKEN_TO_BE_REPLACED