When the supply/demand imbalance in the North American softwood lumber market began to emerge last May, we provided regular updates and analysis of the wild ride along the way. In the immediate aftermath of the first wave of COVID lockdowns (June 2020), lumber prices soared based on three primary factors:

This combination of events resulted in a tremendous supply gap in the US market. As production capacity fluctuated, demand patterns changed, and the lumber manufacturing sector was forced to chase a moving target.

For wholesalers and purchasers of finished lumber, who typically buy inventories many weeks in advance, the situation created a sense of desperation that resulted in panic buying. When this kind of panic grips a commodities market, it oftentimes spins into a speculative scenario in which prices deviate significantly from intrinsic values, and the market takes a number of twists and turns before settling.

“Lumber prices have been especially volatile in the wake of the COVID-19 pandemic due to increased demand and supply-side constraints. The unprecedented spikes in lumber prices have added more than $24,000 to the price of the average, new single-family home, and nearly $9,000 to the price of a multifamily home since April 17, 2020. Although the housing sector continues to lead the nation’s economic recovery, these sharp price increases threaten housing affordability for all Americans.

“The escalating lumber prices are largely due to insufficient domestic production. When prices began their historic rise, NAHB reached out extensively to the Trump Administration, members of Congress and to lumber mills calling for prompt action to address supply shortages that were harming small businesses, home builders and ultimately, the overall economy.”

A $24,000 (average) price hike is certainly hard for anyone to stomach. While the situation is equally frustrating for both homebuilders and buyers alike, no one could have foreseen the compounding effects from the COVID-induced lockdowns that began a year ago.

However, the data suggest that it was insatiable demand that outstripped supply and drove prices to new highs, not insufficient domestic production in 2020.

Softwood lumber manufacturers across North America did their best to match production to demand in 2020. Despite the devastating wildfires in the Pacific Northwest (PNW) that limited access to timber on the stump, regional producers still sawed more lumber than they did in 2019, and southern manufacturers increased production by more than 7% year-over-year (YoY). In total, US producers actually increased overall production (as a percentage of capacity) in 2020 despite a number of unforeseen challenges.

And what about imports/exports: Did NA producers upset the balance of in-country supplies?

While Canadian lumber exports to the US were down by 20% early in the pandemic, the pace picked up in 3Q and 4Q to finish the year flat, suggesting that there was no lasting gap in Canadian supply. In fact, total US imports were up nearly 5% YoY; imports from Latin America and Europe were up roughly 28% and 52%, respectively. Trade data also indicates that more US lumber stayed in country than in years past; US softwood lumber exports were down nearly 16% and softwood log exports were down 5% YoY.

If YoY US lumber production and imports both increased in 2020, and exports decreased, there is only one feasible response that could have driven record high prices: Strong, unanticipated demand. US softwood lumber consumption was up over 5% YoY to nearly 51 billion board feet in 2020, which still wasn’t enough to prevent runaway prices.

US housing starts soared during 3Q and 4Q2020 before hitting a 14-year high in December at 1.67 million units. Builders then began the new year expecting the pace to maintain itself through the winter months, and early 1Q2021 lumber prices reflected that sense of optimism. However, housing starts receded in January – and even more severely in February – and it now feels like the market is trying to find new footing.

Two housing dynamics to watch in the near term: 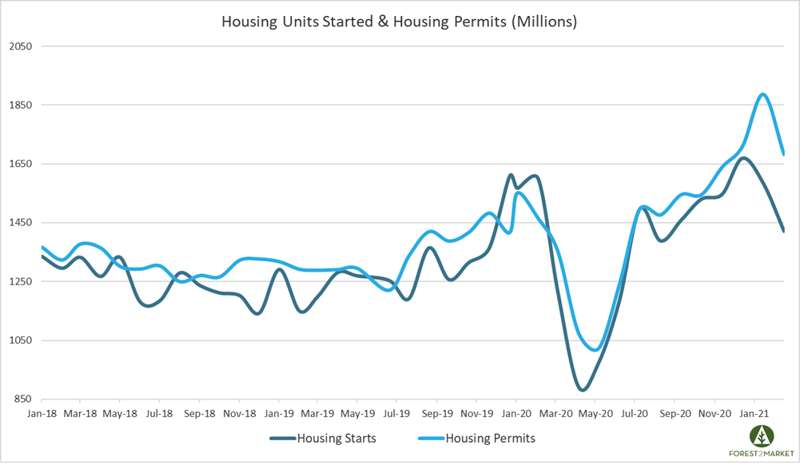 As lumber producers across the continent continue to react to market signals and are better able to match production to current demand trends, the log supply issue in the PNW and western Canada could impact production capacity in the near term. Like 2020, additional pressure will be placed upon manufacturers in the US South.

The good news for builders is that lumber production remains in full swing across the South as manufacturers continue to expand production capabilities to capitalize on high prices. There have been several recent announcements for new sawmills, including West Fraser’s new complex in Dudley, GA, which is slated to come online in 2Q2021 with annual capacity of 270 MMBF.

Despite these additional resources, it is doubtful we will see $300/MBF finished lumber prices any time soon. The big question for 2021 remains: Where will the new bottom - or the new peak - be? 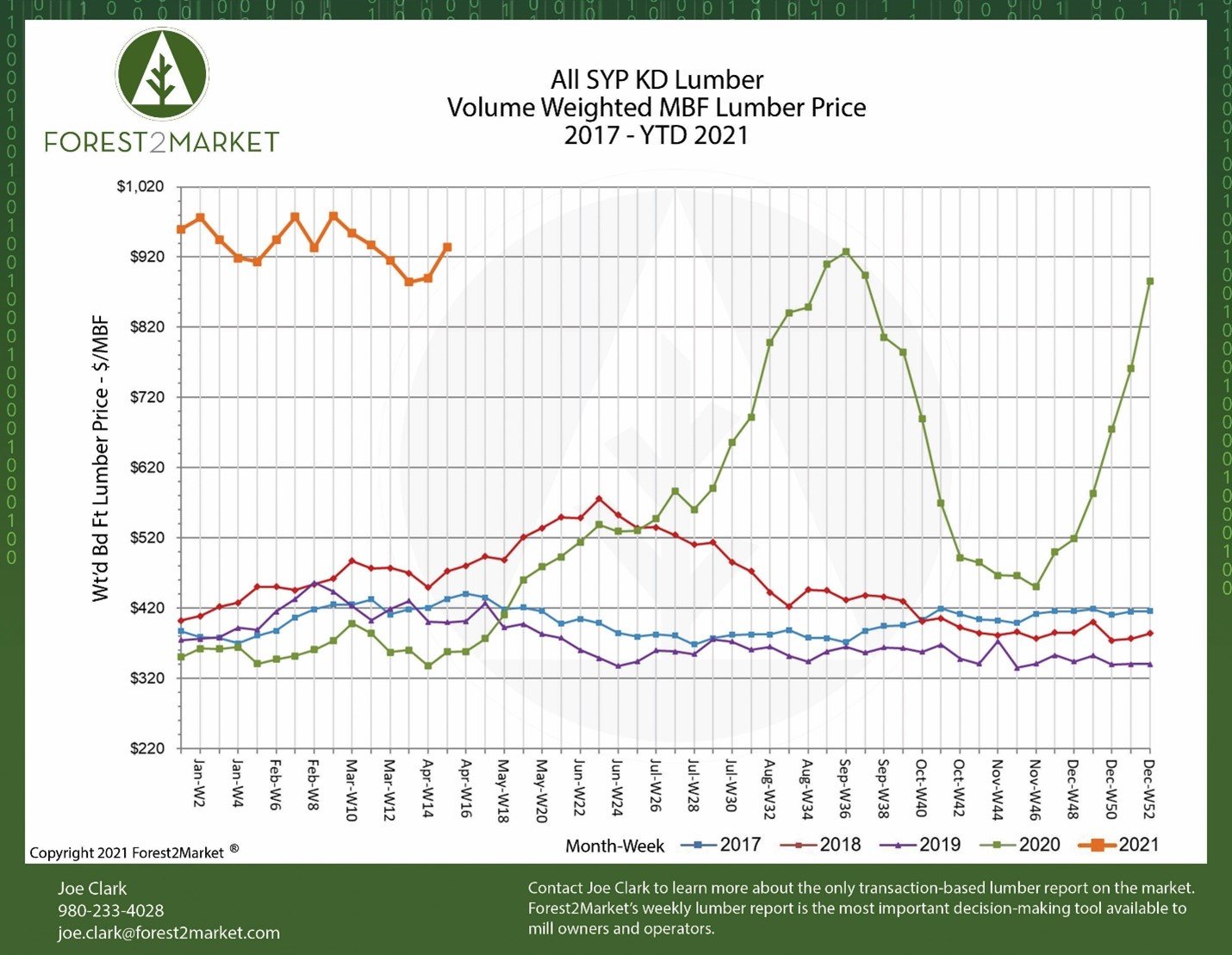