What Is Total Economic Activity?

One form of economic activity almost always leads to others. When a person is paid a salary, for instance, he or she spends that salary on a variety of goods and services. That expenditure then supports other jobs. As a result, total economic activity that results from an event (such as a factory opening or closure, or an increase or decrease in activity spurred by government incentives or regulations) includes more than just direct impacts. 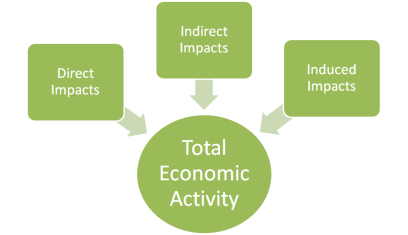 Direct Impacts include wages and spending on goods and services associated with an event. Let’s say a new shoe manufacturing plant with a payroll of $1,000,000, purchases $450,000 from local suppliers and pays property taxes of $50,000; this would result in a direct contribution of $1,500,000 to the local economy.

Indirect Impacts are the production, employment and income changes occurring in other businesses/industries in the community that supply inputs to the project industry. For instance, if the manufacturing facility sourced $75,000 worth of shoe strings from a local business. That $75,000 would be used to pay for a portion of the direct expenditures of the shoe string business and constitute another round of expenditures set in motion by the initial event—the opening of a new shoe manufacturing facility.

Induced Impacts are the effects of spending by the households in the local economy as the result of direct and indirect effects from an economic activity. The induced effects arise when employees who are working for the manufacturing plant spend their new income in the community. This in turn sets off a new round of spending, as the employees in the movie theaters, restaurants and grocery stores go out and spend their own wages.

The sum of the direct, indirect and induced activity associated with an even is its total economic impact.

For example, an aggregate economic multiplier of 2 would mean that for each dollar spent on the event, $2.00 in economic activity is generated. If the original $1.00 spent on the event (direct impact) is subtracted from the total of $2.00, the result indicates that indirect and induced impacts equal $1.00.

The Oregon Biomass Tax Credit: A Model for Other S

Supply chain
Overcoming Supply Chain Challenges in Uncertain Markets
Like all manufacturing-based industries, all supply chains that feed these industries are different. Some are longer...
END_OF_DOCUMENT_TOKEN_TO_BE_REPLACED