US housing starts were largely flat in April but if new housing permits are a bellwether for future builds, fresh data for this metric suggests the homebuilding sector may be slowing. Building permits dropped more than 3% to a seasonally adjusted annual rate (SAAR) of 1.819 million units in April, the lowest level since November 2021. The decline was concentrated in the single-family housing segment, where permits tumbled 4.6% and decreases were seen in all four regions of the US. 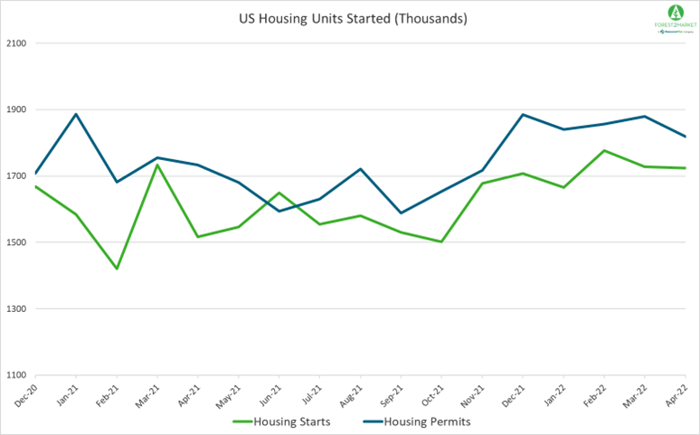 In early May, the 30-year fixed mortgage rate jumped to 5.30% – the highest level since 2009 – and the NAHB/Wells Fargo Housing Market Index (HMI) dropped by eight points to 69.

"Housing construction appears to be undergoing a transition, with the sector caught between sharply rising mortgage rates and declining affordability on the one hand and supply-chain constraints on the other that continue to result in rising backlogs of projects," said Conrad DeQuadros, senior economic advisor at Brean Capital in New York.

Looking more specifically at single-family starts, this segment bounced back sharply last fall but has largely trended down in recent months. This is the “meat” of the new construction market, making up the lion’s share of new builds. But it now appears to be succumbing to soaring interest rates, supply chain and cost pressures. 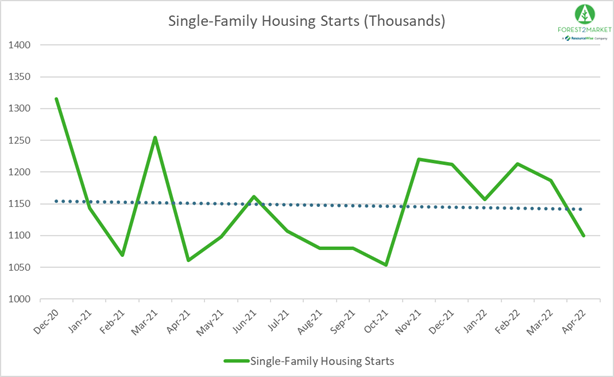 However, demand is still strong and is shifting within the broader housing market. Per fresh housing market insights published in our most recent issue of the Economic Outlook, new-home sales have been somewhat more resilient than expected. The median new-home price has jumped by over $77,000 during the past year, “meaning that new homes are likely a viable choice for fewer first-time home buyers,” said Realtor.com’s Danielle Hale.

Resales fell for a second month to the lowest rate since July 2020, which Redfin’s Taylor Marr attributed in part to cooling demand for second homes. “The pandemic-driven surge in sales of vacation homes is coming to an end as mortgage rates rise at their fastest pace in history, causing some second-home buyers to back off,” Marr said. “When rates and prices shoot up so much that a vacation home starts to look more like a burden than a good investment and a fun place to bring your family on the weekends, a lot of prospective buyers have second thoughts. The new second-home loan fees that kicked in on April 1 were also a deterrent. Plus, some buyers’ down payments—and their nerves—probably took a hit when the stock market dipped over the last few months.”

Looking forward, “We expect new home sales and single-family housing starts to remain comparatively resilient in the near term, in part due to a heightened level of homes currently under construction and high order backlogs,” wrote a research team at Fannie Mae. “While the lack of existing homes for sale will still support new home demand, the [mortgage rate] ‘lock-in’ effect and worsening affordability will eventually weigh on new sales as well.”

Lumber Prices
SYP Lumber Prices Stabilize; Is More Volatility Around the Corner?
By late June, the price for finished southern yellow pine (SYP) lumber had tumbled 59% from its 2022 high mark of...
END_OF_DOCUMENT_TOKEN_TO_BE_REPLACED

Housing Market
Housing Starts Tumble to Lowest Level in 17 Months
After a disappointing May and June, US housing starts continued to lose momentum in July as the housing market cools...
END_OF_DOCUMENT_TOKEN_TO_BE_REPLACED

Housing Market
Lower Housing Starts, Higher Home Prices, and Surging Inflation
After a disappointing May (-14%), US home building continued to inch down in June as the housing market cools amid...
END_OF_DOCUMENT_TOKEN_TO_BE_REPLACED