After cresting a 15-year high in March that was fueled by a breakneck building pace in the Midwest (where total housing starts were up nearly 123 percent month-over-month), homebuilding reversed course and surprisingly dropped in April. 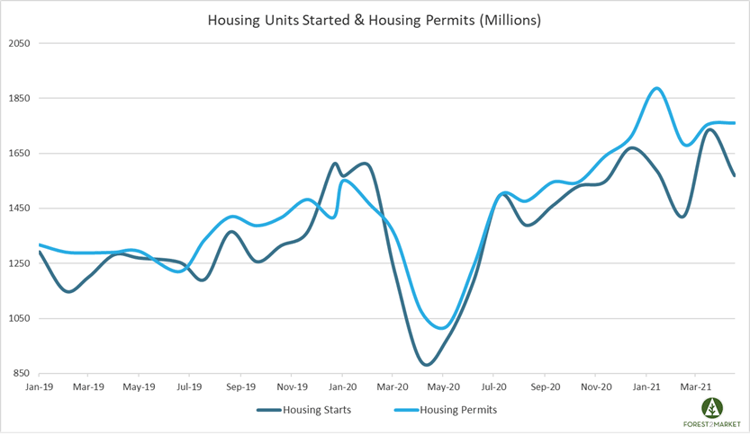 The tumble in April housing starts was concentrated in the single-family segment, which supports speculation that supply chains for construction materials are simply stressed beyond capacity. "Builders are delaying starting new construction because of the marked increase in costs for lumber and other inputs," said Mike Fratantoni, Chief Economist at the Mortgage Bankers Association. "These supply-chain constraints are holding back a housing market that should otherwise be picking up speed, given the strong demand for buying fueled by an improving job market and low mortgage rates."

The 30-year fixed mortgage rate ticked down in April from 3.08 to 3.06, and speculation is that rates are likely to increase in the coming months. The NAHB/Wells Fargo Housing Market Index (HMI) remains unchanged from last month at 83.

According to fresh housing market insights published in our most recent issue of the Economic Outlook, the pace of new home sales has surged as eager buyers poured into the new-construction market amid a shortage of existing homes for sale (evidenced by a 3.7 percent decline in resales). Household migration, motivated by a variety of quality-of-life reasons, may have contributed to surging new-home sales and falling resales: E.g., escaping the potential for civil unrest that has been more prevalent in urban environments; taking advantage of the growing acceptance of remote work; shifting to states with less restrictive virus-control policies; and to be closer to family.

Because of the strong demand for new homes, skyrocketing lumber prices seem to have had little impact on builders’ positive outlook. “While mortgage interest rates have trended higher since February and home prices continue to outstrip inflation, housing demand appears to be unwavering for now as buyer traffic reached its highest level since November,” said NAHB’s Robert Dietz. “NAHB’s forecast is for ongoing growth in single-family construction in 2021, albeit at a lower growth rate than realized in 2020.”

The run-up in lumber prices appears to still “have legs,” especially given the fact that lumber futures trading has been halted on multiple occasions since mid-April because prices “limited up” (rose by more than $32 during a single trading day). “It’s clearly a short squeeze” in futures and spot markets, said Deacon Lumber’s Stinson Dean. “Lumberyards are overcommitted on their sales, and there isn’t enough wood to cover.” This is a clear signal, Dean says, that prices will go up more in the short term despite wood production hitting a 13-year high in February.

Biden administration policy initiatives could further extend present lumber price trends if passed into law. Biden’s infrastructure plan includes repairs to roads and bridges, and investments and improvements in airports and transit systems—much of which will require forest products in some form. Infrastructure spending will “carry over into lumber,” said Sherwood Lumber’s Steve Loebner. “Overall demand for forest products will be bolstered, and that will have a continued bullish effect on prices.”

More homes could also hit the market soon if a recent court decision is upheld. On May 5, a federal judge vacated a nationwide eviction moratorium put in place last year by the Centers for Disease Control and Prevention (CDC) to help tenants who had fallen behind on rent during the coronavirus pandemic. In the ruling, Judge Dabney Friedrich said the CDC did not have the authority to issue a broad moratorium on evictions across all rental properties.

The Biden administration has appealed the decision, so the moratorium remains in effect for now. However, programs like these have significant unintended consequences (e.g., causing economic hardship on owners of small rental properties), and thus the longer this moratorium remains in place, the more painful its resolution will be when ultimately—and inevitably—ended.

FED Chairman Jerome Powell remains optimistic that accelerated construction will eventually normalize the volatile housing market, noting that the US boasts a "very different housing market than it was before the global financial crisis," and a more sustainable rally could even help the broader economic recovery in the years ahead.

Housing Market
Housing Starts Plunge to Lowest Level in 19 Months
After jumping 12% in August due in part to strong demand from the multi-family construction sector, US housing starts...
END_OF_DOCUMENT_TOKEN_TO_BE_REPLACED

Lumber Prices
Southern Lumber Prices Continue to Inch Down
After jumping 12% in August due in large part to strong demand from the multi-family construction sector, US housing...
END_OF_DOCUMENT_TOKEN_TO_BE_REPLACED

Lumber Prices
SYP Lumber Prices Stabilize; Is More Volatility Around the Corner?
By late June, the price for finished southern yellow pine (SYP) lumber had tumbled 59% from its 2022 high mark of...
END_OF_DOCUMENT_TOKEN_TO_BE_REPLACED