In March 2020, before the COVID-19 pandemic gripped the global economy, there were 15,386 new dwellings approved in Australia, a reduction of just 0.8 percent on February and 2.0 percent higher than in March 2019. It now seems certain that had the pandemic not impacted confidence in the latter part of the month, approvals would have been higher, heralding the much-anticipated housing sector recovery.

Importantly, as the chart below shows, approvals of houses were 5.9 percent higher than in February, reaching 9,003 separate approvals, their highest monthly total in nine months. 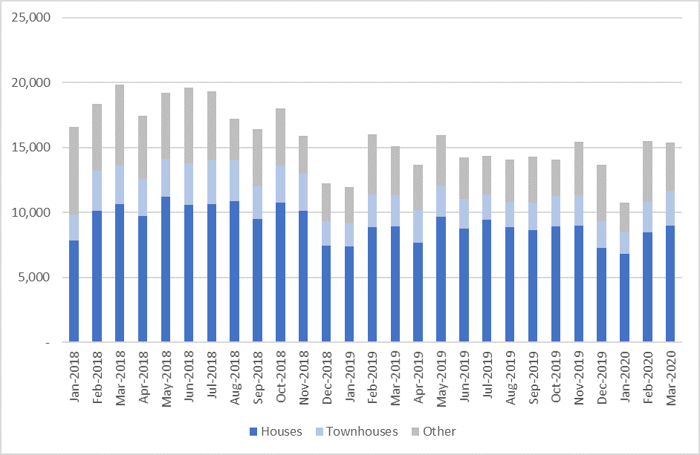 However, after eight weeks of a COVID-inspired economic shutdown, evidence continues to mount of a very steep downturn in demand for sawn timber in Australia, with the worst effects unlikely to be felt until the September quarter.

The driver for falling demand is simple: a slump in dwelling approvals that appears to have commenced late March and that is already flowing into reduced building activity.

The evolving situation is reportedly similar around the nation, impacting the entire supply-chain, hundreds of businesses and thousands of employees. Because the situation is unfolding so quickly, it is important to note that this analysis was prepared on Monday 4th May 2020 and the data is subject to change very quickly.

WATCH: Tim Woods of IndustryEdge Discusses the Impacts of COVID-19 on the Forest Supply chain in Australasian Markets.

The official data for March makes increased sense when we consider that in April, several builders advised they would not be taking orders or deposits for new builds in the near-term. That means possible dwelling approvals were put on hold. Display homes were closed, there was a huge spike in unemployment, and economic and social turmoil ripped across the country.

In a time when ‘cash is monarch’ and uncertainty reigns, committing to a new home and paying a deposit is a lower-order priority for most.

The implication is that April’s dwelling approvals data will be far worse than in March (and given Easter and ANZAC Day, April’s approvals probably would have been lower anyway). In addition, the cessation of orders for new builds came after March and early April reportedly saw a number of builders – big and small – pull work forward and accelerate their building programs to ensure they got to lock-up, before lockdown.

Unsurprisingly, the sudden absence of building hit the sawn wood sector hard and swift. By the end of April, the nation’s largest softwood processor had reportedly taken production downtime at multiple sawmills and announced it was considering how it would scale down for the next six months, with expectations that orders would collapse from May.

At almost the same time, the Australian Forest Products Association (AFPA) estimated that “…the decline in sawn timber demand for Australia’s sawmills will be more than 50% over the next six months.” The evidence to hand points to that being a reasonable estimate. 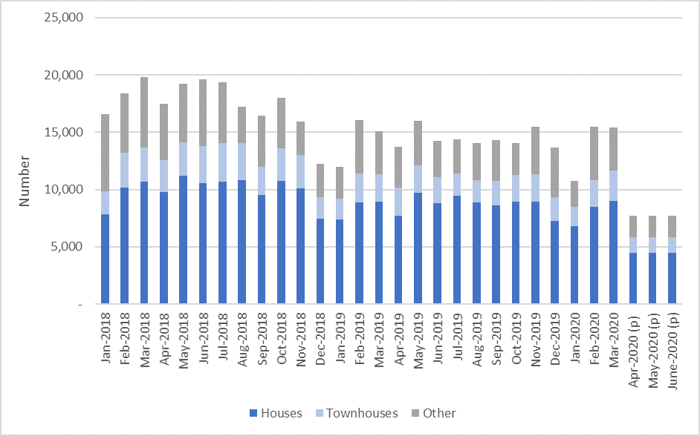 Based on the modeled declines in dwelling approvals and applying general assumptions about market demand in the near term, the fall in sawn softwood consumption in Australia will be 14.3 percent or 120,012 m3 over the June quarter, than previously expected, without taking into account any other changed buying behaviors. 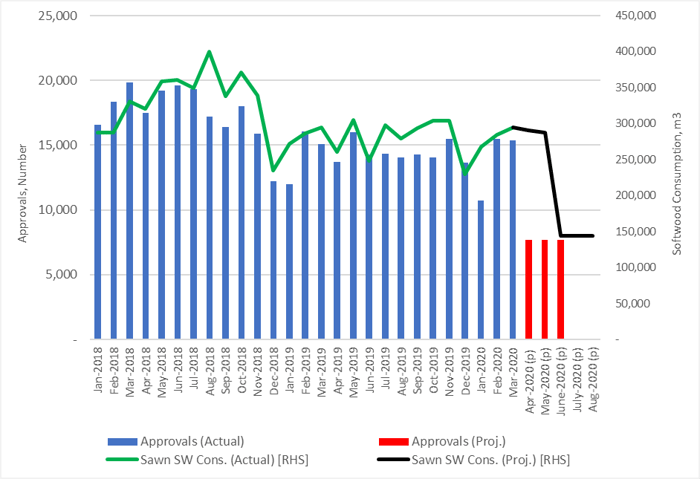 To underscore the impact of lagged effects, the bulk of lower dwelling approvals in the June quarter is likely to be felt in the September quarter, when sawn softwood consumption might well be halved.

The significant bulk of this decline (at least 50 percent and in most periods closer to 60 percent) will be structural grades. However, there will also be declines in the ‘outdoor’ grades used for fences, sleepers, gazebos and the like. These are more discretionary items, so the declines for their consumption could in fact be steeper once the initial flurry of garden and other isolation driven household renovations ends.

We do not know exactly when or precisely how lower approvals will play out. The lag between approvals on the one hand and sawn softwood sales on the other hand is imprecise and varies on a range of factors.

Moreover, the lag effect will vary by state, by region and even by business.

We can be certain that June quarter dwelling approvals will be significantly lower than those recorded in the March quarter. How much of that slump is taken up in lower consumption of sawn softwood in the June quarter and how much in the September quarter is just not clear yet. Some suggest approvals will recover sooner than this projection. They could be right, and we hope they are.

While we may hope that the worst-case scenario will not unfold, it is important to prepare for that possibility amid a period of extreme global economic uncertainty.

Lumber Prices
SYP Lumber Prices Stabilize; Is More Volatility Around the Corner?
By late June, the price for finished southern yellow pine (SYP) lumber had tumbled 59% from its 2022 high mark of...
END_OF_DOCUMENT_TOKEN_TO_BE_REPLACED 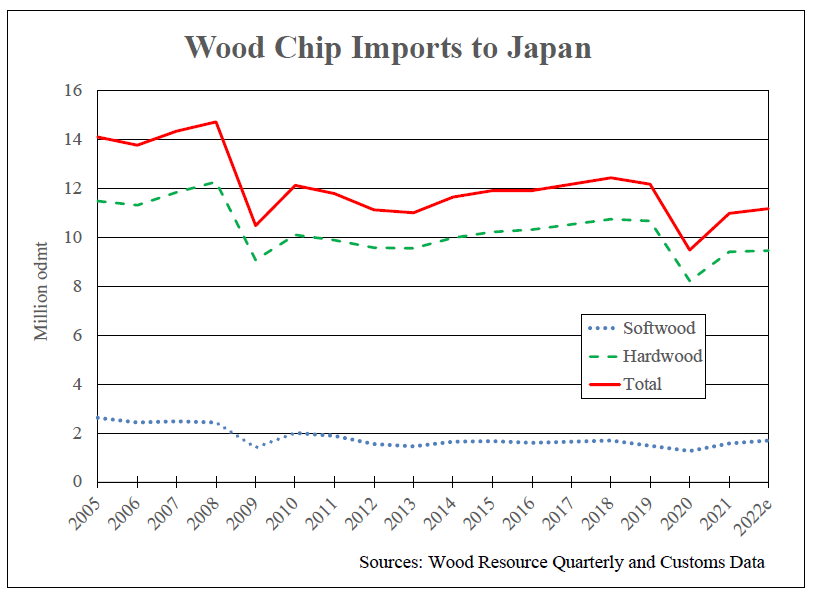 Wood Exports
Japanese Pulpmills Have Increased Their Wood Chip Imports Since 2020
Japan is the world’s second-largest importer of wood chips behind China, accounting for about one-third of the world’s...
END_OF_DOCUMENT_TOKEN_TO_BE_REPLACED

Housing Market
Housing Starts Tumble to Lowest Level in 17 Months
After a disappointing May and June, US housing starts continued to lose momentum in July as the housing market cools...
END_OF_DOCUMENT_TOKEN_TO_BE_REPLACED