Brazil's Economic Recession: Impacts on and Solutions for the Forest Products Industry

At the end of August, Brazil’s federal government presented a proposal for the 2016 budget that included a primary deficit estimated at R$30.5 billion (USD $8.4 billion) or 0.5% of GDP. According to the Minister of Planning, Nelson Barbosa, the government is predicting GDP growth of 0.2%, while inflation is expected to hit 5.4%. Together, these numbers suggest the country is going deeper into economic recession, perhaps even crisis.

The effects of the recession are already being felt in several forest products companies, as efforts to reduce costs by exchanging suppliers for lower cost ones, canceling new investments and laying off employees are underway.

While Brazil’s economy is devolving toward crisis, the economic situation in the rest of the world seems more stable despite volatility in global markets caused by the lack of certainty surrounding growth in China. According to the United Nation’s World Economic Situation and Prospects 2015, the economy of the United States is expected to improve in 2015 and 2016, with GDP projected to expand by 2.8% and 3.1% respectively, compared with the growth rate of 2.3% for 2014. In addition, Western Europe’s GDP growth is estimated to be 1.5% and 1.9% in 2015 and 2016, respectively, and Japan’s GDP is expected to grow 1.2% in 2015 and 1.1% in 2016.

World trade is also starting to recover in major developed countries and to show moderate growth in developing countries. Overall, world trade is forecast to grow at an annual rate of 4.5% in 2015 and 4.9% in 2016. Global output will also increase.

Caught in the middle, the Brazilian forest products industry is trying to find the best pathway between deteriorating domestic economic conditions and the possibility of global economic improvement.

For many Brazilian forest companies, the devaluation of Brazil’s currency could not have come at a better time (Figure 1). With the USD/BRL exchange rate at its lowest point since 2002, these companies are taking advantage of the global economic recovery to increase exports. 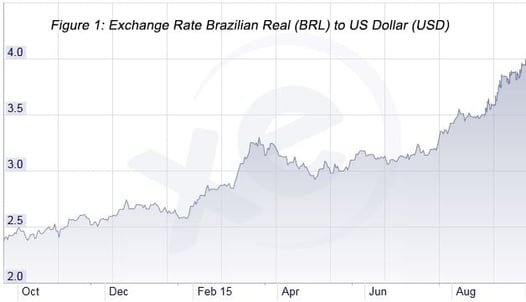 At the same time, however, forest industry companies targeting internal markets are struggling to stay profitable and stay in business. Construction and consumption, both supported by aggressive credit policies and government intervention, kept the domestic market for forest products running until 2014. Currently, Brazil is paying the price for those aggressive and populist policies with a recession. And the effect is exacerbated by the fact that internal production costs are much higher than they have been in the past. According to Indústria Brasileira de Árvores (IBÁ, or Brazilian Tree Industry), wood production costs in Brazil were 40% lower than they were in the US in 2000; by 2014, however, this advantage had been reduced to less than 10%. In addition, the government increased energy costs by 120% in the last 12 months.

The wood panel segment is already seeing the effect of these changes. Between January-July of 2014 and January-July of 2015, wood panel imports decreased 83% while exports increased 40%. As a result, traditional wood panel and flooring manufacturers are now racking their brains, pouring over forecasts and projections to determine whether it is safe to change commercial strategies and target international markets.

Based on the state of domestic and international markets, what can we expect for the future of the Brazilian forest industry?

China will continue to be the main driver of forest industry sector activity in Brazil. Despite its GDP growth having fallen from 11% to 6.5% (2015 forecast) or perhaps even as low as 3-4%, China remains a vibrant market, as positive demographic and social changes should counteract the effects of the decrease in GDP growth. An aging and urbanized population will continue to consume staples and other commodities. Supported by an increase in the population’s purchasing power, Brazil’s pulp exports are likely to continue at current levels as China is a voracious consumer of pulp-based hygiene products.

Pulp production in Brazil will be further buoyed by exports to other regions of the world as well. China is just the second largest Brazilian pulp consumer at 32% of exports. Currently, Europe is Brazil’s main consumer with 40%, and North America is third with 18%.

New pulp mill projects, which will be built in the next 6 years, should increase the plantation area by 10% in the same period. This need for additional timber plantations is a good opportunity for forestland investors such as TIMOs. Brazil’s forest products companies are following the international trend of separating their forest assets from their manufacturing assets. The combination of a weak Brazilian currency and of the availability of these forest assets represents good business opportunities for international investors.

Southern Brazil’s pine industry should also be able to avoid internal crisis. Plywood production – a segment directly linked to the pine industry – increased by 6% between 2013 and 2014, as result of a 22.3% increase on exports.

Among all bad news related to the Brazilian economic crisis, high energy prices (a result of high energy demand) may encourage the development of bioenergy capacity, an emerging industry that may boost domestic markets during the recession. Bloomberg’s recent Energy Outlook study states that Brazil should attract about US$300 billion in energy-related projects through 2040, about 10% of which will be for bioenergy projects. Indeed, several wood energy projects are currently under development in the country, mainly in regions where wood is readily available (like Minas Gerais state) or where reasonably priced land is available for greenfield energy projects.

While the Brazilian economy is undergoing a period of uncertainty, opportunities for the forest products industry abound. Export markets, new pulp mill projects on the horizon and an emerging bioenergy industry will provide some support to domestic suppliers and producers as the current economic cycle runs its course.

To be successful over the next two years, Brazilian producers and timberland owners will require a fundamentally better understanding of both Brazilian and international markets. Producers will have to make weekly trade-offs between domestic and export markets, while timberland owners will have to re-assess investments routinely and price logs according to end-use markets—wherever those may be.

Learn more about Forest2Market do Brasil: