Forest2Market has closely followed the resurgence of the wood fiber market (and the pine market, specifically) in Brazil over the course of the last several years, which has occurred amid a tumultuous political environment. After a long recessionary period, current domestic market segments like packaging and panels have grown, and the outlook for pine wood products is optimistic.

While some of the political fallout still continues to affect the full recovery of the domestic economy, foreign markets have provided Brazil’s pine industry with a real jolt.

The chart below shows the change in Brazil’s export lumber and plywood volume over the last 10 years. In March 2018, the volume of pine plywood exports reached a record high of just over 200,000 cubic meters (m3), a 22 percent increase over March 2017 and a 36 percent increase over March 2016. The volume of sawn wood exports also set a new record at 210,000 m3, which was the best March performance in the last decade. 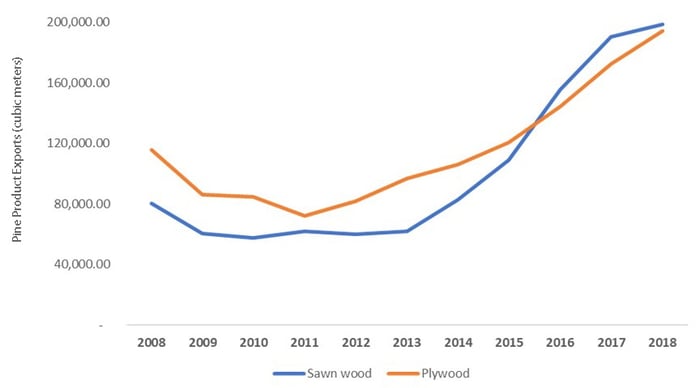 Of the export destinations for these two products in 1Q2018, the United States was the #1 importer. However, the volume that Brazil exports to the US is very small considering the tremendous size of the US construction market; roughly 1 percent of the total volume comes from Brazil.

Based on this data, the current and near-term prospects for the Brazilian pine market are encouraging. While the export market for all Brazilian wood products is driving growth, the domestic market is still in recovery and a number of factors continue to influence this dynamic.

Brazil’s forest products industry is entering into a positive phase in the global market cycle. While some of the considerations above may adversely affect this phase, the recent past indicates that global politics and some of the trade disputes that arise are generally temporary. Additionally, Brazil's low-cost position and abundance of fast-growing wood fiber make it an increasingly favorable trade partner in a global economy. Despite US trade policy regarding other nations, Brazil is currently in an advantaged position as a supplier to the US; it is the largest market in the world, and Brazil has plenty of opportunity to further penetrate it.

Global Forest Industry
Effects of the COVID-19 Pandemic on Brazil’s Forest Sector
Some players in the Brazilian forest-based industry are doing well in the face of the economic crisis caused by the...
END_OF_DOCUMENT_TOKEN_TO_BE_REPLACED