In May, Madison’s was invited to attend and present at the Forest Resources Association (FRA) Western Regional Meeting at Harrison, British Columbia (BC). The meeting was attended by a number of forest operators in the Pacific Northwest (PNW) from both sides of the Canada/US border. A lot of the meeting’s focus was on the coastal areas, but there were significant updates on the situations in BC’s interior, Washington, Oregon, Idaho and Montana.

The BC Ministry of Forests provided an update on the timber supply situation in the region following the devastating wildfires of 2017. The Ministry has deployed aerial surveys and used remote sensing data to map fire scenarios, and the data has revealed an average loss ratio of about 54% of the volume of timber stands within the fire perimeters.

One need only take a cursory glance at the disturbing map below to identify the dire situation now facing BC interior forest operators. 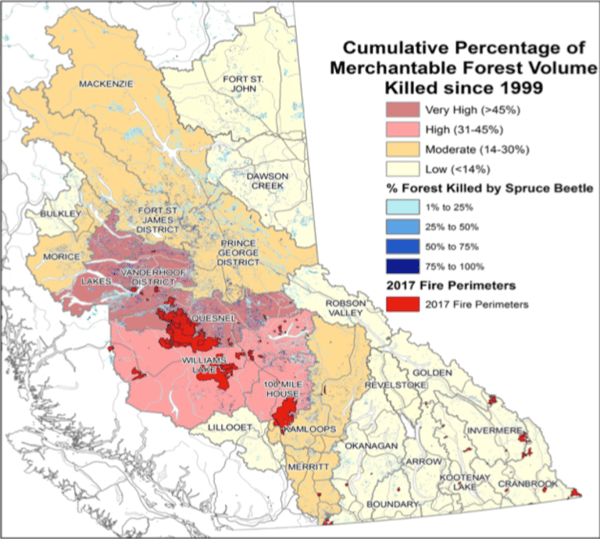 BC sawmills will often plan six quarters in advance for their log supply needs. Conceivably, many of these facilities across the region would have planned their investments and harvest orders at the beginning of 2017. After last year’s fires, many sawmills are only now discovering the full impact on their respective timber supplies. As such, these manufacturers — who are experiencing extraordinary demand from the US — must now rework their log supply and timber harvest arrangements. 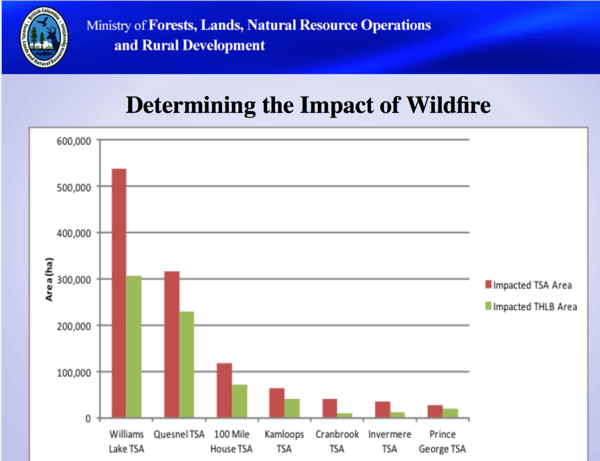 At the FRA meeting, Albert Nussbaum of the British Columbia Ministry of Forests, Lands, and Natural Resource Operations provided updates of provincial timber losses due to the 2017 wildfires, and he provided details on the current post-fire situation for BC’s timber inventory. The devastating timber loss last year is calculated at over 8 times the historical average area of 142,000 hectares (350,900 acres), affecting a total of 1.2 million hectares (2.9 million acres).

Nussbaum began by saying the theme of his presentation was going to be “BC Timber Rationing.” He went on to say that the outcome of the horrendous Mountain Pine Beetle infestation in BC was not as bad as some had thought, but still disastrous. “Using 2017 harvest levels, MPB killed the equivalent of 12 years of AAC (annual allowable cuts), or 720 million cubic meters,” he said. An example of the tangible impact this situation has on an operator is the Norbord OSB plant in 100 Mile House, BC, which is “still struggling for fiber,” said Nussbaum. 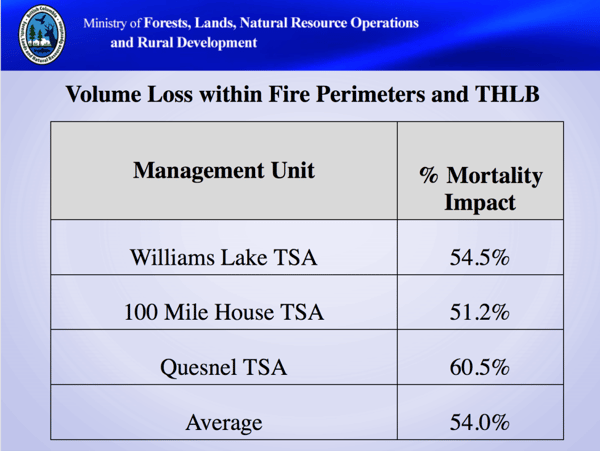 British Columbia wildfire ecologist Robert Gray was able to provide further insight, saying that the 650,000 hectares impacted by the 2017 fires included several young plantations totaling approximately 130,000 hectares (321,000 acres). This is an immediate loss to BC’s previously-calculated mid-term timber supply, which will have to be regenerated and planted all over again.

In the Williams Lake timber supply area, the concept of “timber rationing” is also going to come into play as we approach the mid-term. Nussbaum described the current AAC for Williams Lake as “Actually right around where the supply is now,” but harvests will need to drop considerably once the salvaging of dead timber is no longer viable.

Nussbaum then moved on to the obvious question on everyone’s mind: when will the timber supply situation result in additional sawmill closures? He stressed that this is a tough event to predict, and it will likely be very sensitive to product price. Current lumber prices are very high and mills are operating and harvesting right up to their allowable volumes, yet many are still struggling with removing and processing dead wood where possible.

Nussbaum concluded his presentation by explaining that the timber supply in BC hasn’t changed dramatically from his department’s projection in 2007: a 20% reduction in timber supply from what was expected prior to the mountain pine beetle infestation.

Supply chain
Performance Benchmarks Drive Profitability When it Matters Most
You might know the price at which you buy and sell timber, but how do you know whether that price is good or bad...
END_OF_DOCUMENT_TOKEN_TO_BE_REPLACED

Timber Prices
Where are Southern Timber Prices Headed?
The modern forest supply chain is without guidance for operating in the current pandemic-driven economic...
END_OF_DOCUMENT_TOKEN_TO_BE_REPLACED