Author: Suz-Anne Kinney
In Massachussetts, as we reported in our last issue, the state government is currently reconsidering whether biomass will be an allowable source of renewable energy. The EPA announced that it planned to treat biomass as a fossil fuel when developing regulatory standards for air quality. Not surprisingly, there has been a significant industry response arguing that these types of decisions are based on bad science.

In response to the EPA announcement, for instance, 114 scientists in forestry-related disciplines sent a letter to both houses of Congress laying out the science behind the carbon neutrality of biomass. Here’s an excerpt:¹

The carbon released from fossil fuels has been long separated from the global carbon cycle and adds to the total amount of carbon in active circulation between the atmosphere and biosphere. In contrast, the CO2 released from burning woody biomass was absorbed as part of the “biogenic” carbon cycle where plants absorb CO2 as they grow (through photosynthesis), and release carbon dioxide as they decay or are burned. This cycle releases no new carbon dioxide into the atmosphere, which is why it is termed “carbon neutral”. It is unrelated to the GHG emissions produced from extracting and burning fossil fuels, except insofar as it can be used to offset or avoid the introduction of new carbon dioxide into the atmosphere from fossil fuel sources. Biogenic GHG emissions will occur through tree mortality and decay whether or not the biomass is used as an energy source. Some regions of the United States have rampant wildfires contributing pulses of greenhouse gases to the atmosphere. Capturing the energy value of these materials thereby offsetting fossil fuel emissions generates a net effect from burning biomass that is better than carbon neutral.

In terms of their greenhouse gas properties, there is no difference between biogenic and fossil fuel carbon dioxide. The difference derives from where the carbon was sourced. Burning fossil fuels that are mined from millennia-old deposits of carbon produces an addition to carbon in the atmosphere, whereas burning woody biomass recycles renewable plant growth in a sustainable carbon equilibrium producing carbon neutral energy. Fossil fuels also produce other greenhouse gases and pollutants with more negative environmental impacts than woody biomass. 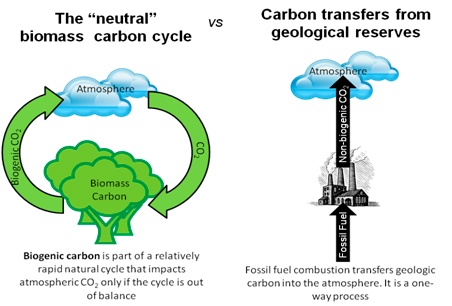 In addition, if biomass is treated like a fossil fuel, the likely result is an increase in carbon emissions. In their letter, the 114 forest scientists expressed their belief that “equating biogenic carbon emissions with fossil fuel emissions . . . is not consistent with good science and, if not corrected, could stop the development of new emission reducing biomass energy facilities. It could also encourage existing biomass energy facilities to convert to fossil fuels or cease producing renewable energy. This is counter to our country's renewable energy and climate mitigation goals. ¹

Al Lucier and Reid Miner of NCASI have quantified what would happen if only 1 percent of timberland in the United States was converted to non-forest uses as a result of the restriction of forest products markets:

In many places in the world, landowners have the opportunity to convert forest to other uses, to improve the economic returns from their land. Where these conversion pressures exist, the value of harvested wood can help to keep land in forest. This indirect effect of the forest industry’s activities is very important. For instance, if only 1 percent per year of industry-owned timberland in the United States was converted to non-forest uses, the result would be a transfer of carbon to the atmosphere equal to 90 million tones of CO2 equivalent per year. ²

² Al Lucier and Reid Miner. “Biomass Carbon Neutrality in the Context of Forest-based Fuels and Products.” National Council for Air and Stream Improvement (NCASI). May 2010. Available from the Society of American Foresters here: http://www.eforester.org/fp/policy.cfm