Carbon Emissions from Forest-Based Biomass are 115% Lower than NG

Just weeks after Congress voted to recognize the carbon neutrality of forest biomass, the Biomass Power Association published the results from a study demonstrating the dramatic carbon benefits of using forest residue-based fuel in place of natural gas in a power generation facility. The study was conducted by Dr. Madhu Khanna, Distinguished Professor in Environmental Economics at the University of Illinois Department of Agricultural and Consumer Economics, and Dr. Puneet Dwivedi, Assistant Professor in Sustainability Sciences at the University of Georgia Warnell School of Forestry and Natural Resources.

The study focused on the use of organic residues to generate power supplied to the electric grid. In particular, the organic fuels used at the New Hampshire facility are woody residues from timber harvested for use in local lumber and paper mills, which includes leftover tree tops, limbs and other residuals. These low-value, wood waste materials are generated as a byproduct of the harvesting operation and if not used as a source of energy, the material remains on the forest floor and is left to decompose. Instead of being wasted, consuming this material in the form of woody biomass as a substitute for fossil energy helps to expand the energy portfolio and reduce carbon debt.

When comparing these carbon emissions with a natural gas facility, Dr. Khanna and Dr. Dwivedi took into account the rate of decay, as well as the carbon and methane emissions from decay that would have occurred if these materials were left on the forest floor rather than used for power generation. The study used a landscape-level analysis, and considered both biogenic emissions from decay of biomass as well as life-cycle emissions during the process of harvesting, collecting and transporting the biomass to a power plant.

The study analyzed carbon intensity of biomass power generation using forest residues on a per-hectare and per kilowatt hour basis. It assumed that the forest land used to power the facility is managed on a continuous rotation basis. The land consists of 25 parcels that are harvested one at a time on an annual and sequential basis over a 25-year period to continuously power the facility.

“Assessment of the carbon intensity of biopower, in the near term, depends a lot on whether the carbon accounting is conducted at the stand level or at the landscape level,” said Doctors Khanna and Dwivedi. “When biomass is being sourced continuously for a power plant, as in this case, accounting for carbon effects across the landscape from which it is being obtained is more appropriate than at a single stand level. When we do that, we find that the savings from avoiding emissions from decay of residues that would be left in the forest more than make up for the emissions generated in the process of collecting, transporting residues for power generation.” 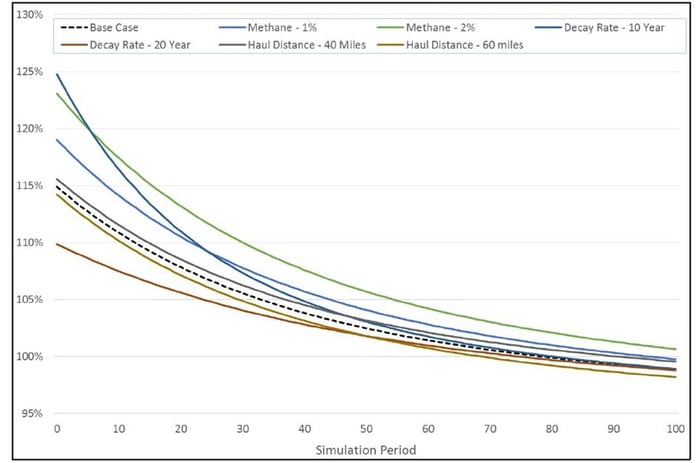 “Last week, Congress overwhelmingly voted to acknowledge the carbon neutrality of biomass, and the results of this study confirm the wisdom of that vote,” said Bob Cleaves, president and CEO of Biomass Power Association. “As expected, biomass fuels are vastly preferable to natural gas from a carbon perspective. In addition to the carbon benefits of biomass, the existence of a biomass facility in a forested area promotes jobs and healthy forests by creating a market for low value wood products. As a nation, we can’t afford not to promote the use of biomass, and we look forward to working with Congress on policies that do so.”

Dr. Khanna and Dr. Dwivedi were able to extract some very persuasive data for using forest-residue biomass in their latest study. Renewable sources of energy make environmental sense, and scientists in a number of forest-related industries and groups such as the National Council on Air and Stream Improvements (NCASI) have recognized the difference between biogenic and non-biogenic sources of energy. Combusting fossil (non-biogenic, or below ground) sources of carbon (coal, oil, natural gas) adds to the carbon dioxide content of the atmosphere because these resources are “captured” and released from within the earth. Once these energy sources are burned for energy production, their carbon debt cannot be repaid because they are not renewable resources.

However, combusting carbon in the form of renewable woody biomass derived from forest-residues (biogenic, or above ground) adds little to no net carbon dioxide to the atmosphere when considered over the long term. As long as we are not depleting forest inventories, which we currently are not, this biogenic carbon is reabsorbed by new plant life as it grows. In the case of the professors’ study, using forest residues from managed timberland is a sustainable and cyclical process that does not create carbon a debt like fossil energy sources.

“The professors’ findings track with the logical assumption that the use of fuel that regenerates constantly emits less carbon than fossil fuels,” Cleaves added. “We are grateful to Dr. Khanna and Dr. Dwivedi for the time and effort they devoted to this project.”

Doctors Khanna and Dwivedi noted that this finding was specific to the use of residues for power generation and that a similar landscape-scale analysis needs to be conducted for other forest biomass to determine its greenhouse gas intensity relative to fossil fuels.

Bioenergy
Forest Service Announces Investments in Wood Energy and Innovation
The Guardian recently published a piece supporting the likelihood that the COVID-19 pandemic will have a drastic...
END_OF_DOCUMENT_TOKEN_TO_BE_REPLACED

Bioenergy
How is COVID-19 Impacting the Global Bioenergy Sector?
The COVID-19 pandemic may have temporarily changed the way a number of businesses interact with customers, but those...
END_OF_DOCUMENT_TOKEN_TO_BE_REPLACED