Despite the sunsetting of the Softwood Lumber Agreement (SLA), Canadian lumber imports to the US have risen by over 82 percent since the Great Recession and the subsequent bottoming of the housing market in 2009. Interestingly, even though total lumber imports from Canada are 30 percent lower than they were at their peak in 2005, lumber from Canada continues to make up a significantly higher percentage of new, single-family housing units.

The exchange rate effect cannot be ignored when analyzing this chart; the US dollar has remained strong against the Canadian dollar, which has resulted in cheaper Canadian lumber over the last two years. Also of note, the period between 2006-2015—when the SLA was in effect as a trade policy—the Canadian “market share” of US housing construction was at its highest, reaching a peak in 2011. While this market share has abated during 2012-2016, levels remain above the historic average, which signifies that, relative to today’s housing market, Canadian market share is strong. 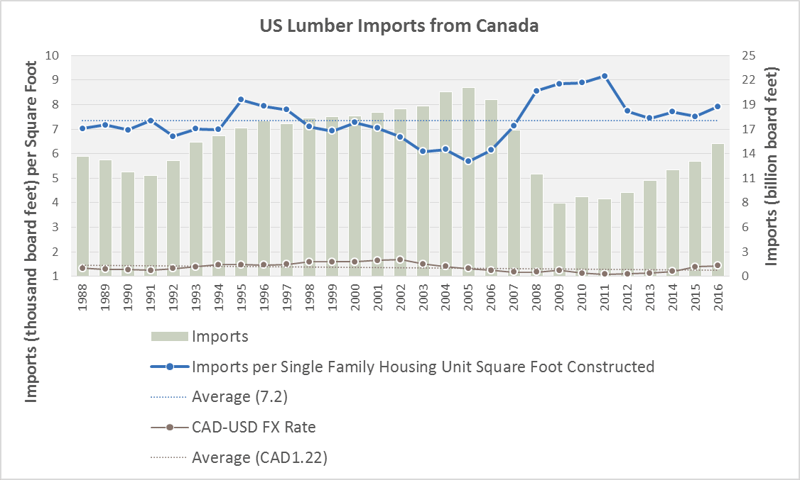 Lumber Prices
SYP Lumber Prices Stabilize; Is More Volatility Around the Corner?
By late June, the price for finished southern yellow pine (SYP) lumber had tumbled 59% from its 2022 high mark of...
END_OF_DOCUMENT_TOKEN_TO_BE_REPLACED