Charting the Sinking Dollar and Lumber Trade Flows into 2018

An interesting dynamic in global currencies is taking shape. The DJIA continues to soar, tax cuts are on the horizon for American workers, American companies are bringing cash back into the country and pumping it into their operations, and a general sense of optimism is driving corporate growth. However, the Trump Administration’s “America First” policy is ruffling some feathers with America’s global trading partners, and the US dollar (USD) is positioned to plunge as a result.

The dollar recently sank to a three-year low after Treasury Secretary Steven Mnuchin said a weaker dollar was good for US trade while at the World Economic Forum's annual meeting in Davos, Switzerland. "Obviously a weaker dollar is good for us as it relates to trade and opportunities," Mnuchin said, adding that the dollar’s short-term value is "not a concern of ours at all."

Mnuchin's comments are in line with President Trump’s sense of economic protectionism; prior to his inauguration, Trump said that the dollar was "too strong" and that US companies can't compete because of it, particu 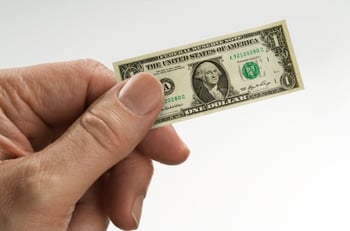 larly against the Chinese. Whether or not a weak dollar policy was Mnuchin’s intentional message in Davos, the market took note of his comment. The dollar has been tracking downward over the last year, and dipped below 90.00 earlier this week (the euro [EUR] rose to 1.23/USD and the yen gained 0.8 percent).

Mnuchin reiterated that the dollar’s strength over the long term is reflective of the strength of the US economy, which is also the message that’s coming out of the White House. “Currently we have a very stable dollar because of how well the US is doing, and it’s as powerful as it’s ever been," White House spokeswoman Sarah Sanders said. “We believe in free-floating currency. The president has always believed in that."

While the US economy—the world’s largest—is beginning to flourish after a long, slow recovery from the Great Recession, the dollar’s 10 percent drop over the last year contradicts Sanders’s claim that the currency is stable. But the sentiment is in line with the Administration’s stance on trade policy, which Trump has echoed since his early days on the campaign trail: “America first” policies designed to support American exporters and reduce the nation’s trade deficits. Trump has also mentioned his preference for a softer dollar, noting that too much strength within the currency could harm the economy.

However, the weak dollar policy could also torpedo recent economic momentum in a number of ways by:

As we noted last quarter, offshore lumber producers moved in 2017 to take advantage of the gap left by the decline in Canadian exports to the US. For the first half of 2017 (FY data is not yet available), offshore imports into the US rose 38 percent and, according to data from the US Department of Agriculture, Russian shipments were 42 percent higher in 2017. Russia is not the only country benefiting from the US/Canada trade dispute; a number of European nations also increased softwood lumber exports to the US during the first six months of the year:

The volume of these softwood lumber imports is nothing near traditional Canadian volumes, but the number of foreign producers that tiptoed into the massive North American market increased in 2017. Cumulatively, these countries could have an impact on meeting near-term demand while filling the supply gap and, long term, could establish supply chains that might make the US a consistently viable destination for their softwood lumber exports.

However, the USD ended 2017 down about 12 percent against the EUR as Europe’s economy has begun to pick up steam (GDP +2.5 YoY in 3Q2017). A continuation of this trend—a declining USD and strengthening European economy—would likely dampen future imports of offshore lumber from Europe, despite a sustained run of high prices. European producers would much rather service regional markets rather than incur the added expense of moving product to the US amid unfavorable exchange rate trends. With growing demand in Europe—especially Eastern Europe and a rebound in the Middle East and North Africa—we look for exports to the US to tail off as we get further into 2018.

How Low Can it Go?

Investors seem confident that the Administration’s sense of protectionism has its limits. A recent Financial Times (FT) article notes that “For example, bringing an end to the North American Free Trade Agreement with Canada and Mexico could be costly for US jobs. And… the US president would not want to see any negative consequences from protectionism that end up affecting US equities.”

FT continues, “Moreover, talking down the dollar is a simple policy strategy—it does not need Congressional approval—and is a far more straightforward way than renegotiating treaties to address trade imbalances. Weakening the dollar acts as an effective tariff on imports and an incentive for exports. It also buoys Wall Street because many US companies are global heavyweights and prosper from a weaker dollar, boosting the value of their foreign-based revenues.”

Steven Englander of Rafiki Capital added, “But part of the attractiveness of trashing the dollar is there aren’t that many people saying they want a stronger currency. If he [President Trump] can talk down the dollar, he can get that for free.”

The Davos meeting may be an ideal event for members of the Administration to engage in some economic posturing on the world’s stage. We witnessed the same bold language from President Trump during his trip to Asia last November, none of which was surprising; he laid out a protectionist vision during his campaign and is simply following through on his own agenda. It’s also not surprising that similar language is now being leveraged to “talk down” the dollar.

Lumber Prices
Softwood Lumber Prices Tumble 40%; Is Another Rally on the Horizon?
The volatile North American softwood lumber market continues to keep us all guessing as we enter mid-2Q2022. After...
END_OF_DOCUMENT_TOKEN_TO_BE_REPLACED

Log Markets
War in Ukraine Will Tighten Lumber Markets in Europe, China and The US
One immediate impact of the war in Ukraine and the sanctions by Western countries has been a dramatic reduction in...
END_OF_DOCUMENT_TOKEN_TO_BE_REPLACED