As biopower markets in Asia mature, the increased competition for wood pellets and chips will provide opportunities for suppliers of these materials around the globe. Because biomass pellets can be made with low-cost wood raw materials and the cost of shipping is low, the number of potential suppliers is significant. Biopower producers in Japan and South Korea will require a secure and consistent supply of both pellets and chips, sometimes from multiple suppliers in multiple geographies. As a result, they will require strong procurement strategies, supply chain risk assessments, cost analyses, supplier diligence processes and contract negotiation strategies.

This is the fifth installment of our series on global supply regions that currently, or could in the future, supply Asian biopower markets. Part 1 focuses on the US South, Part 2 covers the US Pacific Northwest, Part 3 covers British Columbia and Part 4 covers Brazil.

Unlike its neighbor Brazil to the east, where forests cover 60+ percent of the land area, forests cover just 24 percent of Chile. The country, which includes over half of South America’s western coastline, has a unique geography and extremely diverse landscape. In recent decades, Chile has also developed a major forest plantation resource that is the foundation of a significant export industry.

Chile’s forested area comprises approximately 13.4 million hectares (33.2 million acres) of natural forests and 2.4 million hectares (6.0 million acres) of forest plantations. The natural forests are concentrated in southern Chile, while the plantations are concentrated in the mid to lower-mid region of the country. The plantations—primarily pine and Eucalyptus—have been planted on land that was previously used for agriculture or threatened by erosion. 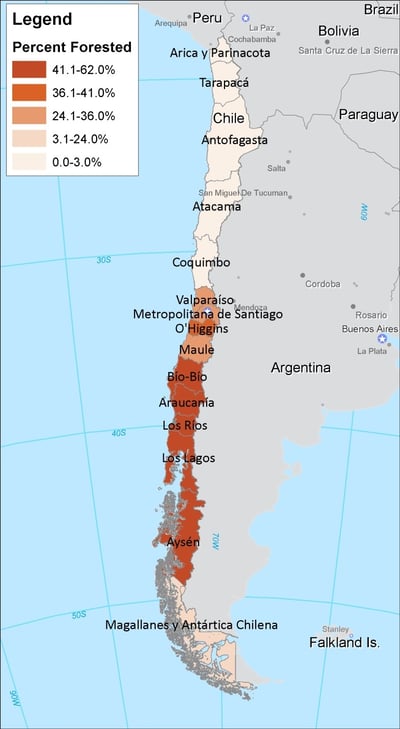 As in Brazil, the plantation growth rate is very high. With these added forest resources, the timber harvest for industrial use has nearly tripled over the last 25 years, reaching 43.6 million m3 in 2015; b  y 2025, plantations are projected to produce a sustainable wood harvest of over 45 million m3 per year. The most popular products exported from Chile in recent years have been pulp and paper, sawnwood, panels and wood chips. 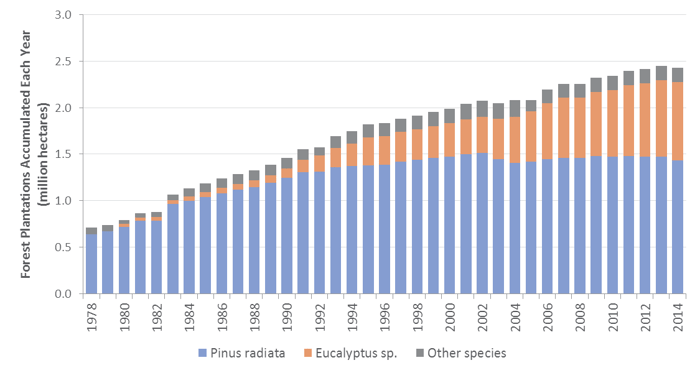 As noted in the chart above, substantial Chilean government incentives over the last 40+ years have helped to drive investment in growing new forested area. Most investment in Chile today originates in the private sector, which has invested roughly $500 million in afforestation efforts and $11.7 billion in wood processing since 1990. The forested plantations today account for nearly 98 percent of the economic output of Chilean forests. This has reduced pressure on natural forest stands. Industrial timber harvesting in natural forest stands fell from 16.1 percent of total timber harvests in 1990 to 0.8 percent in 2013. Overall, there has been an 8 percent increase in Chile’s forested area since 1990.

Due to Chile’s robust and growing forest products industry, the long-term potential for wood pellet and chip production is encouraging. While firewood remains a popular resource for heating purposes, the forest products industry creates ample biomass feedstocks in the form of forest residuals and mill residues and shavings—most of which is used at the processing facilities for electrical generation and steam. Currently, only a handful of pellet manufacturers use this material, and none are on the scale of those in the US South. Most pellet consumption in Chile is for domestic consumer heating purposes.

Wood chip production in Chile occurs at both chip mills that are integrated with sawmills and at stand-alone, dedicated facilities. Most of the integrated mills produce chips from sawmill residues, which are overwhelmingly radiata pine. By contrast, most stand-alone facilities primarily use Eucalyptus as feedstock. Combined, all chip facilities produced just over 10.2 million m3 of chips in 2015, 54 percent of which was radiata pine. Around 63 percent of chips were used domestically, primarily for pulp production, and the rest were exported.

Chilean chips have grown to become the 5th most valuable wood product export for the country at over US$347.3 million in 2016, and Chile is one of the top global exporters of wood chips. Chip exports from Chile totaled nearly 5.3 million metric tons in 2016—an increase of 36 percent from 2015. While exports to China, primarily of Eucalyptus nitens, are increasing, most chips (primarily, Eucalyptus globulus) are still exported to Japan. Japan has been the single largest importer of Chilean wood chips since the mid-1980s.

The following table details the cost components associated with producing and exporting green and dry wood chips, and potential pellet exports, from Chile to ports in East Asia. Under current conditions, the costs for exporting these materials are slightly lower than they are from Brazil due to more favorable transport costs, and Chile offers the same competitively-priced, quality wood fiber. The average minimum delivered cost of chips from a port in Chile would be around US$75 per green metric ton. 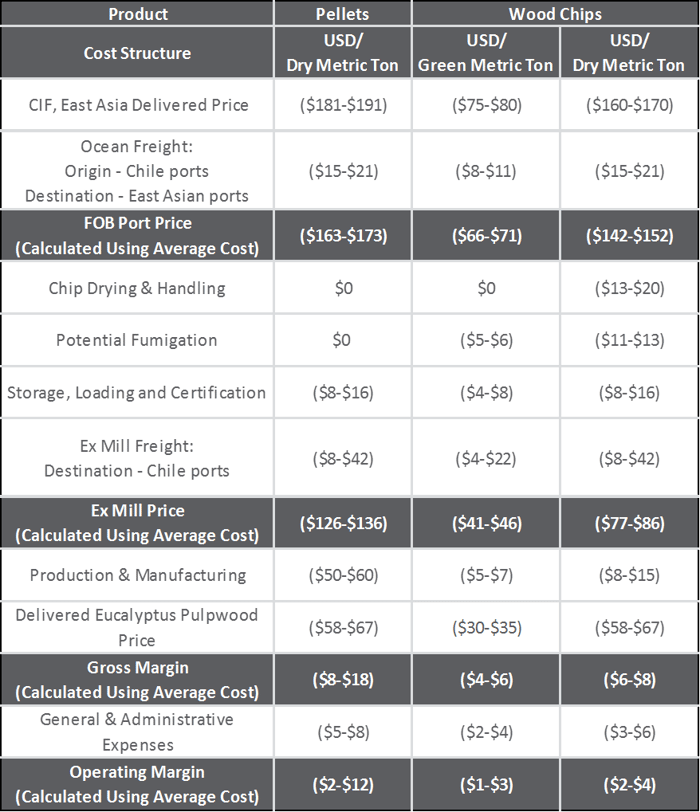