A Critical Balance: Healthy Forests and the Forest Products Industry

A November 17 story in the Yakima Herald-Republic addressed an important issue regarding the symbiotic relationship between working forests, forest health and the forest products industry. It’s an issue that typically gets lost in the contentious, often emotionally-driven, debate about forest management, harvesting practices and sustainability.

Working forests benefit us as consumers, employees and communities, but they also improve the overall health of forests themselves. In what has become a dire situation of overcrowded, dead and decaying forests in many areas of the Pacific Northwest (PNW), journalist Kate Prengaman says that “They're cutting down trees to save this forest.” But in a region where the forest products industry continues to shrink, where do these trees go and, more importantly, can a sustainable balance be achieved in the future?

In Prengaman’s well-reasoned article titled “Future full of doubt for Central Washington timber industry,” she tells the story of a 548-acre logging project on the Naches Ranger District tasked with removing dead/decaying trees that are at risk of catastrophic wildfire. As advocates for sensible forestry and silvicultural practices—including regular thinnings—we recognize that this type of proactive forest management benefits this rural Washington community by reducing fire risk, employing local workers and providing valuable timber to the market. Bret Daugherty, owner of Timbered Rangeland and the local logging company hired to manage the project, noted that the goal of the project is to establish “a well-balanced forest ecosystem."

Timber from the thinning plan is trucked to the Yakama Nation's sawmill in White Swan, which is the only mill remaining in the Eastern Cascades from Yakima County to the Canadian border. But with more than a million acres in need of proper thinnings, there are no other outlets for the wood, which causes an imbalance in the symbiotic relationship mentioned above and, by proxy, the balanced forest ecosystem. Forest inventories will continue to grow unabated as dead, diseased or decaying timber piles up on the forest floor—the ideal fuel for a catastrophic wildfire.

The current dearth of regional mills means that, despite growing concern from both foresters and environmentalists calling for sustainable harvests and thinnings to reduce the effects of fires and restore forest health, no one can realistically (and logistically) get it done on the scale that is needed. "As soon as you lose the mill infrastructure, the industry starts failing," Daugherty said.

In Central Washington, where most timber is state owned, harvests have dropped substantially over the last 20 years as new regulations have made life difficult for mill managers. In 1995, the volume of trees harvested from all land ownership types in Yakima County totaled 149,950 thousand board feet (MBF); just 20 years later, the volume totaled 13,740 MBF. Just 10 percent of the state's timber is now harvested on the eastern slopes of the Cascades, where wildfires have ravaged the forest in recent years.

How did the PNW get here?

As Prengaman notes, the market dynamic in the PNW—and Washington in particular—didn’t change overnight. The regional market suffered as timber harvests on the Wenatchee National Forest (which didn't include the Okanogan until 2003) plummeted to an average of 42,000 MBF in recent years. Much of the decline is due to the 1994 Northwest Forest Plan, which gave spotted owl habitat priority over timber harvests on roughly 30 percent of the forest, according to Forest Service silviculturist Bob MacGregor. 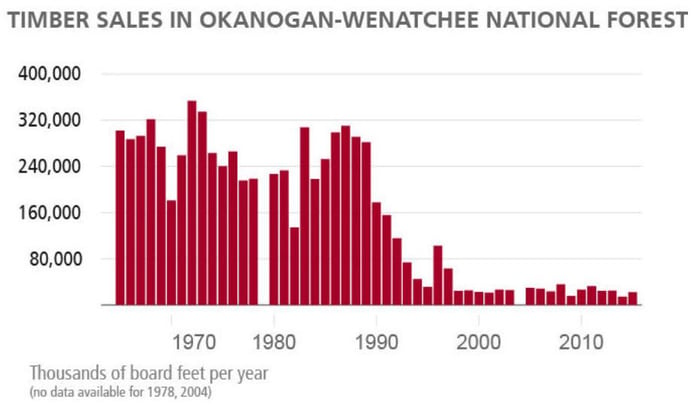 In what has become the environmentalist’s weapon of choice in combatting logging efforts, drawn-out and expensive litigation has delayed or canceled timber harvests on these lands and, combined with the skyrocketing cost of fighting ever-more destructive wildfires, there is little room in the Forest Service's budget for foresters to plan timber sales.

"Now, we are realizing that the fuels are building up heavily in our public lands and we're getting uncharacteristic mega fires and we need to reduce these fuels proactively," said Lloyd McGee of The Nature Conservancy. "That's a natural supply for sawmills, but now we don't have sawmills, so how are we going to pay for that active management that needs to expand?"

"The other problem is on this forest, because the mills are so far away, our wood isn't worth that much," MacGregor added. With very little money raised from a dwindling number of timber sales, there is nothing left for the Forest Service to support road maintenance, recreation and habitat restoration. And so, due to the shortsightedness of environmentalists and subsequent overreaction by state lawmakers, the regional forest products industry—as well as the Forest Service—is stuck in a Catch-22 situation that no one seems to favor.


What can be done?

Despite what many see as an overburdened regulatory environment, forest products still comprise a $26.5 billion industry in Washington. But the activity is consolidated in the western and the northeastern parts of the state where there is more privately-owned forest land. While the case can be made that private forest ownership typically results in better managed forests and healthier forest products markets, it’s too late to turn back the clock in the PNW; the industry must find a new way forward.

Many experts believe the solution is to rebuild—or reshape—the timber industry in the region that will cater to a new kind of consumer of wood raw materials. Rather than focusing on traditional sawmills, for instance, a more modern approach might be to focus on consumers of small logs that are in abundance while encouraging investment from innovative companies that use waste wood for manufactured products or biomass energy.

"I think we need to build an economy around our forest restoration needs," said state Forester Aaron Everett. "It could be biomass, cross-laminated timber, or a small diameter sawmill. We're all a little uncertain about what it looks like, but the value of these forests and our way of life in Central Washington is more than worth the investment."

Innovative wood-based projects are currently experiencing great success in the PNW, including biofuels and bioenergy ventures. For example, the NARA/Alaska Airlines partnership recently sent a Boeing 737 jet on the first commercial airline flight that was partially fueled by a cellulosic biofuel derived from PNW wood residues.

In an attempt to attract further investment in the region, The Nature Conservancy is studying the potential supply of wood raw materials from forest thinnings and restoration projects that can be used as a feedstock. Forward-thinking investors like John Fujii, owner of Neucor Inc., see promise in these projects. Fujii purchased the former Jeld-Wen plant in White Swan and reconfigured it to manufacture proprietary composite wood panels from waste wood derived from the Yakama mill. Production at the Neucor plant started earlier this fall and Fujii said he expects to employ about 120 people once operations ramp up over the next year.

Fujii also has plans to expand in the region using another wood technology, cross-laminated timber (CLT) that will also make use of materials extracted during forest restoration projects. "I have not been bashful about talking to anybody who will listen that we're interested in entering the cross-laminated timber marketplace from White Swan," Fujii said. "The point of CLT is that it does not require large volumes of lumber; we're not talking about huge logging operations, we're talking about thinning operations. All of this will build the forest products activity in Yakima County in a responsible, environmental way that will contribute to economic activity and reduce the fuels for wildfires," he added.

While the forest industry in the PNW has suffered losses in the form of facility curtailments, consolidations and closures over the last 20 years, there is reason for optimism as new efforts are bringing together environmentalists, recreation users, timber interests and forest managers to plan restoration projects. Rather than taking reactionary legal measures that benefit no one, the hope is if everyone benefits from a forest project, the project is less likely to wind up in court and will be more likely to succeed. One such group has helped to plan an upcoming restoration project on more than 15,000 acres that includes commercial timber harvesting, thinnings, prescribed burns, firewood cutting and habitat restoration.

"We owe ourselves better than to set environmental protections against the health of our forests and the economic viability of our communities, and I think this conversation about forest restoration is beginning to break past that." Everett said. "The costs of doing nothing are extraordinarily high, both in terms of our state coffers and the costs to our communities, tragically high in fact."

The valuable wood resources in many of Washington’s forests are either dying on the stump or going up in flames. "We watch fires burn up enough acreage for my crew to live in—30 years worth of logging—go up in one week's time," Daugherty added. "I wonder what they are trying to protect? If the name of the game isn't managing the resource, we might as well let it burn. You don't want us to log it, but you don't want to it to burn? Well, we live in a fire ecosystem so you have to pick your poison, you've got to log it or let it burn."

Prescient words from a man who knows the forest and makes his living there. Kudos to Kate Prengaman for presenting both sides of this divisive issue, and for highlighting the potential for real catastrophe if nothing is done to address the current imbalance between Washington’s forests and its forest products industry.

Log Markets
New Markets for Wood Products Help Preserve Forests for Future Generations
There is an ongoing disconnect that tends to resurface in the debate surrounding the use of woody biomass to create the...
END_OF_DOCUMENT_TOKEN_TO_BE_REPLACED

Forest Management
Locking Up Forests For Carbon Storage Not So Clear Cut
Of the 193 million acres of National Forest System (NFS) lands, less than half (45 percent) are unreserved and...
END_OF_DOCUMENT_TOKEN_TO_BE_REPLACED