A new report from the Oregon Forest Resources Institute provides a detailed look into the current state of Oregon's forests, its forest products industry and much more. The report, Oregon Forest Facts, tells the story of Oregon’s forests via quality data, charts and graphs, and it provides an attractive, accessible snapshot of up-to-date information about the state's forests. The full report is available for download, and the site touches on some of the high-level data that members of the forest industry and the larger public will both find interesting.

Nearly half of Oregon is covered by forests, and roughly 80 percent of this land is classified as “timberland.” Timberland is forested land that productively grows commercial-grade timber, which excludes land with low-growth and reserve areas where logging is restricted, such as wilderness areas and national parks.

While the federal government manages most of the forestland in Oregon, only a fraction of Oregon’s timber harvest occurs on federal land, and most of that is in the form of thinnings. Approximately 75 percent of the total state harvest comes from private timberlands.

The total amount of public and private forestland in Oregon has remained at roughly 30 million acres for more than 60 years (it’s estimated to have been about 30 million acres in the 1600s, as well). Oregon has actively protected its forests, farms and rangeland from permanent and destructive development for decades; 97 percent of all non-federal land in Oregon that was in resource land uses in 1974 remained in those uses in 2014. In that same time period, about 247,000 acres of private Oregon forestland were converted to other uses - mostly to low-density housing. However, Oregon’s loss was less than half the loss seen in Washington state over the same period. 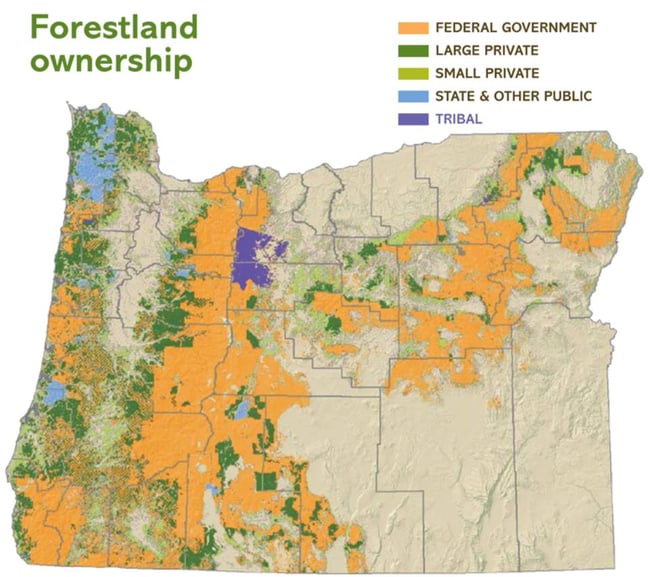 From the end of World War II through 1989, timber harvests in Oregon generally ranged from 7 to 9 billion board feet annually. However, between 1989 and 1995, timber harvest on federal lands dropped nearly 90 percent primarily due to environmental litigation, regulation and related changes in federal management practices. With the exception of the Great Recession period, harvests on private lands have remained relatively stable; by 2013, the harvest had rebounded to 4.2 billion board feet—roughly pre-recession levels. 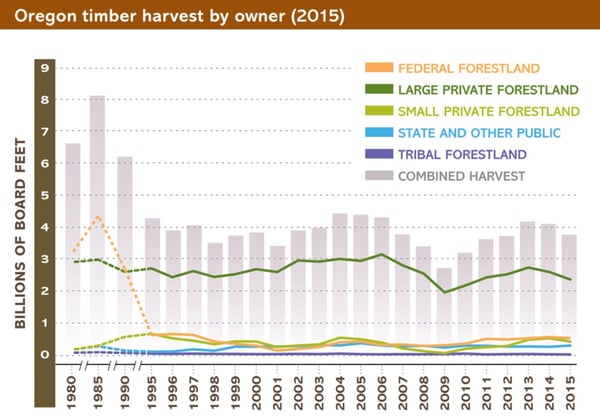 A study by the Oregon Department of Forestry showed that in general, the forestland base is managed for three primary purposes:

US forest industry
Strategic Planning During Downturns with Precise Market Data
It’s difficult to overstate the uniqueness of the current global health (and economic) crisis we find ourselves in....
END_OF_DOCUMENT_TOKEN_TO_BE_REPLACED