US housing starts jumped for two consecutive months to finish out 2021 on a positive note. Homebuilders began construction on 1.7 million new homes in December, which represents a 1.4 percent month-over-month (MoM) increase. For FY2021, new home construction was the strongest it has been in more than a decade. MarketWatch notes that, “Before seasonal adjustments, the number of single-family homes completed in 2021 was the highest since 2007.” 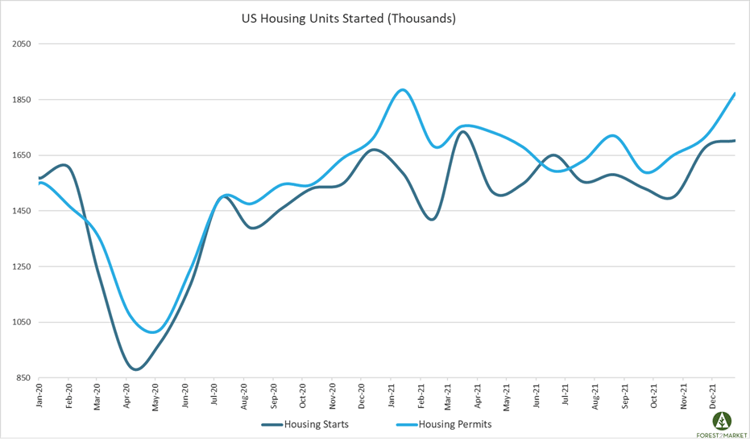 In December, the 30-year fixed mortgage rate jumped from 3.07 to 3.10 – the highest level since June 2020 – and the NAHB/Wells Fargo Housing Market Index (HMI) dropped by one point in mid-January to 83.

Looking more specifically at the single-family metric, after bottoming during the peak of the pandemic lockdowns in April 2020, single-family starts bounced back quickly before cresting in December. For most of 2021, this segment of the market trended downward amid high costs, supply chain strains and labor shortages. However, single-family builds surged in November to their highest level in nine months. 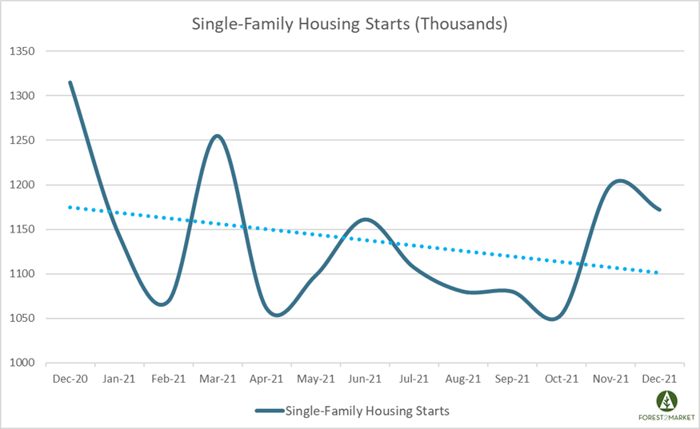 Even though new construction remains steady, builders are proceeding with caution as new homebuilding remains supported by a significant shortage of previously-owned homes on the market.

Per fresh housing market insights published in our most recent issue of the Economic Outlook, the inventory of new homes for sale has been expanding on trend since 3Q2020 in both absolute and months-of-sales terms, concurrent with dramatic upward trends in median and average prices. New-home inventory in November (402,000 units) represented 6.5 months of sales, which has typically been considered a balanced market condition. Inventory of resales, by contrast, has been meandering around an average of 1.2 million units (2.4 months) since bottoming out at 1.0 million units (1.9 months) last December/January; that level of supply is consistent with an extremely tight market.

This dynamic suggests that a substantial share of the new-home market is focused on higher-net-worth households who can acquire “jumbo” mortgages. The proportion of new homes priced at/above $750,000 that sold in November more than doubled YoY to 11.3 percent. The resale market is still available to a wider income demographic, but lower-net-worth households are gradually being squeezed out of that market as prices keep rising. Data on homebuying transactions seem to confirm this trend. E.g., first-time buyers comprised just 26 percent of November resales, down from 32 percent a year ago and matching the lowest share since 2014. All-cash sales accounted for 24 percent of existing-home transactions in November, while investors—who make up many of the cash sales—comprised 15 percent of November contract signings.

Like the rest of the economy, the housing market’s ability to respond to demand will be affected by supply chain behavior in addition to mortgage rates. Analyst Bill McBride estimates that “supply chain issues have delayed the completion of somewhere between 70,000 and 150,000 single family homes that would have normally been completed by November.” Mortgage rates have been inching higher in rough parallel with 10-year Treasury rates. “We expect rates to continue to increase into 2022,” said Freddie Mac’s Sam Khater, “which may leave some potential homebuyers with less room in their budgets on the sideline.”

Indeed, rising rates in combination with high costs and other stressors have the ability to constrain housing market growth in 2022. Christopher Rupkey, chief economist at FWDBONDS added, “With mortgage rates already rising with several Fed rate hikes cocked and ready, this year is likely to be sideways at best for residential home builders. It will be interesting to see if higher mortgage rates cool the housing bubble in prices because the lack of new supply will likely remain the dominant trend for another year.”

Housing Market
Housing Starts Plunge to Lowest Level in 19 Months
After jumping 12% in August due in part to strong demand from the multi-family construction sector, US housing starts...
END_OF_DOCUMENT_TOKEN_TO_BE_REPLACED

Lumber Prices
Southern Lumber Prices Continue to Inch Down
After jumping 12% in August due in large part to strong demand from the multi-family construction sector, US housing...
END_OF_DOCUMENT_TOKEN_TO_BE_REPLACED

Lumber Prices
SYP Lumber Prices Stabilize; Is More Volatility Around the Corner?
By late June, the price for finished southern yellow pine (SYP) lumber had tumbled 59% from its 2022 high mark of...
END_OF_DOCUMENT_TOKEN_TO_BE_REPLACED