Despite a December Dip, Housing Starts Finish 2015 on Forecast

While the housing starts metric stayed on course during December to finish 2015 just above its 1.1 million unit forecast, the final monthly number was surprising and disappointing to economists and industry watchers alike. The lackluster performance followed double-digit gains in November, unseasonably warm weather throughout most of the country for much of December, as well as 45,000 additional construction jobs—all of which was expected to boost activity. 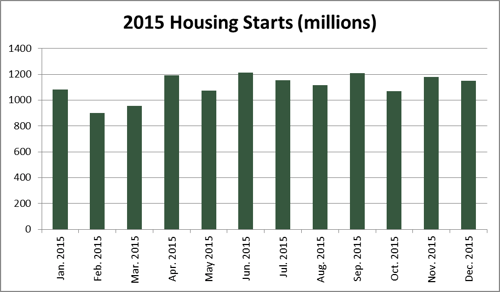 The US Census Bureau report on December housing starts also highlighted the disparity in construction activity across regions. Seasonally-adjusted housing starts by region were:

While the decline in Southern building activity is surprising given the abnormally warm weather in December, the Northeast and South were the only regions to post gains for 2015 on the whole.

Despite the numbers, home builders continue to remain upbeat; The National Association of Home Builders’ sentiment index stayed at 60, unchanged over last month. That said, December’s construction slowdown also comes at a time when potential home buyers are facing the prospect of higher mortgage rates. As we noted last month, the Federal Reserve’s symbolic fractional short-term interest rate hike might affect home buyers in 2016, although the 30-year fixed mortgage rate actually ticked down last week from 3.97 to 3.92.

Ralph McLaughlin, chief economist at the popular real estate website Trulia, wrote that "Compared to historical norms, new construction starts are 75 percent back to normal. Given the tight inventory that we've seen in many housing markets across the country, today's release is a positive sign for new housing starts. For prospective homebuyers, this is a positive sign that we expect some relief of tight inventory, especially in the costly coasts, where starts are up 26.8 percent in the Northeast and 13.4 percent in the West [year over year]."

The larger housing market, in general, continues to be one of the lone bright spots in the US economy. We are still ten months away from electing a new president, but a heightened degree of hesitation exists in an already—and historically—uncertain election year. Consider the following:

None of these dynamics are conducive for creating an environment that would provide the reasonable certainty to drive economic growth. Despite the evidence, many economists remain optimistic about housing’s ability to remain unscathed by these larger events. Gregory Daco, head of U.S. macroeconomics at Oxford Economics in New York, recently said that some fundamentals are providing strength to the housing market. "Slowly strengthening wage growth, solid employment gains, the gradual release of pent-up demand, and still-low mortgage rates all underpin our expectation of a continued strengthening in housing activity over the course of 2016.”

Supply chain
Australia: Demand for New Housing & Lumber Collapses
In March 2020, before the COVID-19 pandemic gripped the global economy, there were 15,386 new dwellings approved in...
END_OF_DOCUMENT_TOKEN_TO_BE_REPLACED

Housing Market
March Housing Starts Freefall in Wake of Pandemic
Not surprisingly, US homebuilding dropped sharply in March as the COVID-19 pandemic continues to wreak havoc on...
END_OF_DOCUMENT_TOKEN_TO_BE_REPLACED