Despite Recent Closures, US Creates Opportunities for Swedish Sawmills

Per a December 2016 industry report published by Denmark-based Danske Bank in its Skog & Ekonomi newsletter, Sweden’s softwood lumber output is expected to fall by an estimated 450,000 m³ per year in 2016/2017. The report noted that three recent sawmill closures and other capacity reductions announced by Swedish forest products manufacturer Södra will alone account for a 325,000 m³ decline in output per year. There have been scores of other regional mill closures and consolidations over the last few years that will affect softwood lumber output in 2017. 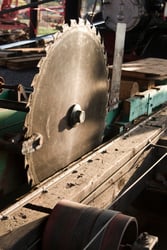 and process improvements made at several sawmills that will eventually result in increased output. Danske Bank also recently wrote that the evidence suggests that Donald Trump's election will continue to drive the American economy, and his promises of investments in infrastructure, tax cuts and trade revisions will benefit the Swedish sawn timber market.

The global forest products value chain has been forced to adapt since the Great Recession of 2008, and Sweden has been no exception. Following some initial consolidations and closures in the immediate aftermath of 2008, notable sawmill consolidations in 2016 and 2017 include:

With consumption (production + imports) totaling roughly 75 million m3, the US is the largest consumer of softwood lumber in the world. Sweden currently exports very little lumber to the US, with only around 230,000 m3 shipped during the last 12 months. If Danske Bank is correct in its assessment of expanding opportunities due to the “Trump effect,” the US demand for softwood lumber could swell. With stable US housing starts, no new Softwood Lumber Agreement (SLA) solution in sight, reduced production in Canada due to the mountain pine beetle outbreak and a reduction in allowable annual cuts (AAC), this opens up new opportunities for global exporters.

Despite the active restructuring that has been taking place in the Swedish forest products industry over the last few years—as well as the forecasted decrease in lumber output for 2017—the industry is nevertheless well-positioned to take advantage of these new opportunities in the US.

Lumber Prices
Softwood Lumber Prices Tumble 40%; Is Another Rally on the Horizon?
The volatile North American softwood lumber market continues to keep us all guessing as we enter mid-2Q2022. After...
END_OF_DOCUMENT_TOKEN_TO_BE_REPLACED

Log Markets
War in Ukraine Will Tighten Lumber Markets in Europe, China and The US
One immediate impact of the war in Ukraine and the sanctions by Western countries has been a dramatic reduction in...
END_OF_DOCUMENT_TOKEN_TO_BE_REPLACED