Diverse Uses of Woody Biomass in Europe and U.S.

As energy sources go, woody biomass from forest residues has been reliably and sustainably fueling human civilization for thousands of years. Many modernized countries now have access to a broad energy portfolio that includes nuclear, wind, solar and hydro power generation, but much of the world—2.8 billion people in fact—still relies solely on some form of biomass for both cooking and heating. To put that number in perspective, that’s nearly 40 percent of the earth’s population. That’s also a whole lot of wood. Consider just a sliver of the data from around the globe:

As impressive as our modern energy-producing technology might be, these systems also have limits and are not without their own sets of risks; it may be decades before the immediate area within the Fukushima Daiichi nuclear site in Japan will be inhabitable in the wake of the tragic 2011 meltdown. Within the global energy conversation, Forest2Market has continued to stress that woody biomass from forest residues has an important role to play in modern energy production. Whether used as a co-fired feedstock at a large electricity plant, a primary feedstock at a small-scale plant or a heating source for individual homes, wood has performed reliably and economically for thousands of years. And when managed and procured responsibly, wood is a sustainable and clean source of energy. 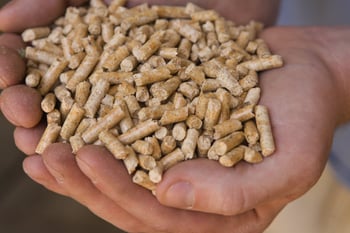 Forest residues are generally ubiquitous, and the flexibility and diversity that woody biomass materials offer make them unique as an economical feedstock. Unlike many other fuel sources, woody biomass is an on-demand source of energy that requires very little, if any, processing or refining. As noted above in the Australian data, over a million households rely solely on cut firewood, which only requires a saw and labor to produce. Other wood-based fuel types, such as wood pellets, also require very little in the way of manufacturing and the end result is still a 100% natural product.

Because of its scalability and flexibility, woody biomass is gaining popularity in Western nations as energy usage and costs increase and the desire to maintain some level of energy independence continues to be a priority in the uncertain global economy. We have written extensively about the large-scale usage of wood pellets by some of Europe’s leading electricity producers, including Drax Power in the UK and DONG Energy in Denmark. But there is a renewed interest in woody biomass in other European markets and on this side of the pond as well. Recent examples include:

With winter fast approaching, many of these state-funded programs remain top-of-mind in areas with colder climates. In the case of Lightwater Valley—and much of Europe, for that matter—general awareness of biomass as an energy source is more prevalent than it is in the US simply because it is being utilized and is increasingly visible. But as more consumers become aware of the benefits of renewable energy derived from forest biomass, the increased interest encourages investment in America’s forests and growth within the forest products industry. Such interest is good for America’s energy portfolio and our working forests, and it fosters a widespread awareness for the many advantages that woody biomass offers as a clean, renewable source of energy.

Bioenergy
Forest Service Announces Investments in Wood Energy and Innovation
The Guardian recently published a piece supporting the likelihood that the COVID-19 pandemic will have a drastic...
END_OF_DOCUMENT_TOKEN_TO_BE_REPLACED

Bioenergy
How is COVID-19 Impacting the Global Bioenergy Sector?
The COVID-19 pandemic may have temporarily changed the way a number of businesses interact with customers, but those...
END_OF_DOCUMENT_TOKEN_TO_BE_REPLACED