Energy Programs in the 2012 Farm Bill

5-Year Farm Bill passes through Senate, stalls in the House In June, the Senate passed the 2012 Farm Bill with bipartisan support (the final vote was 64-35). Included in that bill is $800 million in mandatory funding to support the Bill’s energy title. This is 23 percent less than funding in the 2008 Farm Bill.

The House Committee on Agriculture completed its own version of the Bill, where it passed out of committee with a bipartisan vote of 35-11. House leadership, however, refused to allow the bill to come to a full vote before the August recess. Instead, House members went against the body’s standard for developing major legislation and--outside the purview of the Agriculture Committee--drafted a one-year extension of the 2008 Farm Bill that stripped the Energy title of all mandatory funding. Unable to gather enough support to pass the one-year extension, House leadership failed to bring that bill to the full House for a vote as well.

Funding for energy programs in the two versions of the 2012 Farm Bill is similar, as the following table shows. 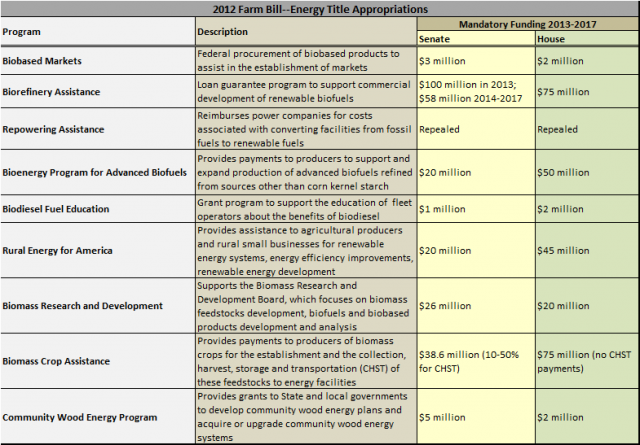 The 2008 Farm Bill expires September 30. Congress comes back in session September 10 and will work just eight days before they recess again to campaign for November elections. If the House fails to bring the Farm Bill to a vote in that window of time, the Farm Bill, including funding for the energy programs, will expire.

Because it is an election year, the most likely path for the passage of the 2012 Farm Bill is this:

If you would like to urge your representatives in the House to act on the 2012 Farm Bill, you can find there contact information here.

Bioenergy
Biomass Power: Championing Renewable Resources
As we wrote just a few months ago, the ground is beginning to decisively shift regarding the topic of climate...
END_OF_DOCUMENT_TOKEN_TO_BE_REPLACED

Bioenergy
Forest Service Announces Investments in Wood Energy and Innovation
The Guardian recently published a piece supporting the likelihood that the COVID-19 pandemic will have a drastic...
END_OF_DOCUMENT_TOKEN_TO_BE_REPLACED