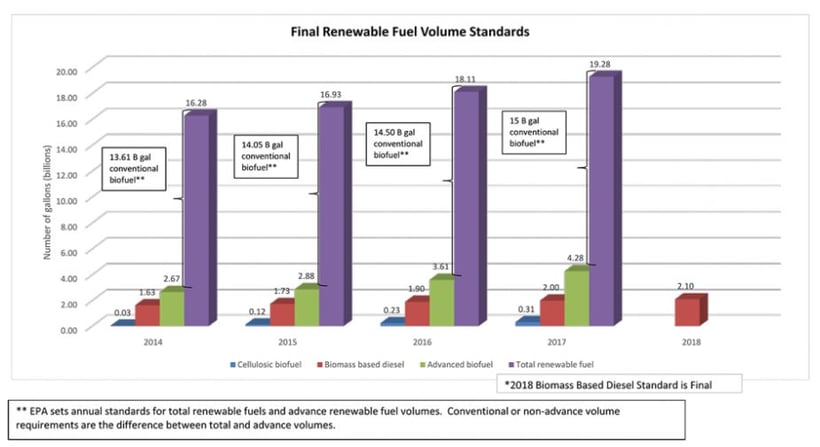 “Renewable fuel volumes continue to increase across the board compared to 2016 levels,” noted Janet McCabe of EPA. “These final standards will boost production, providing for ambitious yet achievable growth of biofuels in the transportation sector. By implementing the program enacted by Congress, we are expanding the nation’s renewable fuels sector while reducing our reliance on imported oil.”

Bob Dinneen, president and CEO of The Renewable Fuels Association is pleased with the finalized 2017 volumes. He stated, “The move will send a positive signal to investors, rippling throughout our economy and environment. By signaling its commitment to a growing biofuels market, the agency will stimulate new interest in cellulosic ethanol and other advanced biofuels, drive investment in infrastructure to accommodate E15 and higher ethanol blends, and make a further dent in reducing greenhouse gas emissions.”

Dinneen added, “The final RVO rule helps put consumers in the driver’s seat when it comes to fuel choice at the pump and we thank EPA for listening to the public’s demand for lower cost, higher octane fuels, recognizing the rising demand for gasoline and abiding by the statute. We look forward to getting the RFS back on track, providing the consumer savings, carbon reductions and energy security benefits envisioned by Congress.”

The Advanced Biofuels Association also had a generally positive response to the news. Michael McAdams, president of the Association said, “We congratulate EPA on getting the RVO rule out ahead of schedule. Like last year, it sends a clear signal to the market of the federal government’s intention to stand behind the RFS program. We are also happy to see the confidence and support of the biomass-based diesel pool by continuing to recognize the fact it is growing steadily. And, we welcome increases in both the advanced and cellulosic pools. Those are truly the fuels of the future that deliver the most significant contribution to sustainability.”

While we have advocated that advanced and cellulosic biofuels need the opportunity to compete on a level playing field with fossil energy if we are serious about implementing renewable energy solutions, the current political climate offers little in the way of long-term certainty regarding this reality. A level market would bolster the investment community and maintain interest in the pioneering biobased products that will contribute to a cleaner, greener economy. But as the world prepares for what could be a drastic administration change in Washington, the global stock indices are betting on a continued, heavy reliance on fossil energy.

As we have noted on a number of occasions, the real hurdle for renewable energy is not that it is too expensive; rather, it’s that fossil energy remains artificially too cheap. Fossil energy is the largest subsidized sector in the global economy. According to a 2015 International Monetary Fund (IMF) estimate, fossil fuel companies are benefitting from global subsidies equaling $5.3 trillion a year, which is equivalent to $10 million a minute, every day of the year. To put that number in perspective, the estimate is also greater than the total health spending of all the world’s governments.

That said, the reality is that sweeping industry change is oftentimes painfully slow. That the EPA has published markedly higher volumes for 2017 (in most cases) is a positive development for the broad biofuels sector. As Monte Shaw of the Iowa Renewable Fuels Association noted, “The RFS ethanol volumes announced by the EPA today mean higher income for farmers and lower prices for consumers.  They mean more jobs in rural Iowa and less dependence on foreign oil. This is the type of RFS support that the Obama Administration pledged eight years ago. There was a bit of a detour, but this final action restores the RFS as a powerful tool to crack the petroleum monopoly.”

While Mr. Shaw is largely referring to corn-ethanol producers regarding his positive outlook, a rising tide (generally) lifts all ships. Manufacturers of other cellulosic and advanced biofuels still have reason to believe the RFS will work for them too.

Bioenergy
Biomass Power: Championing Renewable Resources
As we wrote just a few months ago, the ground is beginning to decisively shift regarding the topic of climate...
END_OF_DOCUMENT_TOKEN_TO_BE_REPLACED

Bioenergy
Forest Service Announces Investments in Wood Energy and Innovation
The Guardian recently published a piece supporting the likelihood that the COVID-19 pandemic will have a drastic...
END_OF_DOCUMENT_TOKEN_TO_BE_REPLACED