Global sawlog price changes were mixed in 1Q22 with quarter-over-quarter (QoQ)  increases in North America and Eastern Europe, while prices declined in Central and Northern Europe, reports the Wood Resource Quarterly. While the price changes from the 4Q2021 to 1Q22 have only been modest, the current price levels are much higher than they were a year ago. 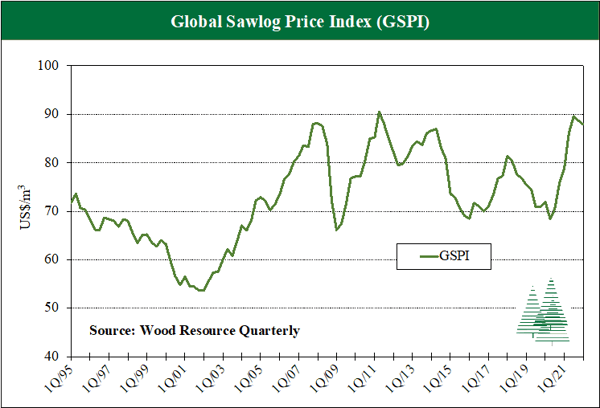 Global trade of softwood logs slowed substantially in early 2022 because of reduced house construction and remodeling activities in Europe, North America, and Asia. As a result, worldwide trade fell over 20% year-over-year (YoY), with the most significant declines occurring in imports to China (-42%), India (-32%), South Korea (-14%), and Austria (-14%).

Exporting countries that reduced shipments the most during the first quarter of 2022 were Russia, New Zealand, Germany, and the Czech Republic. Practically no softwood logs were exported from Russia in 2022, a result of the Russian log export ban implemented on January 1, 2022, and the trade sanctions because of the Ukrainian war. The current almost non-existent trade flow marks a sharp deviation from former quarterly shipments, ranging between 1-2 million m3 during the past few years. Exports from New Zealand, the world’s largest log exporter, fell to 4.6 million m3 in 1Q22, the lowest level in two years.

Timber Prices
Southern Timber Prices Continue to Trend Lower in 3Q2022
Following a 15-year peak in 1Q2022 and a sharp decline in prices in 2Q2022, the weighted average price for southern...
END_OF_DOCUMENT_TOKEN_TO_BE_REPLACED

Timber Prices
Halt in Russian Exports, Reduced Demand in China Contributed to a 20% Decline in Global Softwood Log Trade
Global trade of softwood logs plunged by 20% during the first half of 2022 year-over-year (YoY). Much of the decline...
END_OF_DOCUMENT_TOKEN_TO_BE_REPLACED

Timber Prices
Hurricane Ian Threatens Stressed Timber Supply Basin
Hurricane Ian is slated to build significant momentum in the coming days as it crosses the western side of Cuba and...
END_OF_DOCUMENT_TOKEN_TO_BE_REPLACED