Despite its many benefits, the potential that new greenfield biopower facilities will be built in the United States in the next few years is low. A combination of factors, from high capital costs to low electricity prices (the result of low natural gas prices) to an uncertain regulatory environment, all present obstacles for the industry’s growth.

Over the course of the last few years, some existing biomass power plants have closed because of difficulties related to these same obstacles. Maine and California have been particularly hard hit. Existing biopower facilities may be down, but they are far from out. Pockets of opportunity for investors interested in existing asset sales exist.

In February 2017, for instance, an Alabama company, 42 Railroad Ave purchased the closed 24MW Sherman Station in Stacyville, Maine. 42 Railroad Ave’s CEO Steven Johnson has plans to rebuild the turbine, activate new transmission lines and build a rotary kiln that will produce activated carbon, which is used as a filter for air and water. The plant is currently in the re-permitting process. Johnson believes that because of an executive order signed by President Trump, the permit can be fast tracked. When it reopens in June 2017, Sherman Station will have the capacity to consume 700 tons per day (250,000 tons per year) of wood fiber. The improvements, as well as the addition of another end-product will improve the plant’s profitability. Johnson believes 42 Railroad’s $10 million investment will produce a solid return of $34 million annually.

42 Railroad’s strategy—buy an existing asset and then maximize its value by making relatively inexpensive upgrades and looking for add-on products—is a model that can be replicated. Let’s look at California, another market where closures have changed the scope of the industry significantly since the 80s.

One of California’s biggest challenges is that pricing in most current power purchase agreements overlooks multiple factors that make biomass power ideal.

In 2014, California’s legislature attempted to remedy the first of these items with HB 2363, which was signed into law; in 2017, that bill is still wending its way through rulemaking process. Once in place, however, it will put in place a “renewable integration adder” that requires the California Public Utilities Commission to develop grid integration costs for all renewable technologies so that the bidding process is more balanced. Because solar and wind are non-traditional and intermittent sources of electricity, getting this energy to the grid and then storing the energy until it is needed are expensive. These new rules will take those costs into consideration when choosing the “best-fit, lowest-cost” sources of energy for the state’s portfolio.

One company likely to benefit from these rules once they are in place is Greenleaf Power. The company currently has two facilities in California (as well as one in Connecticut and one in Quebec).

Greenleaf Power acquired Desert View (DVP) in 2011, which is under a long-term power purchase agreement with Imperial Irrigation District in Southern California. A 47 MW biopower facility, DVP is located approximately 40 miles east of Palm Springs in Riverside County, California. The plant is a qualified in-state, base-load renewable resource that has been consistently providing renewable energy since 1992.

Among DVP’s assets are two Combustion Engineering circulating fluidized bed boilers and one Siemens steam turbine generator set to generate between 350,000 and 375,000 MWs annually. The boilers are equipped with multi-clones and baghouses for particulate control, ammonia injection for NOx control, limestone injection for sulfur dioxide control and hydrated lime for HCl and sulfur dioxide control.

Each year DVP burns between 360,000 and 390,000 tons of urban wood waste, orchard removal trees, and fruit pits. The majority of the fuel is in the form of urban wood waste that is diverted from regional landfills allowing local jurisdictions to meet AB 939 mandated recycling diversion targets. Orchard material is consumed at DVP to satisfy local air quality offset requirements. 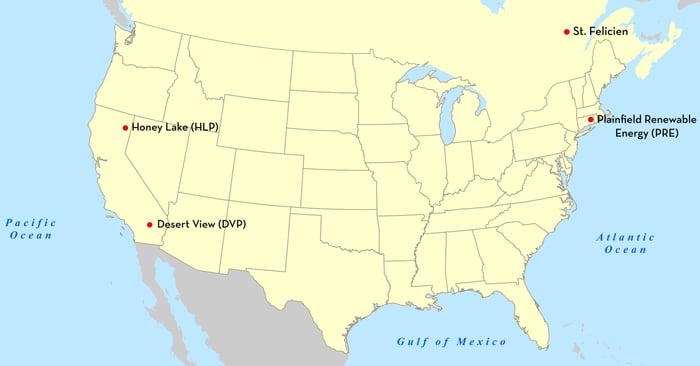 Greenleaf Power acquired Honey Lake (HLP) in 2010, which is under a long-term contract with San Diego Gas & Electric. A 30 MW biopower facility located approximately 20 miles east of Susanville in Lassen County, California. The plant is a qualified in-state, base-load renewable resource that has been consistently providing renewable energy since 1989.

Each year, HLP burns between 150,000 and 200,000 tons of woody biomass from forest-derived fuel, urban wood waste and sawmill byproducts. Additionally, the project uses geothermal groundwater from local wells to preheat its boiler-feed water, reducing the plant's consumption of biomass.

While the growth in biopower production is at a standstill at the moment, investors interested in taking advantage of new executive orders and rulemaking will find value in looking for existing biopower assets that are good candidates for add-on products or even co-locating with complementary industries like biofuels and biochemicals, just as the most forward-thinking pulp and paper companies did when demand for writing papers and newsprint began to fall. This kind of innovation could be the key to the future of biopower.