Global economic indicators have plunged at an alarming rate over the last three weeks as the coronavirus pandemic has tightened its grip on global markets spanning nearly every sector imaginable.

It’s too early to tell how it will impact the US housing market in the near and long terms, however, as the virus-induced panic we’re witnessing is without recent precedent.

While US homebuilding showed signs of moderating in early February, the final numbers weren’t bad… all things considered.

The 30-year fixed mortgage rate plunged in February from 3.62 to 3.47, the lowest level since 2016. According to the latest National Association of Home Builders (NAHB)/Wells Fargo Housing Market Index (HMI), homebuilder confidence dipped two points lower to 72 in mid-March.

The numbers seem good on paper, however: “It is important to note, half of the builder responses in the March HMI were collected prior to March 4, so the recent stock market declines and the rising economic impact of the coronavirus will be reflected more in next month’s report,” said NAHB chief economist Robert Dietz.

For February’s analysis, we’ve chosen to look at the most recent two years’ worth of housing starts data to visualize trailing averages rather than month-over-month (MoM) performance. Trailing averages allow us to compare a measurement against a similar measurement from a prior term to decipher how much growth (or loss) was realized. Based on that growth, trailing averages also provide a more representative snapshot of overall performance over time, as well as growth trajectory. 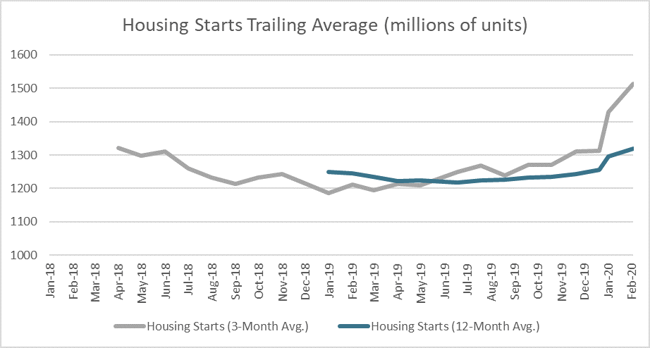 Judging by the chart above, one would assume housing starts were just entering a significant boom period. However, the data doesn’t account for the surreal developments of the last four weeks.

While the US homeownership rate rose to a six-year high in 4Q2019—led by gains among young people and low-income Americans—the COVID-19 situation is creating a “new normal” in ways previously unimaginable.

The FED took its most dramatic step since the Great Recession of 2008 when it recently announced a cut to its target interest rate near zero, which will take the target range for the federal funds rate down from the 1.25 percent range to the 0.25 percent range. Such a move doesn’t leave much wiggle room should the situation further deteriorate.

Based on the extremely fluid situation and abundance of caution, commercial and residential building is grinding to a halt. The reality of the situation is likely to show up in the forthcoming economic data—including next month’s housing starts numbers.

The trend above will undoubtedly change and track downward in the coming months. Let’s just hope the steady progress the sector has built upon over the last two years is strong enough to sustain even the unthinkable.

Housing Market
May Housing Starts Rebound; Have We Hit Bottom?
After plunging two consecutive months (30 percent in April alone) to the lowest level since early 2015, US...
END_OF_DOCUMENT_TOKEN_TO_BE_REPLACED

Housing Market
Australia’s April Housing Approvals Push the Cliff Further Into 2020
Expectations of a massive decline in dwelling approvals in April moved out another month, as seasonally adjusted...
END_OF_DOCUMENT_TOKEN_TO_BE_REPLACED

Housing Market
April Housing Starts Plunge 30%; Is the Bottom Within Sight?
After tumbling over 18 percent in March, US housing starts plummeted another 30 percent in April to the lowest level...
END_OF_DOCUMENT_TOKEN_TO_BE_REPLACED