After months of positive momentum, US housing starts finally encountered significant resistance in February as the severe cold that gripped many parts of the country likely impacted performance in the homebuilding sector. A closer look at some of the underlying factors, however, suggests even more headwinds are in store for housing as we approach 2Q and more accommodating building conditions.

Privately-owned housing starts were down 10.3 percent in February to a seasonally adjusted annual rate (SAAR) of 1.421 million units. Single-family starts decreased 8.5 percent to a rate of 1.040 million units; starts for the volatile multi-family segment declined 15 percent to a 381,000 annualized pace.

The 30-year fixed mortgage rate inched up in February from 2.74 to 2.81, and speculation is that rates are likely to increase in the coming months. The NAHB/Wells Fargo Housing Market Index (HMI) fell by two points to 82 in mid-March. 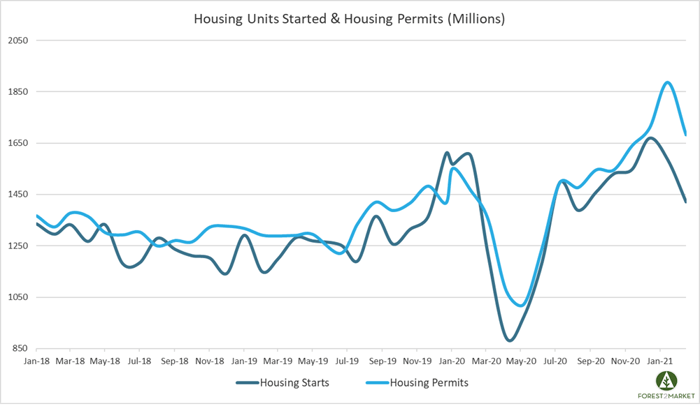 Per housing market insights published in our most recent issue of the Economic Outlook, last year’s run-up in lumber prices was not entirely demand-driven. In addition to the better-known impacts on sawmills, COVID-19 also shut down wood treating plants and caused supply chain headaches that lasted for months, and the ripple effects helped to push prices higher. Lumber prices still remain at historically high levels.

An article by Zillow confirmed that a higher velocity of sales (i.e., fewer days on market) helped the existing-home market transition to both higher sales volumes and lower inventory levels during 2020. E.g., in June 2020, homes were on the market a median of 16 days, five fewer days than in June 2019; by December 2020, time on market was 17 days, or 25 fewer days than December 2019. “Like a warehouse transitioning to just-in-time inventory management, the U.S. housing market became more streamlined in 2020, with typical home sales occurring much more quickly after initially being listed,” wrote Zillow’s analysts. “And because homes were on the market for so much less time before selling, there was a much smaller stockpile of listed homes observed at any given point in time—what we refer to as inventory.” This transition has the potential to redefine what constitutes a “normal” level of inventory “as long as time on market remains low.”

How long demand may stay so elevated is an open question. High Frequency Economics’ Rubeela Farooqi recently mused about whether there is “froth coming off the housing sector.” She pointed to the trend in mortgage applications data: The number of people applying for homes is high but no longer climbing. Also, rising mortgage rates, which have “rebounded sharply” during recent weeks, could push many buyers out of the market due to affordability challenges.

“While single-family starts for the first two months of the year are 6.4% higher than the first two months of 2020, there has been a 36% gain over the last 12 month of single-family homes permitted but not started as some projects have paused due to cost and availability of materials,” says NAHB chief economist Robert Dietz. “Single-family home building is forecasted to expand in 2021, but at a slower rate as housing affordability is challenged by higher mortgage rates and rising construction costs.”

It's tough to tell at this juncture whether or not one month of significant resistance is enough to suggest that the current housing cycle may have peaked. If we’ve learned anything from the unusual and unprecedented events of the last year, it is this: never count out the US housing market. However, rising interest rates, inflationary pressures (surging prices for fuel, raw materials, consumer goods, etc.), and sky-high lumber prices will continue to cause near-term affordability challenges. Just how difficult will this combination of factors be for US homebuilding? Share your thoughts below.

Lumber Prices
SYP Lumber Prices Stabilize; Is More Volatility Around the Corner?
By late June, the price for finished southern yellow pine (SYP) lumber had tumbled 59% from its 2022 high mark of...
END_OF_DOCUMENT_TOKEN_TO_BE_REPLACED

Housing Market
Housing Starts Tumble to Lowest Level in 17 Months
After a disappointing May and June, US housing starts continued to lose momentum in July as the housing market cools...
END_OF_DOCUMENT_TOKEN_TO_BE_REPLACED

Housing Market
Lower Housing Starts, Higher Home Prices, and Surging Inflation
After a disappointing May (-14%), US home building continued to inch down in June as the housing market cools amid...
END_OF_DOCUMENT_TOKEN_TO_BE_REPLACED