Finland continues to lead by example when it comes to utilizing its forest resources in practical, innovative and sustainable methods. The country has a robust forest products industry and recent developments further demonstrate its commitment to maintaining a strong forestry legacy. While softwood timber and lumber will always be popular Finnish exports, the country is home to some of the most advanced companies in the cellulosic biofuel and renewable energy sectors.

Earlier in the summer, we reported on Finnish company St1 and its construction of the world’s first facility to produce bioethanol from softwood sawdust—a venture slated to begin operations in 2016 that has real potential for commercial-scale production. We also covered Finland’s dedication to renewable energy, noting that roughly 37 percent of its gross final energy production comes from renewable sources, including forest biomass. More recently, we have examined the increased demand and competition that the Finnish forest products industry is facing, as the country is the sixth largest pulp producer in the world.

This week, innovative Finnish energy and technology company, Fortum, announced that it had delivered its first export batch of bio-oil produced in Finland, which was tested last week by international energy supplier E.ON at its Karlshamn power plant in Sweden—one of the largest power plants in Scandinavia. Bio-oil is a wood-based fuel oil manufactured from forest raw materials, including forest residues, wood chips and sawdust. Fortum notes that energy produced with bio-oil can reduce greenhouse gas emissions by more than 90% compared to fossil fuels. 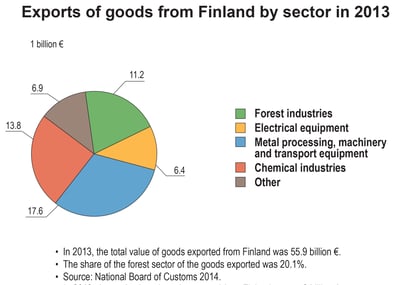 While bio-oil is currently being used by some smaller heating plants within Finland, E.ON is Fortum’s first customer outside of the country. For the Karlshamn test, Fortum supplied four tanker truckloads (roughly 42,000 gallons) of bio-oil, which was incinerated at an output of 175 megawatts.

Thus far, bio-oil has been used in Finland at Savon Voima’s heat plant in Iisalmi and at Fortum’s own heat plant in Joensuu, which is the first commercial-scale facility to produce biobased fuel oil from forest biomass. Fortum says that, in the future, bio-oil can be used as a raw material for various biochemicals or traffic fuels.

Henrik Svensson, Plant Manager at E.ON Karlshamn stated, “We have purposefully developed the Karlshamn power plant to decrease environmental impacts. The bio-oil test combustion period provided further assurance that we can use biofuel in place of some of the heavy fuel oil in the future.”

Fortum also notes that the annual production capacity of bio-oil at the Joensuu plant is over 13,000,000 gallons, which is equivalent to the heating needs of more than 10,000 single-family homes. This is a significant development for both the biobased fuel sector and the forest products industry as a whole. Commercial-scale production of fuels and chemicals derived from forest residues is underrepresented on a global basis. Once again, a Finnish company has brought a successful and innovative product to market that has been derived from one of the country’s greatest renewable resources: the raw materials within its working forests.

Bioenergy
The Value of Carbon Emission Avoidance with Biopower Generation
Per a recent report published by the National Petroleum Council (NPC)—an advisory committee that represents the...
END_OF_DOCUMENT_TOKEN_TO_BE_REPLACED

Bioenergy
WSJ’s Incomplete Reporting Perpetuates Misconceptions About Bioenergy
A recent article published in the Wall Street Journal notes that the increased consumption of wood pellets in the...
END_OF_DOCUMENT_TOKEN_TO_BE_REPLACED