The most densely forested countries in Europe, Finland and Sweden—with their ideal growing conditions for conifers, easily workable and valuable tree species, good harvesting conditions and infrastructure and accessibility to major European markets—have a robust and prosperous forest products industry. In 2014, the countries were the largest pulp producers in Europe, representing more than 60 per cent of total European pulp production (36.5 million tonnes) and 13 per cent of global pulp production (173 million tonnes). Sweden is the world’s fifth largest pulp producer, and Finland is the sixth. They follow just Brazil, Canada, the United States, Chile and Indonesia. Scandinavia also has a world-class sawn wood industry, which will be the focus of follow-on articles.

Despite being a high production region, Scandinavian countries are facing increasing pressure from global competitors with lower wood costs. The figure below illustrates the relative cost positions of the major pulp producing regions in the world. Coniferous fiber costs in Scandinavian countries are on the higher end of the scale, with both the US South and Southern Brazil being advantaged from this perspective. 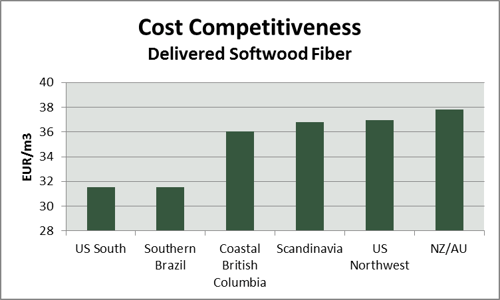 As competition has grown, however, so has demand. The global increase in demand for conifer pulp has led to a series of announcements for new production capacity. The Metsä Fibre pulp/bioproduct mill scheduled to open in central Finland in 2017 will be the largest ever investment in the forest industry in Finland, at 1.1 billion EUR. With an annual pulp production capacity of 1.3 million tonnes, the mill will increase consumption by 4 million m3 of roundwood on a yearly basis. In addition, a number of other pulp/bioproduct mill projects have been announced, some for the construction of new capacity and others for expanding the capacity of current facilities.

The Effect of New Demand on Timber Supply

On the surface, it appears that Finland’s forests are capable of meeting this additional demand. Forest area has remained almost unchanged in Finland over the last 50 years, and the volume of growing stock has increased more than 40 per cent over the same period. In 2013, growing stock volume in Finnish forests was 2,357 million m3 (over bark), and the annual growth rate was approximately 100 million m3 (in 2013: 104 million m3). In addition, 10 million m3 of roundwood was imported in 2013, for a total of 110 million m3. At the same time, industrial roundwood consumption in the country was 64.5 million m3, and fuelwood consumption was 9.4 million m3. With just 74 million m3 of the available 114 million m3 being used in 2013, or 61 per cent, an additional 40 million m3 of over supply was available to the market.

Even though the forest is healthy and growing from an operational and economic perspective, the fact that consumers imported 10 million m3 of roundwood each year points to regional supply deficits, as imports flowing from the Baltics and Russia attest. Logistics are one explanation. Some of these forests are not economically harvestable from a logistics perspective, as individual harvest sizes are small or difficult to log because of swampy terrain. Others are far away from mills, and because of high fuel costs, transporting logs from the forest to the market is not economically feasible. These logistical issues incent forest products companies to import logs from nearby Russia to save on freight costs, and to import inexpensive logs from areas, like the Baltics, with minor pulpwood markets. Logs from these areas are readily available and relatively inexpensive, compensating for higher freight rates.

In this context, an additional 4 million m3 of demand should induce a certain amount of diligence in the industry. This additional capacity will add fiber constraints to the local market regardless of the state of the entire Finnish forest.

The Effect of New Demand on Timber Prices

To support this additional demand, markets in Scandinavia are likely to become more dynamic and complicated, and wood will flow more freely across borders. Because mills will need to source wood from further distances, logistics costs will increase, and they become a larger part of overall costs.

Forest2Market’s experience with similar situations in North and South American markets suggests that logistics costs go up first and then stumpage prices follow. Currently, real stumpage prices have been following a downward trend in Finland as a result of the oversupply, and prices are lower than they are in key competitor countries as a result. The addition of production capacity will bring supply and demand into greater parity, and—at least in some areas—prices should reverse trend. 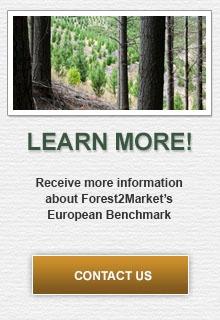 Scandinavian forest products markets are approaching a liminal moment. Facing increased competition globally from markets with lower cost positions and the potential for the higher fiber costs associated with more dynamic markets, producers in Scandinavia will be under greater pressure to understand their markets and manage their cost positions not only in regards to other mills in their region, but to other mills across the globe.

Currently, the delivered price data required to evaluate a mill’s cost position relative to the market and to optimize the supply chain to reduce costs is unavailable in Europe. A credible benchmark, like the ones Forest2Market has developed in North and South American markets, would provide a level of transparency to the market that would be beneficial in the long term to both Scandinavian markets and support the health and sustainability of forests through better utilization.

Global Forest Industry
Effects of the COVID-19 Pandemic on Brazil’s Forest Sector
Some players in the Brazilian forest-based industry are doing well in the face of the economic crisis caused by the...
END_OF_DOCUMENT_TOKEN_TO_BE_REPLACED