Forest industry performance in July and August was recently reported by both the US government and the Institute for Supply Management.

July was a positive month for sectors that produce physical goods. Total industrial production (IP) rose 0.7 percent—the largest advance for the index since November 2014. Manufacturing output also experienced its largest gain (0.5 percent) since July 2015. New orders rose by 1.9 percent in July, led by transportation equipment (+10.5 percent). Ex-transportation, orders were a more modest +0.2 percent, and still 4.7 percent below year-earlier levels (the 21st consecutive month of YoY declines). Business investment spending, although +1.5 percent MoM in July, has contracted on a YoY basis (-7.2 percent in July) during all but two months since December 2014.

The Institute for Supply Management’s (ISM) monthly opinion survey showed that US manufacturing contracted in August. The PMI fell by 3.2 percentage points to 49.4 percent (50 percent is the breakpoint between contraction and expansion). All sub-index values were either unchanged or lower in August than in July.

Meanwhile, the pace of growth in the non-manufacturing sector abruptly decelerated. The NMI tumbled by 4.1 percentage points, to 51.4 percent —its lowest reading since 2010. The only sub-index with a higher August value was slow supplier deliveries.

Wood Products was unchanged; Paper Products and Ag & Forestry contracted while Real Estate and Construction expanded. “Overall, the oil and gas industry remain in [a] ‘wait and watch’ mode,” wrote one Construction respondent. “The price of oil has impacted investment considerably.” 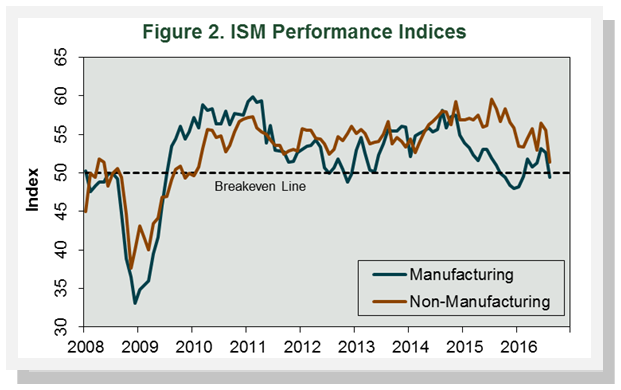 The consumer price index (CPI) was unchanged in July, thanks primarily to a sharp decrease in the gasoline index (-5.5 percent). The all-items index was +0.8 percent YoY. Rents rose by 3.8 percent YoY for a third consecutive month, the fastest pace since 2008; medical care services: +4.1 percent YoY.

The producer price index (PPI) decreased 0.4 percent in July (-0.2 percent YoY), led by declining margins for apparel, jewelry, footwear, and accessories retailing. The not seasonally adjusted indices for forest products were as follows:

US forest industry
CPI & Forest Products Sector PPI Continue to Expand
US forest industry performance in February and March was recently reported by both the US government and the Institute...
END_OF_DOCUMENT_TOKEN_TO_BE_REPLACED