Forest industry performance in November and December was recently reported by both the US government and the Institute for Supply Management.

Countering the weakness in the data discussed in the previous section, the Institute for Supply Management’s (ISM) monthly opinion survey indicated that the pace of expansion in US manufacturing sped up during December. The PMI registered 54.7 percent, an increase of 1.5 percentage points. (50 percent is the breakpoint between contraction and expansion.) The most noteworthy change in the PMI sub-indexes was the jump in input prices. December’s pace of growth in the non-manufacturing sector (NMI) was unchanged at 57.2 percent. Only order backlogs fell below the breakpoint in the NMI survey.

Paper Products and Construction expanded while Ag & Forestry contracted; Wood Products and Real Estate were not mentioned at all. 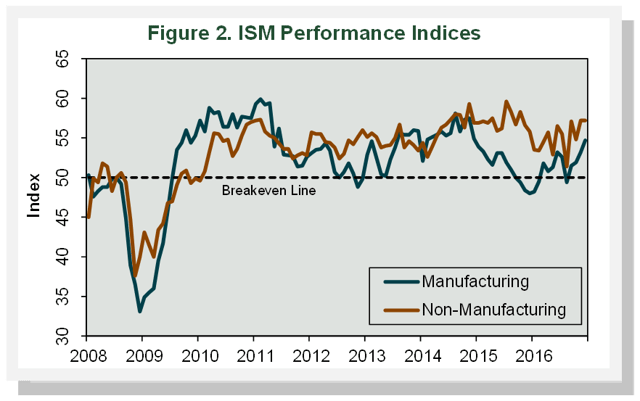 The consumer price index (CPI) rose 0.2 percent in November, once again primarily because of increases in the shelter (0.3 percent) and gasoline (2.7 percent) indexes. The all-items index was also 1.7 percent higher for the 12 months ending November; the YoY all-items increase has been accelerating since July’s reading of +0.8 percent. Rent and medical services were both 3.9 percent higher YoY.

The producer price index (PPI) increased 0.4 percent in November (+1.3 percent YoY, the largest rise since November 2014). Over 80 percent of November’s advance in the final demand index was attributable to a 0.5 percent rise in prices for final demand services—especially costs paid by retailers. The index for final demand goods increased 0.2 percent.

US forest industry
Strategic Planning During Downturns with Precise Market Data
It’s difficult to overstate the uniqueness of the current global health (and economic) crisis we find ourselves in....
END_OF_DOCUMENT_TOKEN_TO_BE_REPLACED