Forest industry performance in January and February was reported by both the US government and the Institute for Supply Management.

Total industrial production (IP) increased 0.9% in January, a greater month-over-month (MoM) rise than expected owing in part to December’s reading being revised lower (from -0.4% to -0.7%). Total IP remained 0.7% below its year-earlier level, however, the third consecutive month of YoY declines. During the past 100 years, the U.S. economy fell into recession 17 out of 19 times when IP contracted for three consecutive months, so January’s IP jump may prove to be too little, too late.

The Institute for Supply Management’s (ISM) monthly opinion survey showed that the contraction in U.S. manufacturing slowed further during February (Figure 2). The PMI increased 1.3 percentage points, to 49.5%. (50% is the breakpoint between contraction and expansion.) Changes to key internal sub-indexes included a pick-up in production, a smaller reduction in employment, slower input price erosion, and contractions in both exports and imports (Table 4). 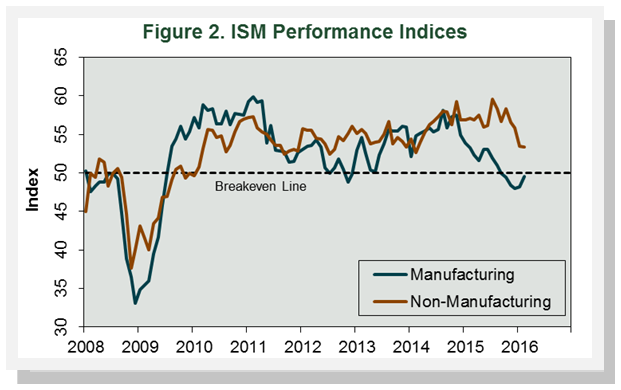 Meanwhile, the pace of growth in the non-manufacturing sector marginally decelerated. The NMI edged down 0.1 percentage point, to 53.4%—the weakest level since February 2014. Changes in the sub-indexes were mixed, although with notable increases in export and import orders.

Wood Products expanded on new orders and production. “[The] market is beginning to trend up with Spring season on its way,” commented one Wood Products respondent. For Paper Products, increases in employment and inventories apparently trumped all other sub-indexes.

The consumer price index (CPI) was unchanged in January as an increase in the index for all items less food and energy offset a decline in the energy index. The CPI rose 1.4% YoY in January, driven primarily by shelter (rent: +3.7%; owner’s equivalent rent: +3.2%) and medical costs (+3.3%).

US forest industry
US Manufacturing, Forest Industry Slam on Brakes in April
US forest industry performance in March and April was recently reported by both the US government and the Institute...
END_OF_DOCUMENT_TOKEN_TO_BE_REPLACED