Forest industry performance in June and July was recently reported by both the US government and the Institute for Supply Management.

Business investment spending has contracted (-4.0 percent in June) on a YoY basis during all but two months since December 2014. Such extended YoY and quarterly decreases have never occurred outside a confirmed recession in post-WWII history.

The Institute for Supply Management’s (ISM) monthly opinion survey showed that US manufacturing's pace of expansion decelerated in July. The PMI decreased by 0.6 percentage point, to 52.6 percent. (50 percent is the breakpoint between contraction and expansion.) Only the production and inventories sub-indexes posted higher July values. The pace of growth in the non-manufacturing sector also decelerated. The NMI dropped by 1.0 percentage point, to 55.5 percent. The only relevant sub-indexes with higher July values were new orders, order backlogs, and exports. Wood Products expanded while Paper Products contracted. 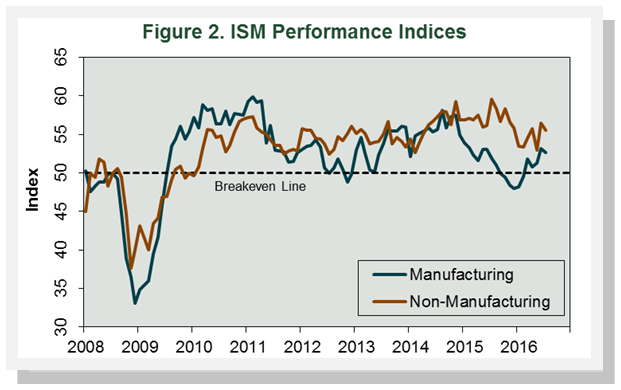 The consumer price index (CPI) increased 0.2 percent in June as, once again, increases in the indexes for energy (+1.3 percent; mainly gasoline: +3.3 percent) and all items less food and energy (+0.2 percent) more than offset a decline in the food index (-0.1 percent). Over the last 12 months, the all-items index rose 1.0 percent (rent: +3.8 percent, which tied the strongest YoY rate of increase since 2008; medical care: +3.8 percent).

The producer price index (PPI) advanced by 0.5 percent in June (+0.3 percent YoY—the largest increase since December 2014), thanks mainly to a 0.4 percent rise in costs for services. Also, a 9.9 percent jump in the gasoline index helped push the goods index up by 0.8 percent. YoY changes in forest products indices are as follows:

US forest industry
Strategic Planning During Downturns with Precise Market Data
It’s difficult to overstate the uniqueness of the current global health (and economic) crisis we find ourselves in....
END_OF_DOCUMENT_TOKEN_TO_BE_REPLACED