Forest industry performance in October and November was recently reported by both the US government and the Institute for Supply Management.

Total industrial production (IP) rose by just under 0.1 percent in October (-0.8 percent YoY, the 14th consecutive month of YoY declines) after decreasing 0.2 percent in September; September IP had originally been estimated at +0.1 percent MoM. Manufacturing output met expectations when increasing by 0.3 percent. As an indication that consumers have yet to recover from the Great Recession, current IP in consumer goods is 35 percent below the level predicted by a trend line fitted to the period between the mid-1980s and the February 2007 peak.

New orders rose by 2.7 percent in October; new orders excluding transportation climbed 0.8 percent (but -0.2 percent YoY—the 23rd month of year-over-year contractions out of the past 24, and the longest non-recessionary downturn in post-WWII history). Business investment spending advanced by 0.2 percent (-4.2 percent YoY). Business investment spending has contracted on a YoY basis during all but two months since January 2015 (inclusive).

The Institute for Supply Management’s (ISM) monthly opinion survey showed that the pace of expansion in US manufacturing accelerated during November. The PMI increased by 1.3 percentage points, to 53.2 percent. (50 percent is the breakpoint between contraction and expansion.) Sub-indexes improved on average—including order backlogs, which shrank more slowly.

The pace of growth in the non-manufacturing sector quickened as well. The NMI rose by 2.4 points, to 57.2 percent. All sub-indexes remained above the breakpoint. Among the individual industries we track, Wood Products and Real Estate contracted; Paper Products, Construction and Ag & Forestry expanded. 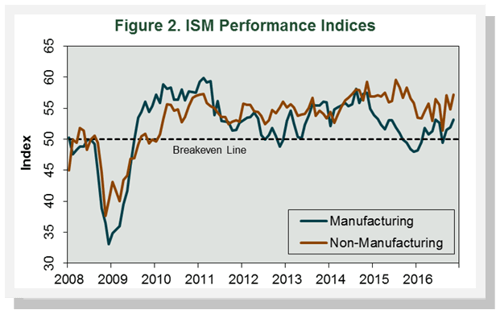 The consumer price index (CPI) increased 0.4 percent in October. As in September, increases in the shelter and gasoline indexes were the main causes of the rise in October’s all-items index. The gasoline index jumped 7.0 percent in October and accounted for more than half of the increase in the all-items index. The shelter index advanced 0.4 percent for the second straight month. The all-items index rose 1.6 percent for the 12 months ending October, its largest YoY increase since October 2014. Rent increased 3.8 percent; medical services: +4.1 percent.

The producer price index (PPI) was unchanged in October (but +0.8 percent YoY, the largest 12-month rise since December 2014). A 0.4 percent increase in the index for final demand goods (primarily attributable to a 9.7 percent jump in gasoline prices) offset a 0.3 percent decline in prices for final demand services.