Forest industry performance in August and September was reported by both the US government and the Institute for Supply Management.

Total industrial production (IP) decreased 0.4% in August (-0.2% expected) after increasing 0.9% (originally +0.6%) in July. Upward revisions to mining and utilities were largely responsible for July’s higher estimate; the revision resulted in total IP retreating in August by the greatest amount in three years. Total IP in August was +0.9% YoY, however.

Manufacturing output fell 0.5% in August primarily because of a large drop (the most since January 2009, and to a four-year low) in motor vehicles and parts that reversed a substantial portion of July’s jump. Wood Products output fell by 0.1% (-1.7% YoY) while Paper rose 0.1% (-1.4% YoY).

Capacity at the all-industries and manufacturing levels moved higher:

The Institute for Supply Management’s (ISM) monthly opinion survey showed that growth of economic activity in the U.S. manufacturing sector nearly stalled in September (Figure 2). The PMI registered 50.2%, a decrease of 0.9 percentage point and the lowest reading since April 2013. (50% is the breakpoint between contraction and expansion.) Except for customer inventories, sub-index values were either lower or unchanged compared to August (Table 3). Wood Products contracted, thanks to erosion among the most important sub-indexes. Paper Products expanded as usual, with only backlogged and new export orders serving as headwinds. 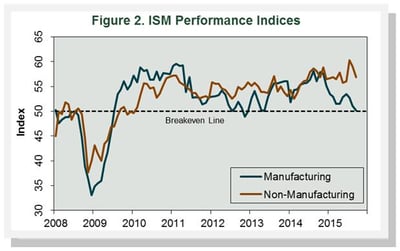 The pace of growth in the non-manufacturing sector tumbled in September. The NMI registered 56.9%, 2.1 percentage points lower than the August reading. A majority of sub-indexes were lower, new orders being the most important. Two of the three service industries we track (Real Estate and Construction) reported expansion. Ag & Forestry was unchanged.

US forest industry
Strategic Planning During Downturns with Precise Market Data
It’s difficult to overstate the uniqueness of the current global health (and economic) crisis we find ourselves in....
END_OF_DOCUMENT_TOKEN_TO_BE_REPLACED