With wildfire season just a few weeks away in the Pacific Northwest (PNW), the amount of standing dead timber in western national forests is a real concern for both residents and the federal and state agencies that are tasked with fire suppression efforts and mitigating fire damage.

Per a 2017 Resources Planning Act (RPA) Assessment update to the Forest Resources of the United States technical document, the situation in public, government-managed forests in the western US is dire. Based on new data published in this RPA, the U.S. Forest Service (USFS) says that forest mortality exceeded net growth on America’s national forest timberlands in 2016. The data come from the agency’s annual Forest Inventory Analysis (FIA) Program and include trees at least 5” in diameter.

Forest growth was 48 percent of mortality, while timber harvests were a mere 11 percent of what is dying annually—and this trend is on the rise. The agency estimates that 6.3 billion dead trees were standing in 11 Western states in 2015, up from 5.8 billion in 2010. Roughly 20 percent of those trees were killed by bark beetles, although other causes of mortality include drought and disease. 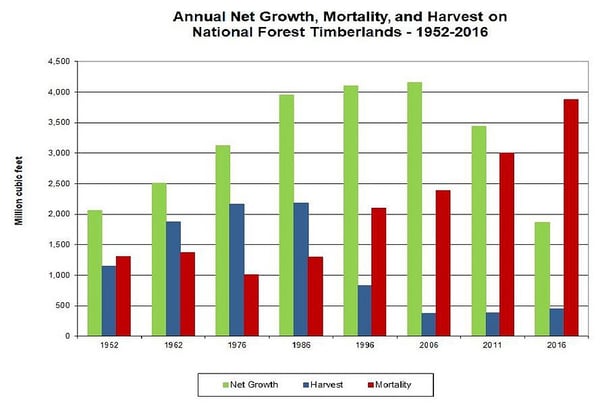 Healthy Forests Healthy Communities asks the most pertinent question: “What do these data mean? Far more trees are dying due to neglect – catastrophic wildfire, insects, and disease – than are being harvested and utilized as wood products.”

The obvious follow-up question is this: What are the federal and state governments—who are responsible for these millions of acres of forestland—doing to remedy the situation?

Healthy Forests notes that, “With today’s technology, it’s possible to harvest timber in a sustainable manner that protects the many benefits we’ve come to expect from our forests. Sustainable management of our forests includes replanting after harvests, selective harvesting, protection of water sources and wildlife habitat, and wildfire prevention.”

Healthy Forests adds that a lack of thinning or harvesting in dense, overcrowded timber stands can threaten both forest and wildlife habitat by making stands vulnerable to unusually hot and destructive fires. “For example, from 1968 to 1985, fires burned an average of 3,700 acres per year across Oregon. After 1985, through 2011, the average fire size increased to 46,000 acres per year.  Colorado, California and Arizona forests have experienced record impacts from forest fires.” 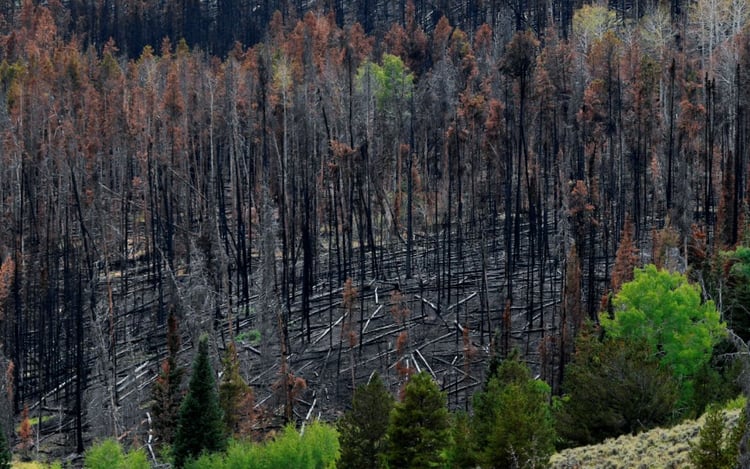 Western forest mortality has surged in recent decades—so much so that California’s forests have actually become net carbon emitters. (Climate change activists are conspicuously silent on this topic.) Greenhouse gas (GHG) emissions across the California economy were down by 1.5 million metric tons in 2015, the most recent year for which emissions data are available. However, per an estimate from the USFS, a single Fresno County fire produced 6.8 million metric tons of GHG, and other fires on federally-managed land within California emitted 16 million metric tons in that same year.

The enormous (and growing) scale of these fires and their dangerous emissions seriously inhibit the ability of Western states to make any meaningful progress towards meeting climate change goals and cutting GHG impacts. The frustrating reality for the millions of people affected by these fires is that there are proven solutions that can mitigate fire risk and damage.

The science has proven time and time again that active forest management can ease overcrowding, promote growth and help make our forests more resilient to potential destructive elements such as wildfire, insects and disease.

Healthy Forests sums it up succinctly: “The bottom line is that our federal forests are not being actively managed, whether through logging, thinning and prescribed fire. As a result, our forests are dying at an astonishing rate. Forest management is a choice. We can continue to allow our forests to die and succumb to catastrophic wildfire, insects, and disease. Or, we can manage our forests to promote forest health, resiliency and carbon sequestration, while producing renewable and environmentally-friendly products that meet our daily needs and support thousands of American jobs.”

Forest Management
We Need to Tell Our Story – At Every Opportunity
The following was recently published by our friends at Forest Resources Association, and was authored by Eric Kingsley,
END_OF_DOCUMENT_TOKEN_TO_BE_REPLACED 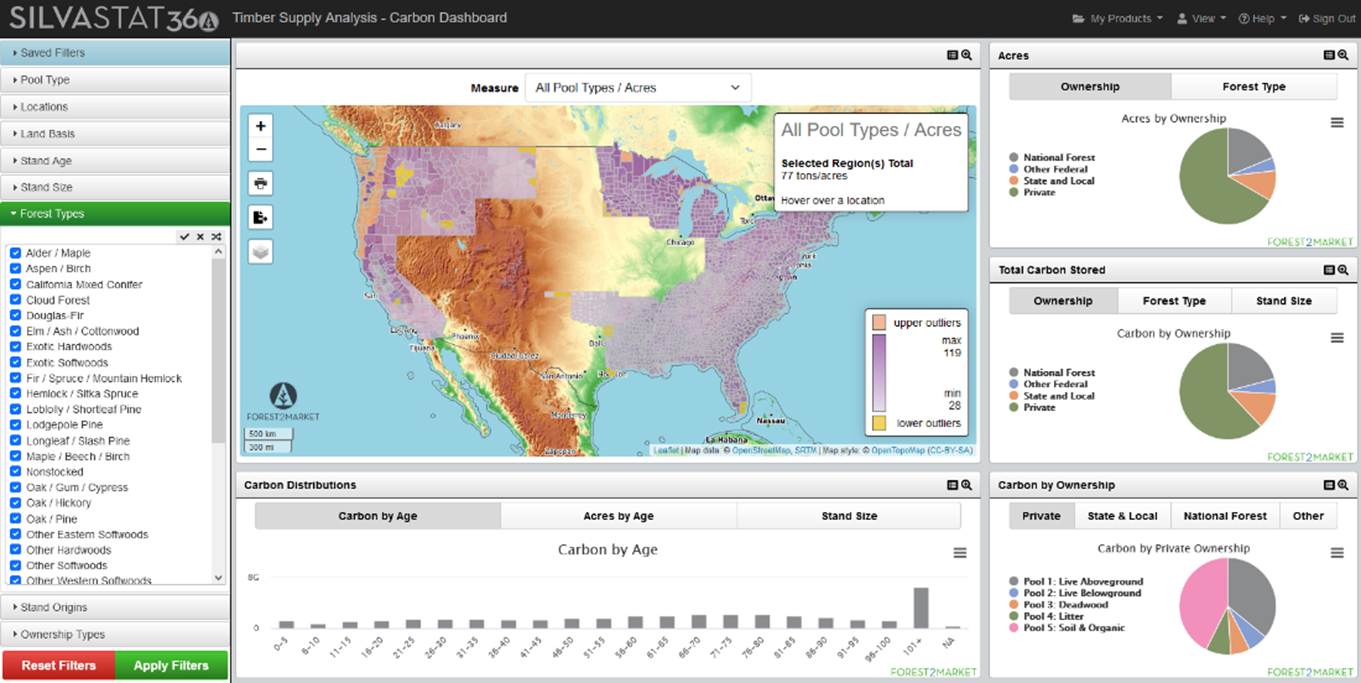 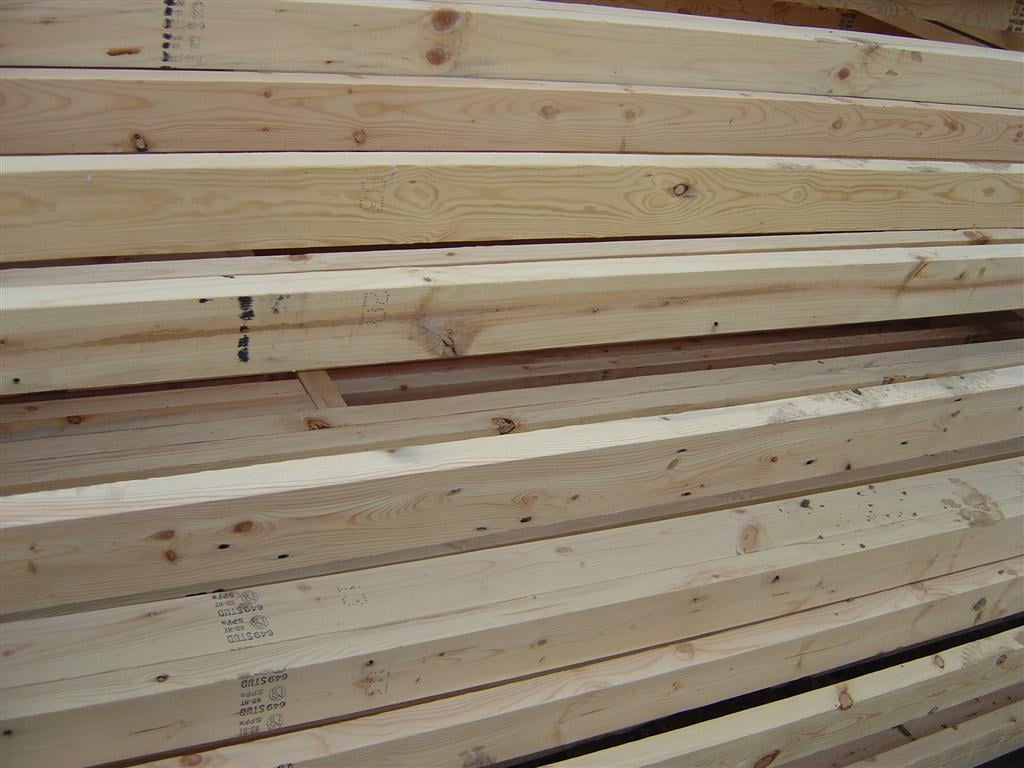