It’s been a challenging year for the forest products industry in the Pacific Northwest (PNW). From record wildfires to mill consolidations, the sector experienced an enormous amount of change in this part of the world in 2015. As we approach the end of the year, it’s a good time to reflect on industry happenings and trends in 2015 as well as the outlook for the coming year. So, what have we learned and more importantly, where are we headed?

As global markets have continued to disappoint in 2015, American manufacturers and exporters remain disadvantaged due to the continued strength of the dollar; as of this writing, the American dollar is worth $1.34 Canadian dollars and 6.37 Chinese yuan. To make matters more challenging, analysts generally agree that the near-term outlook for 2016 is volatile at best. Credit Suisse’s global head of research Ric Deverell, recently wrote that, "The coming year is likely to prove to be a watershed in global economic history," due to the combined effects of an inevitable FED rate hike while foreign institutions and governments continue to make changes in an effort to ease conditions for their own economies. Deverell also highlights a "deepening slump in Chinese investment,” as well as a "drift higher in US core inflation that triggers higher interest rates and tighter financial conditions." None of this bodes well for a struggling economy; as a rule, election years are economically inactive as uncertainty looms, and some of the larger geopolitical events that are currently playing out will further intensify the uncertainty into 2016.

Exports from the PNW have remained fairly steady through 2015 as exporters continue to accept lower margins to maintain their market positions and port operations. China’s growth has slowed, but the country continues to source logs from both the southern hemisphere and the PNW and British Columbia. The recent move by China to bolster its economic growth by devaluing its currency will not help the situation in the PNW, as the trade deficit will only widen and the wait for overseas demand will become longer. How long PNW exporters will remain in a holding pattern at low margins is anyone’s guess but, as noted above, a deepening slump in Chinese investment could result in minimal growth or stagnation in 2016. If this happens, exporters will likely be in a similar situation this time next year.

As I reported earlier in the summer, a number of mill consolidations have changed the nature of the industry in the PNW; there have been over 15 such events this year alone. Some well-established companies have changed hands and there have been layoffs and terminal closures.  The recent announcement of the Weyerhaeuser acquisition of Plum Creek will close in the first half of 2016, furthering the consolidation dynamic throughout the timber industry. This event will have wide ranging effects, particularly in the Inland region where Weyerhaeuser has not had a significant presence in either the timberland or the conversion sectors. The good news is that this continued period of transition will result in stronger market opportunities in the future as the industry matures to be more competitive in the long-term.

With the SLA expiring last month and no real negotiations by either party taking place, the future of lumber prices within the US remains uncertain. As we noted earlier this fall, the SLA contains a clause that prevents both US and Canadian manufacturers from taking unilateral action for a one-year period. In the interim, Canadian producers still have an export advantage over US producers due to the currency conversions noted above, and US mills continue to announce curtailments as the market softens going in to the year-end holiday season; what will happen in the coming months is anyone’s guess at this point.

Analysts tend to agree that 2016 will be very similar to 2015 when it comes to housing starts, which is to say it will be unimpressive. Our own forecast actually calls for housing to dip next year to less than one millions starts, which is below many estimates. As mentioned above, the election year and continued sense of uncertainty is likely to impact housing negatively, as builders and bankers will seek to maintain the relatively tight supply that we witnessed in 2015. 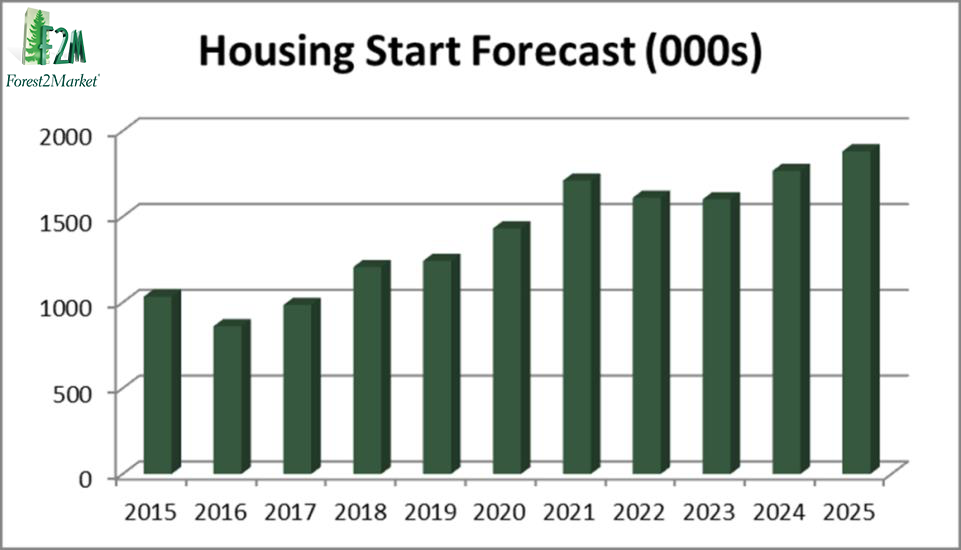 A reduction in domestic and export market volume (which has caused log prices to drop considerably) and the responsive decrease in harvest volumes have converged to create difficult conditions for regional timber companies. The recent Weyerhaeuser/Plum Creek merger will establish one of the world’s largest forest products companies, which is representative of the trend I predicted earlier in the year as TIMOs and REITs attempt to realize budgetary goals with land sales. Look for more of this activity in 2016, though not on the scale of the Weyerhaeuser merger.

Nine million acres of US forestland burned during the wildfire season of 2015. Suppression funding from the US Forest Service totaled over $1 billion and many mills throughout the PNW dealt with short-line rail closures and other infrastructure challenges in the wake of the fire devastation. With well over a billion board feet of burnt timber requiring immediate salvage on private and agency timberlands, regional sawmills will be utilizing this damaged resource well in to 2016 and possibly beyond.  While lumber quality should be relatively stable for some time, the pulp and paper industry is likely to opt for charred residual sawmill chips, which will mean the displacement of clean fiber. As the “non-fire” season advances, all stakeholders must continue the collaborative effort of producing tangible, fiscally-prudent results allowing for more proactive forest management—rather than reactive suppression policies—on our federal forestlands throughout the Western states.

Log Markets
New Markets for Wood Products Help Preserve Forests for Future Generations
There is an ongoing disconnect that tends to resurface in the debate surrounding the use of woody biomass to create the...
END_OF_DOCUMENT_TOKEN_TO_BE_REPLACED

Timber Prices
US South Sawlog Supply is Likely to Tighten But Surplus of Small Logs and Residues Will Create Opportunities
The US South’s softwood industry has enormous potential for a variety of reasons. The region has a significant forest...
END_OF_DOCUMENT_TOKEN_TO_BE_REPLACED