The picture on the health of manufacturing is muddled. Manufacturing output had a strong 1Q (+10.4 percent, annualized) despite appearing to run out of gas in March (-0.2 percent relative to February). Forest products industry performance was also mixed in March: Wood Products industrial production rose by 0.3 percent, while Paper output fell by 0.5 percent (see last month's industry performance report).

In April, several regional surveys of business activity showed slower growth (e.g., Chicago,23 Philadelphia1 and New York) but the Institute for Supply Management’s manufacturing PMI strengthened (to 54.8 percent, from 53.4 in March – where 50 percent is the break point between contraction and expansion).

Bradley Holcomb, chair of ISM’s Manufacturing Business Survey Committee, wrapped up his comments on the April report by saying, “Sixteen of the 18 industries reflected overall growth in April, and the New Orders, Production and Employment Indexes all increased, indicating growth at faster rates than in March.... Comments from the panel generally indicate stable to strong demand, with some concerns cited over increasing oil prices and European stability.” Table 1 indicates Wood and Paper Products switched roles in April: Paper Products was among the 16 industries reporting growth while Wood Products was one of the two that contracted. 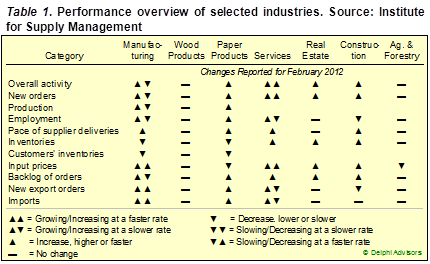 ISM’s reading of performance in the non-manufacturing sector was not as encouraging; the non-manufacturing sector grew at a slower pace in April, reflected by a 2.5 percentage point drop (to 53.5 percent) in the NMI. “Respondents’ comments affirm the slowing rate of growth,” concluded Anthony Nieves, chair of ISM’s Non-Manufacturing Business Survey Committee. “In addition, they remain concerned about rising fuel costs and the impact on shipping, transportation and petroleum-based product costs.” Both Real Estate and Construction expanded, while Ag & Forestry contracted. Input prices rose at the same pace for the manufacturing sector in April as they had in March, but rose more slowly for the service sector.

The view forward for manufacturing is as murky as the present. Overall, new orders for manufactured goods declined $7.1 billion (1.5 percent) in March; excluding the ever-volatile transportation sector, however, new orders increased slightly – primarily because of a 0.5 percent rise in non-durable goods orders (Figure 1). As mentioned above, ISM’s new-orders indices rose in April, although the pace of growth slowed for the service sector. 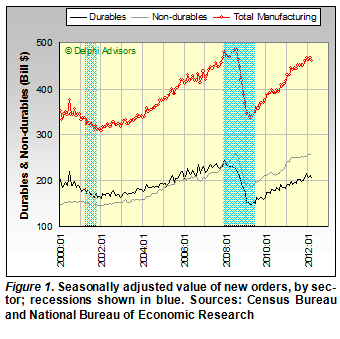 The behavior of new orders during the past two years could lead one to conclude the economy has nearly recovered its pre-recessionary vigor; after all, in nominal terms new orders are nearly 40 percent above their March 2009 trough and within 4 percent of their June 2008 peak. Taking price inflation into account provides a somewhat different perspective, however. True, real new orders are 20 percent above the recessionary bottom, but remain 15 percent below the previous top. More importantly, real new orders are 8.6 percent below January 2000’s level. Hardly the stuff of a robust economy.

US forest industry
US Manufacturing, Forest Industry Slam on Brakes in April
US forest industry performance in March and April was recently reported by both the US government and the Institute...
END_OF_DOCUMENT_TOKEN_TO_BE_REPLACED

US forest industry
Strategic Planning During Downturns with Precise Market Data
It’s difficult to overstate the uniqueness of the current global health (and economic) crisis we find ourselves in....
END_OF_DOCUMENT_TOKEN_TO_BE_REPLACED