After edging up by 0.1% in October (revised from -0.1%), the seasonally adjusted industrial production (IP) index gained another 1.1% in November. The bulk of November’s gain is attributable to utility output, thanks to colder temperatures. Performance of major sub-groups was as follows:

According to the Institute for Supply Management (ISM), expansion of economic activity in the U.S. manufacturing sector slowed slightly in December (Figure 2). The PMI registered 57.0 percent, a decrease of 0.3 percent from November's reading (50 percent is the breakpoint between contraction and expansion). “Comments from the [respondent] panel generally reflect a solid final month of the year,” said Bradley Holcomb, chair of ISM’s Manufacturing Business Survey Committee, “capping off the 2H2013, which was characterized by continuous growth and momentum in manufacturing.” 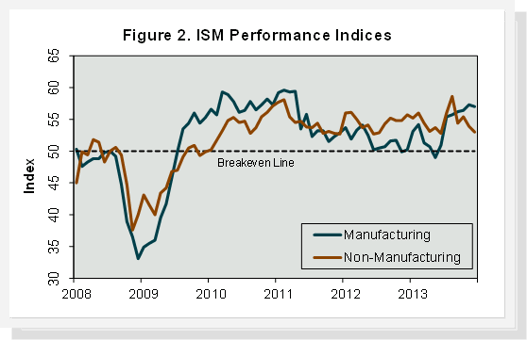 December’s general manufacturing sub-indices were mixed (Table 3): New orders, employment, deliveries and input prices all expanded relative to November. Production, order backlogs, and exports -- while still expansionary -- slowed from the prior month’s pace. Most encouraging (if it translates into increased 4Q2013 consumption), inventories contracted; this suggests the huge 3Q2013 inventory run-up is perhaps being drawn down by increased demand.

Growth in the service sector, which accounts for roughly two-thirds of the U.S. economy, slowed in December as well. The NMI registered 53.0 percent, 0.9 percentage point lower than in November -- and the lowest point since June. Employment, the pace of supplier deliveries and inventories rose at a faster pace. All other sub-indices either expanded more slowly or contracted in November. The most notable development was the tumble in New Orders (down from 56.4 to 49.4) -- the first contraction in the New Orders index since July 2009. “Despite the substantial decrease in the New Orders Index.” said Anthony Nieves, chair of ISM’s Non-Manufacturing Business Survey Committee, “respondents’ comments predominately reflect that business conditions are stable.”

Among the individual service industries we track, only Construction expanded (thanks to new orders and new export orders). Real Estate retreated under falling new orders and inventories. Ag & Forestry was unchanged.

Commodities up in price included corrugated packaging and wood. Some respondents indicated paying more for gasoline and diesel, while others paid less.

US forest industry
US Manufacturing, Forest Industry Slam on Brakes in April
US forest industry performance in March and April was recently reported by both the US government and the Institute...
END_OF_DOCUMENT_TOKEN_TO_BE_REPLACED