US forest industry
Author: Forest2Market
This post is excerpted from Forest2Market's monthly Economic Outlook, a 24-month forecast of macroeconomic indicators.

Bucking expectations of a 0.2% increase, industrial production (IP) instead dropped by 0.3% in January; that retreat erased December’s gain. The report showed: 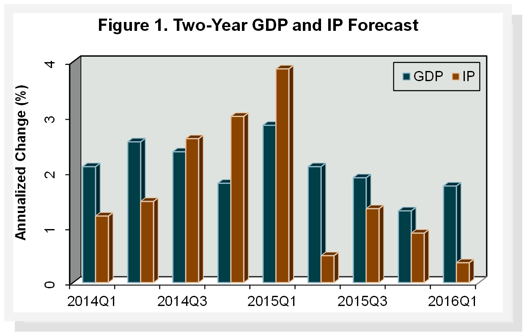 According to the Institute for Supply Management (ISM), expansion of economic activity in the U.S. manufacturing sector inched up in February(Figure 2). The PMI registered 53.2%, an increase of 1.9 percentage points (50% is the breakpoint between contraction and expansion). “As in January, several comments from the [respondent] panel mention adverse weather conditions as a factor impacting their businesses in February,” said Bradley Holcomb, chair of ISM’s Manufacturing Business Survey Committee. 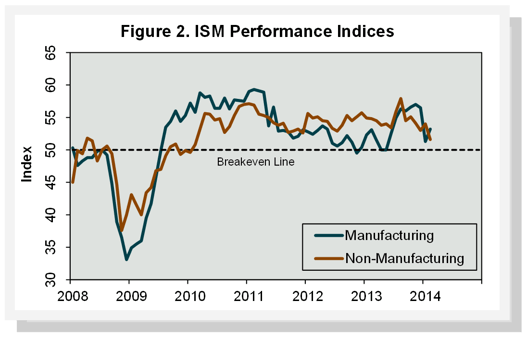 As for individual industries, Wood Products expanded again in February, thanks to additional employment and new and backlogged orders. Paper Products also grew, with gains in six of the 10 sub-indices.

Whereas manufacturing growth nearly stalled in January, the performance of non-manufacturing industries weakened in February. The NMI registered 51.6%, a 2.4 percentage point drop -- the slowest reading since February 2010. Except for supplier deliveries and new and backlogged orders, service sub-indices either rose more slowly or contracted more quickly than in January. “The majority of respondents’ comments indicate a slowing in the rate of growth,” said Anthony Nieves, chair of ISM’s Non-Manufacturing Business Survey Committee. “Some of the respondents attribute this to weather conditions. Overall respondents’ comments reflect cautiousness regarding business conditions and the economy.”

Among the individual service industries we track, only Ag & Forestry expanded. Construction contracted despite increases in employment and order backlogs. Real Estate also shrank as dips in new orders and employment more than offset a rise in order backlogs.

US forest industry
Strategic Planning During Downturns with Precise Market Data
It’s difficult to overstate the uniqueness of the current global health (and economic) crisis we find ourselves in....
END_OF_DOCUMENT_TOKEN_TO_BE_REPLACED