The Performance Manufacturing Index (PMI) registered 51.3%, down 2.9% from February’s reading of 54.2% (Figure 2). Performance was supported by the growth of new orders, production, employment, supplier deliveries, prices, backlog of orders, exports, and imports. Inventories and customers’ inventories slowed this month. Among the manufacturing industries, both the wood and paper products industries reported growth in March and ranked first and fifth, respectively. The wood products industry expanded based on strong performance in new orders, production, employment, inventories, prices, exports and imports. Expansion in the paper products industry was based on stronger performance in new orders, production, supplier deliveries, inventories, prices, and exports. The wood market continued to be strong, even exceeding production plans. 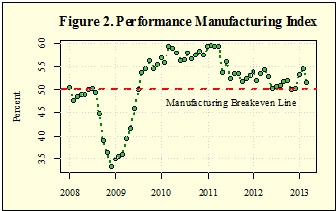 The Non-Manufacturing Index (NMI) grew for its 39th consecutive month at 54.4% in March (Figure 3). That was 1.6% lower than the 56% reading in February, indicating a slower growth rate. Among the indices, new orders, employment, inventories, prices, backlog of orders, exports, and imports grew. Of the 13 non-manufacturing industries, the Construction and Real Estate industries ranked first and eleventh, while the Ag & Forestry industries slowed down in March. 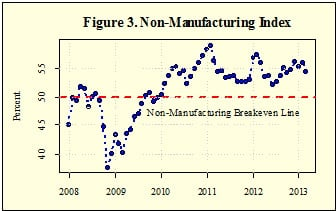