Industrial production at the total manufacturing level rose by 0.3 percent in February; Wood Products followed suit with a 0.1 percent increase, while Paper jumped by 0.7 percent.27 Those figures are likely to hold in March as well, since the Institute for Supply Management’s (ISM) 1.0 percentage point rise (to 53.4 percent) in PMI showed the pace of manufacturing growth sped up slightly in March. Bradley Holcomb, chair of ISM’s Manufacturing Business Survey Committee, observed that, “Of the 18 industries included in the survey, 15 are experiencing overall growth. Comments from the panel remain positive, with several respondents citing increased sales and demand for the next few months.” Both Wood Products and Paper Products showed improved performance in March (Table 1).

The non-manufacturing sector grew at a slower pace in March, reflected by a 1.3 percentage point drop (to 56.0 percent) in the non-manufacturing index (now known simply as the “NMI”). “Respondents’ comments remain mostly optimistic about business conditions. They indicate that increased discretionary spending reflects the increased confidence level of businesses and consumers,” concluded Anthony Nieves, chair of ISM’s Non-Manufacturing Business Survey Committee. However, “there is continued concern about cost pressures and the instability of fuel prices.” Table 1 shows that performance improved for two forestry-related service industries: Real Estate and Construction.

It also shows that input prices rose more slowly for both the manufacturing and service sectors in March. 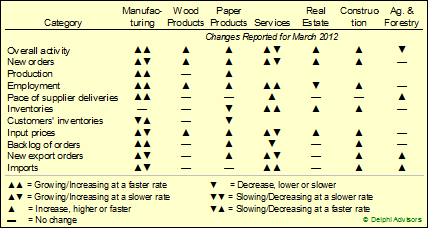 While the trajectory for forestry-related industries continued to improve in March, the news isn't all good. If we look at all industry sectors, the behavior of new orders during the past two years could lead one to conclude the economy has nearly recovered its pre-recessionary vigor; after all, in nominal terms new orders are nearly 40 percent above their March 2009 trough and within 4 percent of their June 2008 peak. Taking price inflation into account provides a somewhat different perspective, however. True, real new orders are 22 percent above the recessionary bottom, but remain 14 percent below the previous top. More importantly, real new orders are 7 percent below January 2000’s level.

US forest industry
US Manufacturing, Forest Industry Slam on Brakes in April
US forest industry performance in March and April was recently reported by both the US government and the Institute...
END_OF_DOCUMENT_TOKEN_TO_BE_REPLACED