Forestry-related industry performance was mixed in February/March—not unlike the January data—in both the manufacturing and non-manufacturing sectors.

The Institute for Supply Management’s (ISM) monthly opinion survey, more a reflection of current attitudes than “hard” data, showed that growth of economic activity in the U.S. manufacturing sector slowed again in March. The PMI fell 1.4 percentage points, to 51.5% (Figure 2)—its lowest reading since May 2013. (50% is the breakpoint between contraction and expansion.) The key new-orders sub-index slipped again but remained in expansion (Table 3). 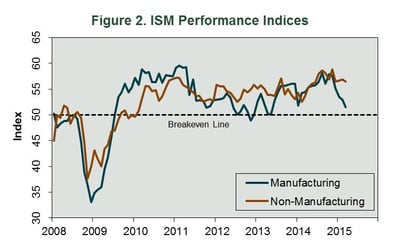 Wood Products expanded in March thanks to new and backlogged orders. Paper Products also expanded, with support among new orders, production and employment. "March business is improving over Jan-Feb," wrote one Paper Products respondent; "thawing out of this crazy winter."

The pace of growth in the non-manufacturing sector edged lower in March. The NMI registered 56.5% (-0.4 percentage point). The business activity sub-index declined while new orders marginally improved—both remaining in moderate expansion. Also, exports and imports both jumped. All three service industries we track reported expansion in March. The new orders sub-index was the most consistent source of strength.

The tenor of ISM's and Markit's surveys diverged markedly in March. Whereas ISM's PMI and NMI both reflected decelerating growth, Markit's U.S. Manufacturing and Services PMIs both showed "sharp" improvements.

US forest industry
CPI & Forest Products Sector PPI Continue to Expand
US forest industry performance in February and March was recently reported by both the US government and the Institute...
END_OF_DOCUMENT_TOKEN_TO_BE_REPLACED