Industrial production (IP) decreased 0.6% in April 2014 after having risen about 1% in both February and March. Total IP in April was 3.5% above its level of a year earlier. Other details from the report showed: 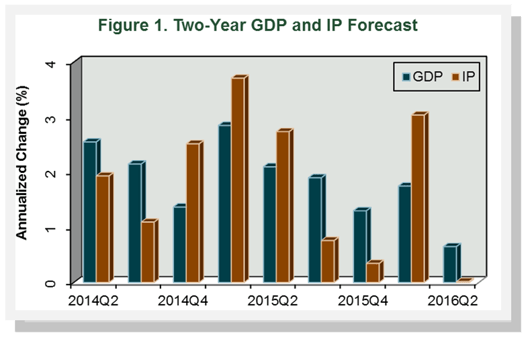 Capacity at the all-industries and manufacturing levels both moved higher by 0.2% in April. Wood Products appears to have definitely turned a corner; capacity increased by 0.3% again in April—the tenth month of advances. Paper, on the other hand, contracted by 0.1% to another new low.

F2M forecasts that 2Q2014 IP will increase relative to 1Q2014 by an annualized rate of 1.9% (Figure 1, previous page). IP growth will subsequently fluctuate between 0.0% and 3.7% through the remainder of the forecast, averaging 1.8% overall.

Setting aside April’s IP drop, it is unclear whether February and March’s improvements—in the midst of winter weather being blamed for the economy’s contraction—is the start of a long awaited trend. There are signals firms may finally be increasing capital spending, which in turn could translate into greater capacity and production.

With capacity utilization near pre-recession levels, capital-project returns are beginning to look more compelling. Low interest rates typically would entice firms to expand through either acquisitions or mergers; however, relatively high stock market prices may persuade firms to “build” rather than “buy.” Should this nascent capital spending gain momentum, the main risk is whether sufficient demand will materialize to justify expanded production. Favorable demographics aside, the key 20- to 29-year-old age cohort needs to have enough jobs and income to create demand for these products. 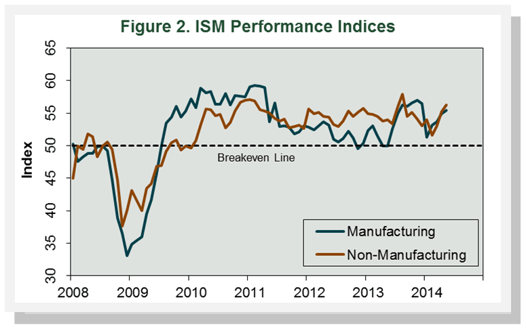 The Institute for Supply Management’s (ISM) monthly opinion survey showed that expansion of economic activity in the U.S. manufacturing sector quickened again in May (Figure 2). The PMI registered 55.4%, an increase of 0.5 percentage point from April (50% is the breakpoint between contraction and expansion). Jumps in the production and prices-paid sub-indices were the main sources of support for the expansion (Table 3).

Wood Products and Paper Products expanded in May, thanks to gains in production and both new and export orders. Paper Products also exhibited expansion in the inventories and backlogged-order sub-indices.

The non-manufacturing sector, which accounts for 80% of the economy and 90% of employment, also picked up the pace of expansion in May. The NMI registered 56.3%, a gain of 1.1 percentage points. Two sub-indexes in the NMI—the Business Activity Index and the New Orders Index—have good correlations to overall economic activity; both grew faster in May.

All three of the individual service industries we track expanded in May; moreover, all of their respective sub-indices were either unchanged or showed growth.

US forest industry
Strategic Planning During Downturns with Precise Market Data
It’s difficult to overstate the uniqueness of the current global health (and economic) crisis we find ourselves in....
END_OF_DOCUMENT_TOKEN_TO_BE_REPLACED