US forest industry
Author: Forest2Market
More manufacturing businesses surveyed by the Institute for Supply Management (ISM) indicated their activity expanded more in September than during any month since June 2011. The PMI rose to 56.2% (Figure 2), an increase of 0.5 percentage point from August's reading of 55.7% (50% is the breakpoint between contraction and expansion). Expectations were for a drop to 55.0%. "Comments from the panel are generally positive and optimistic about increasing demand and improving business conditions," said Bradley Holcomb, chair of ISM's Manufacturing Business Survey Committee. 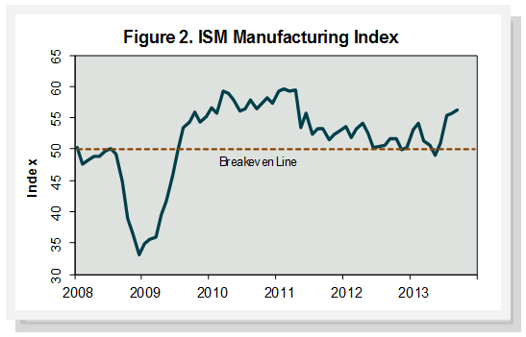 Despite the upbeat headline number, several sub-indices were not quite as positive as in August. New, export and import orders all expanded more slowly, for example (Table 3). Also, a much larger number of respondents indicated they paid higher input prices in September. Employment expanded noticeably, however, which is what contributed most to the PMI uptick. 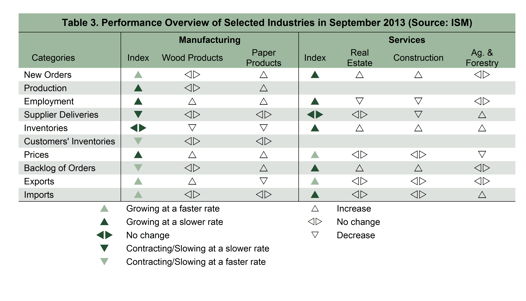 Far fewer service-sector survey respondents reported growth in September. The NMI registered 54.4%, 4.2 percentage points lower than August's 58.6%. The index dropped to its lowest point since May, constituting the biggest one-month decline since March 2009 (Figure 3). "The majority of the respondents' comments continue to be positive," said Anthony Nieves, chair of ISM's Non-Manufacturing Business Survey Committee. "However, there is an increase in the degree of uncertainty regarding the future business climate and the direction of the economy." 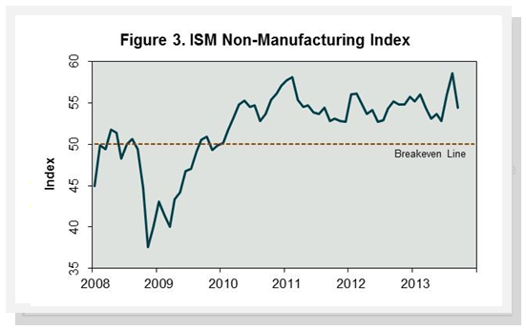 Overall activity expanded among the service industries we track. The main negatives were shrinking employment and higher inventories. One Construction respondent warned that "Overall business conditions are slowing -- small manpower decrease of 5%."

Commodities used by either the manufacturing or non-manufacturing industries we track and that were up in price included diesel fuel, caustic soda and corrugated boxes. Gasoline and lumber (pine, plywood products and treated) were down in price.

US forest industry
US Manufacturing, Forest Industry Slam on Brakes in April
US forest industry performance in March and April was recently reported by both the US government and the Institute...
END_OF_DOCUMENT_TOKEN_TO_BE_REPLACED

US forest industry
Strategic Planning During Downturns with Precise Market Data
It’s difficult to overstate the uniqueness of the current global health (and economic) crisis we find ourselves in....
END_OF_DOCUMENT_TOKEN_TO_BE_REPLACED