Although industrial production (IP) continues to be a bright spot in the U.S. economy, its luster dimmed slightly in August when total output ticked down by 0.1%. Other details from the report showed:

Manufacturing capacity expanded by 0.2% again in August. Wood Products capacity extended its upward trend with another 0.4% rise. Paper, on the other hand, contracted by 0.2% yet again—to its lowest point since January 1986. 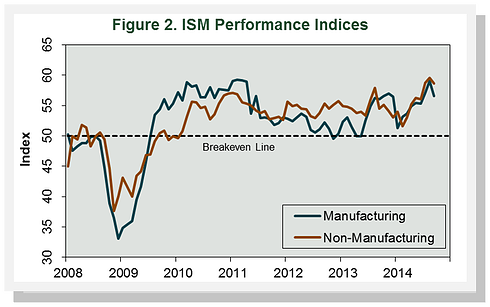 The Institute for Supply Management’s (ISM) monthly opinion survey showed that expansion of economic activity in the U.S. manufacturing sector stumbled in September. The PMI fell back to 56.6% (Figure 2), a decrease of 2.4 percentage points (50% is the breakpoint between contraction and expansion). All of the sub-indices weakened except for Production and Input Prices (Table 3).

Contrary to overall manufacturing, there was fairly widespread support among the sub-indices for the expansion in both Wood and Paper Products during September. One Paper Products respondent observed, “Outlook is very good; demand seems to be growing.”

The pace of growth in the non-manufacturing sector—which accounts for 80% of the economy and 90% of employment—also retreated in September. The NMI declined by 1.0 percentage point, to 58.6%; the drop appears to have been primarily concentrated in the New Orders and Orders Backlog sub-indices.

Two of the three service industries we track reported expansion in September, although only Construction had meaningful support among the sub-indices. “In the building industry there continues to be a lot of remodeling and smaller additions with replacement facilities and new buildings lagging,” wrote one Construction respondent. “Many companies would like to build new, but are still concerned about making the large investment at this time.”

US forest industry
US Labor Market Wraps Up 2019 With a Bang
Every month, Forest2Market publishes updated forecasting products designed specifically for participants in the...
END_OF_DOCUMENT_TOKEN_TO_BE_REPLACED