Germany is a manufacturing and technological powerhouse known for its precision manufacturing technology. The country played a vital role in developing pulp and paper technology at the birth of the industry. This role has continued into the 21st century as Germany is home to many companies supplying tissue production and converting technologies all over the world.

Germany has Europe’s largest economy and ranks fifth in the world, along with being the second-most populous nation (after Russia). The German population trend is displayed in Figure 1 and shows (line) about 81 million people in 2007, dropping slightly to 80.4 million in 2011 before climbing to about 83 million in 2020. The World Factbook shows an estimated population growth of -0.215% in 2021. This is probably difficult to estimate as the Covid-19 pandemic has slowed birth rates and immigration in many countries. Figure 1 also shows the Real GDP/capita trend (2010 base) (bar) with general slow growth up to 2020 as the pandemic struck. Initial indicators show an uptick in activity in 2021. 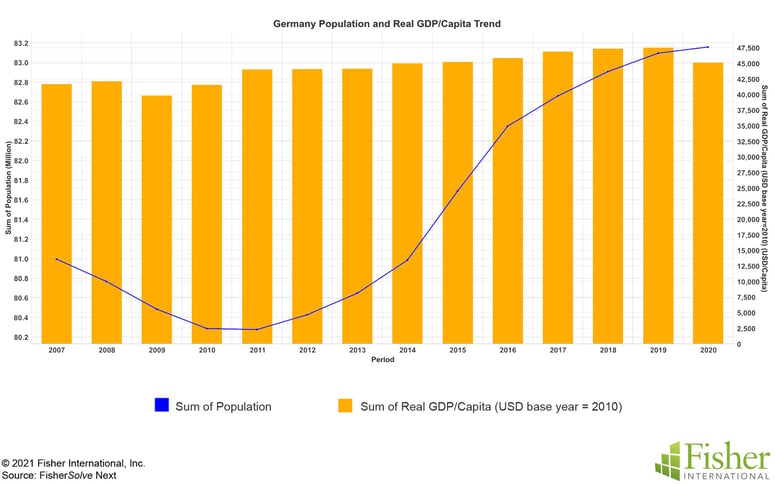 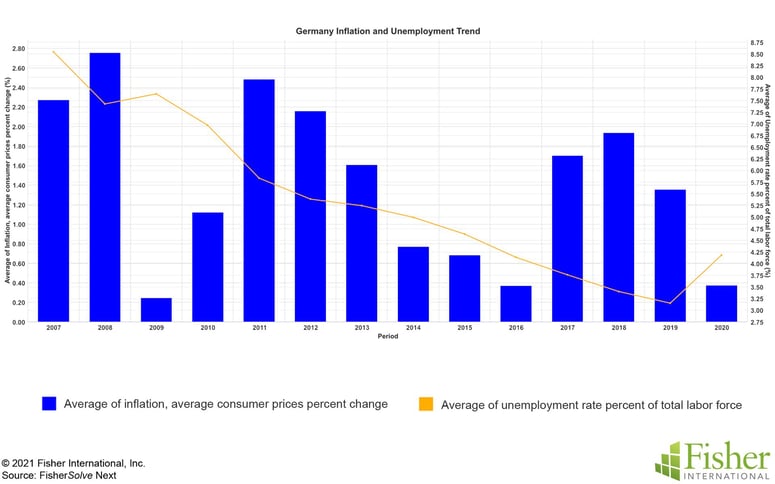 Germany is running about 235.6 active Covid-19 cases per 1 million population as of mid-July 2021. This compares well against most of the region, as shown in the heat map in Figure 3. The new waves of Delta and possibly Lambda variants moving through the world’s populations make it impossible to predict potential demand or supply effects through the end of 2021 as the unvaccinated have increased risk and vaccinated see mild or asymptomatic illnesses. 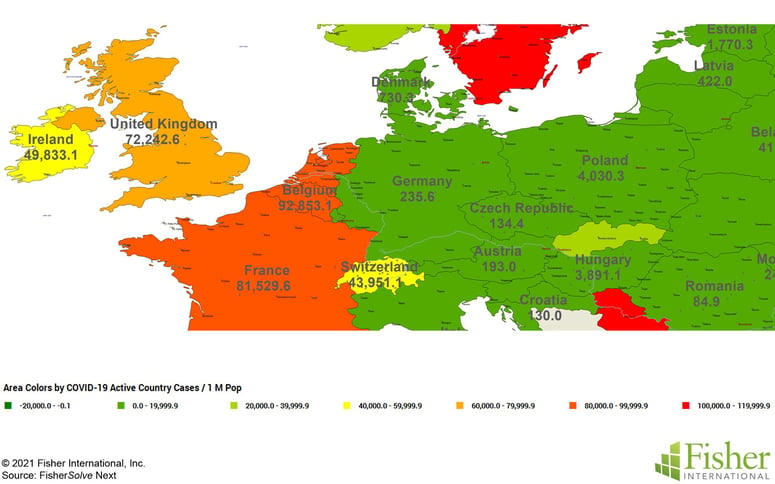 Germany has been careful with tissue machine expansions through the study period of 2007 to 2024 (announced). Figure 4 shows that there have been two new machines installed and two removed, with no further changes expected through 2024. These new machines are expected to be larger than the machines removed for a net capacity increase. 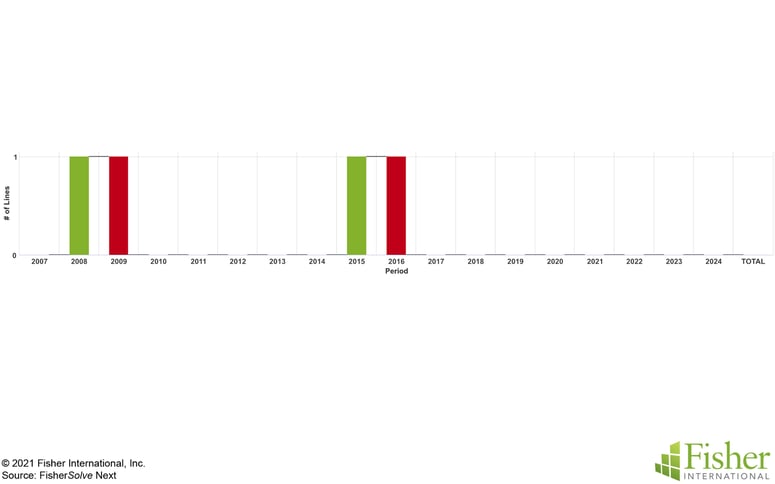 Germany’s tissue business is active in trade, with imports slightly exceeding exports over the past 13 years. Figure 5 shows the imports trend and top eight producing countries. Most of this trade is centered on neighboring producing countries of Austria, France, Italy, Netherlands, Poland, Slovakia, Switzerland, and Sweden. The top producers and the export list are used to develop the Tissue Making comparison set used in the later sections of this report. 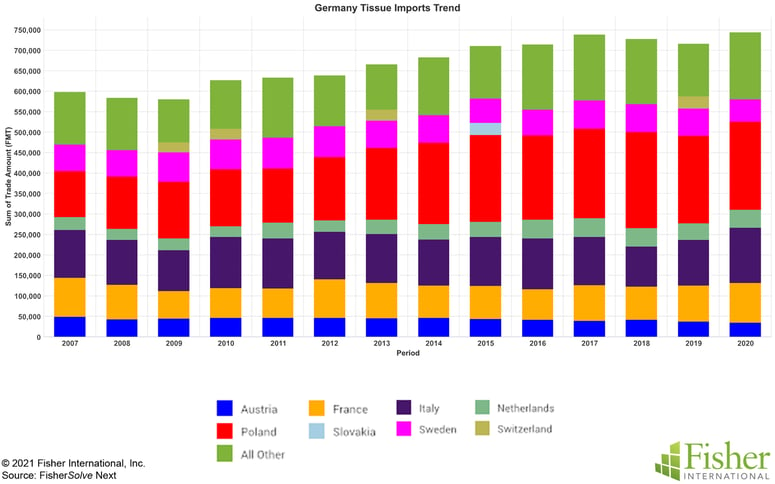 Germany’s tissue exports are shown in Figure 6. Many of the same countries on the import producer list are seen here, indicating that most of this trade goes two ways. The top eight countries also include Belgium, Spain, and the United Kingdom. 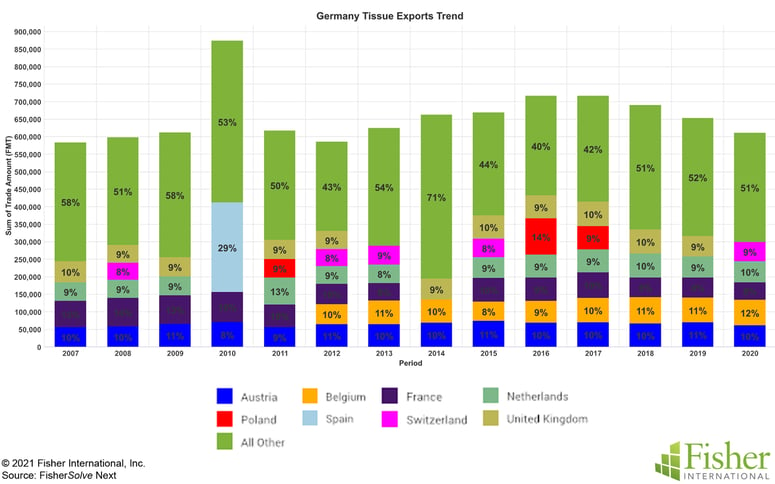 Germany’s tissue fiber sources include about 33% recovered fiber as integrated paper recovery or pulp substitutes. Over a quarter of the furnish is imported eucalyptus, complimenting the 40% northern pulps. 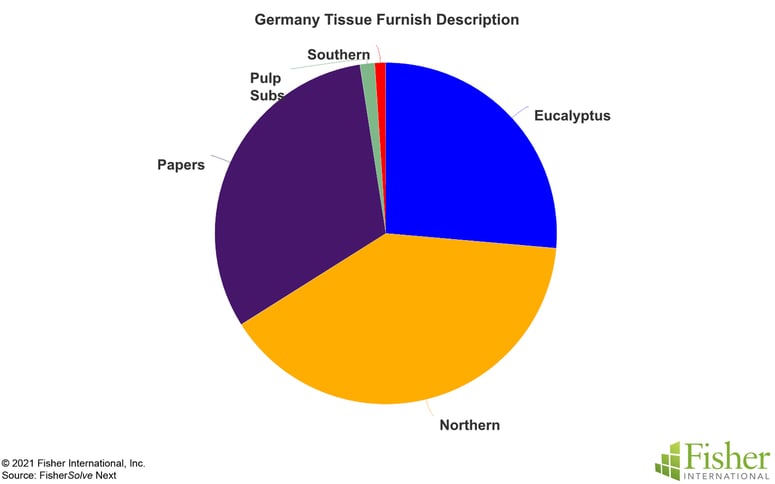 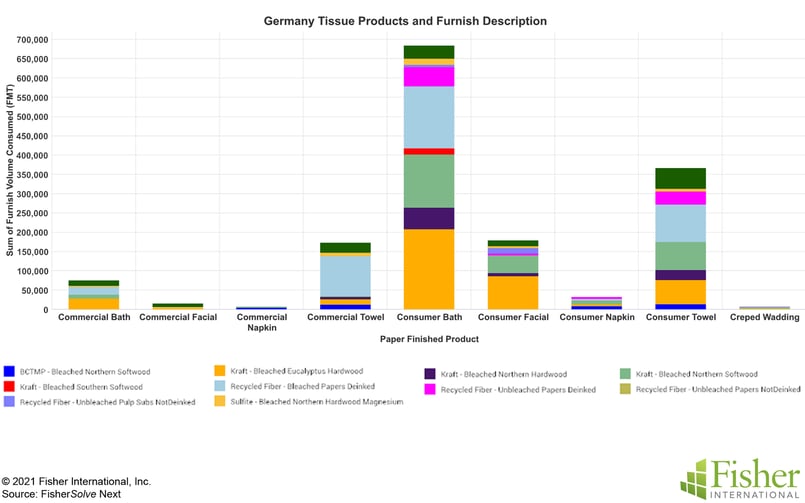 The top tissue trade partners identified in the import/export analysis provide a comparison point tissue machine quality and efficiency analysis. Figure 9 shows the relative position of Germany’s tissue machines in terms of average technical age and machine speed. The size of the bubble indicates the relative production capacity of each country’s tissue machine fleet. Germany is in a good position with the fastest machines and third-best technical age after Spain and Poland. Note that these numbers are averages and there are machines in each country that are significantly better and worse than the averages shown. Germany, Spain, Poland, Belgium, and the United Kingdom operate some advanced technology tissue machines. This subset is somewhat newer than the conventional machines and consists of TAD and more recent textured or structured processes. German consumers are known for their focus on tissue strength and ply count with three and 4-ply products every day on store shelves. 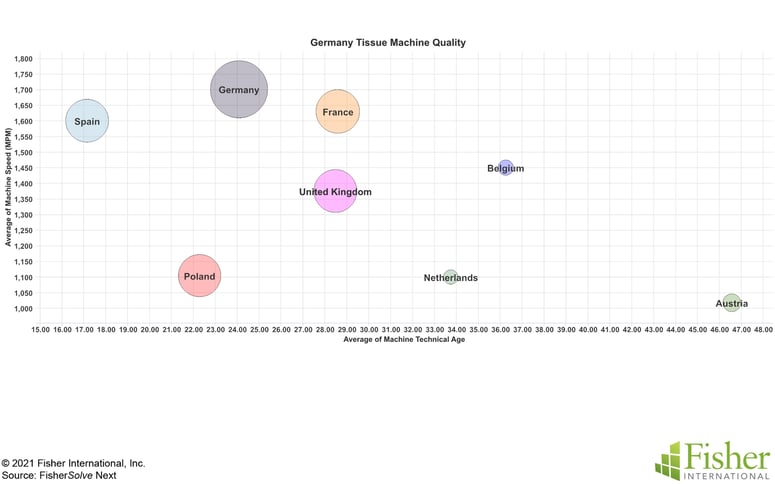 Figure 10 rates the same sets of tissue machines on average water use and site water risk. The water risks shown are small compared to other regions, but Austria stands out as very low risk and Belgium relatively high for this set. Germany’s average water use per tonne of tissue production is the lowest, which is a good position for reporting lower environmental impact. Austria’s high average water use is similar to North America, where freshwater is abundant in local mill areas. 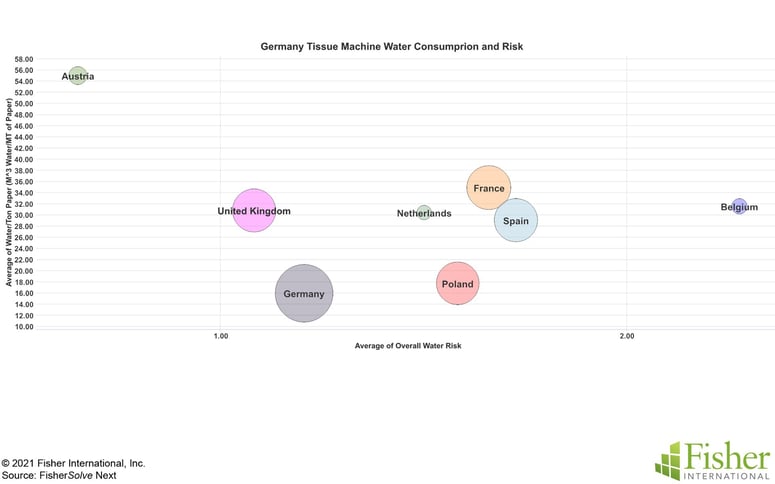 The average total cost to manufacture a tonne of tissue in each of the countries is shown in Figure 11. This includes the variable costs of raw fiber material, pulps, chemicals, energy, labor, overhead, and any credits. Germany is in the lower half of the production cost per tonne, behind Austria, Netherlands, and Poland. However, this is a relatively flat cost curve compared to other everyday situations. Germany has relatively high labor costs, like the Netherlands and France. Energy costs in the United Kingdom are the highest of the group. There are no raw materials fiber costs in Belgium, indicating that there are no integrated tissue mills using recovered paper or wood pulp. 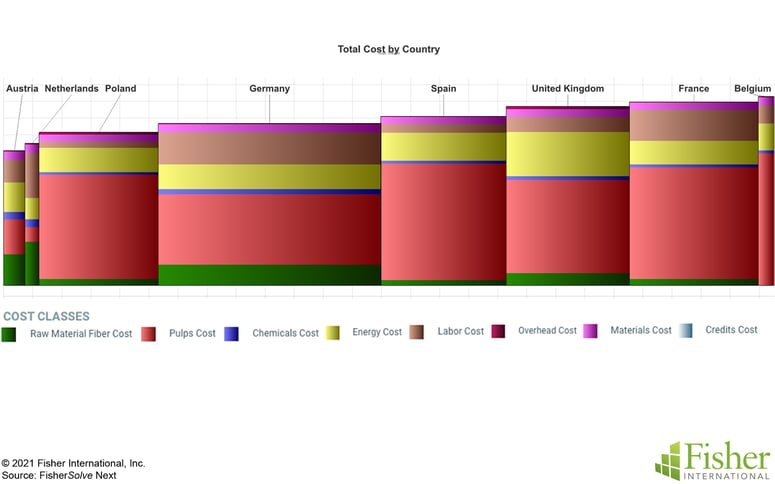 The European Union is considering carbon taxes on production and imports based on carbon dioxide emissions. Figure 12 shows the average carbon emissions per ton of tissue for each country. Germany sits near the middle of the group, but the differences are much wider than the cost curve in Figure 11. Poland sticks out as very high due to the high carbon content of purchased electricity from coal. This may become an issue for Poland’s exports to regions with a carbon tax regime. 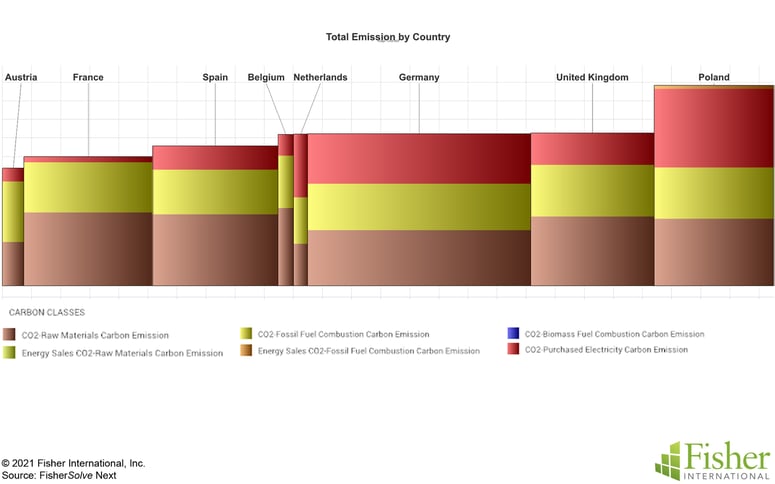 Conversely, France continues to show purchased electricity carbon due to nuclear energy. Carbon emissions produced on site appear to be relatively consistent across the set.

Germany’s tissue business continues in a slow-growth stage with replacements focused on cost and quality improvements. Nevertheless, the country is an active tissue trader with its neighbors and is currently positioned at the average of the trade group for environmental concerns in terms of water consumption and carbon emissions.

Analysis of competitive position requires specifics on tissue producers and individual machines. This article presents a static summary of Germany’s tissue industry today. Fiber prices, exchange rates, and environmental regulations will change, providing some participants with advantages and others with new challenges. The country’s tissue mills will continue to change hands and consolidate, and neighboring countries may invest in tissue-making capacity, affecting Germany’s imports and exports.

Tissue & Towel
Overview of Current Tissue Markets and the Forces that Will Shape the Next 5 Years
We recently discussed 10 interesting facts surrounding the current global tissue market. Today, however, we’re going to...
END_OF_DOCUMENT_TOKEN_TO_BE_REPLACED

Tissue & Towel
10 Interesting Facts About the Current Global Tissue Market
To say that global geopolitical, trade flows and economic structures are stressed would be an understatement. Over the...
END_OF_DOCUMENT_TOKEN_TO_BE_REPLACED 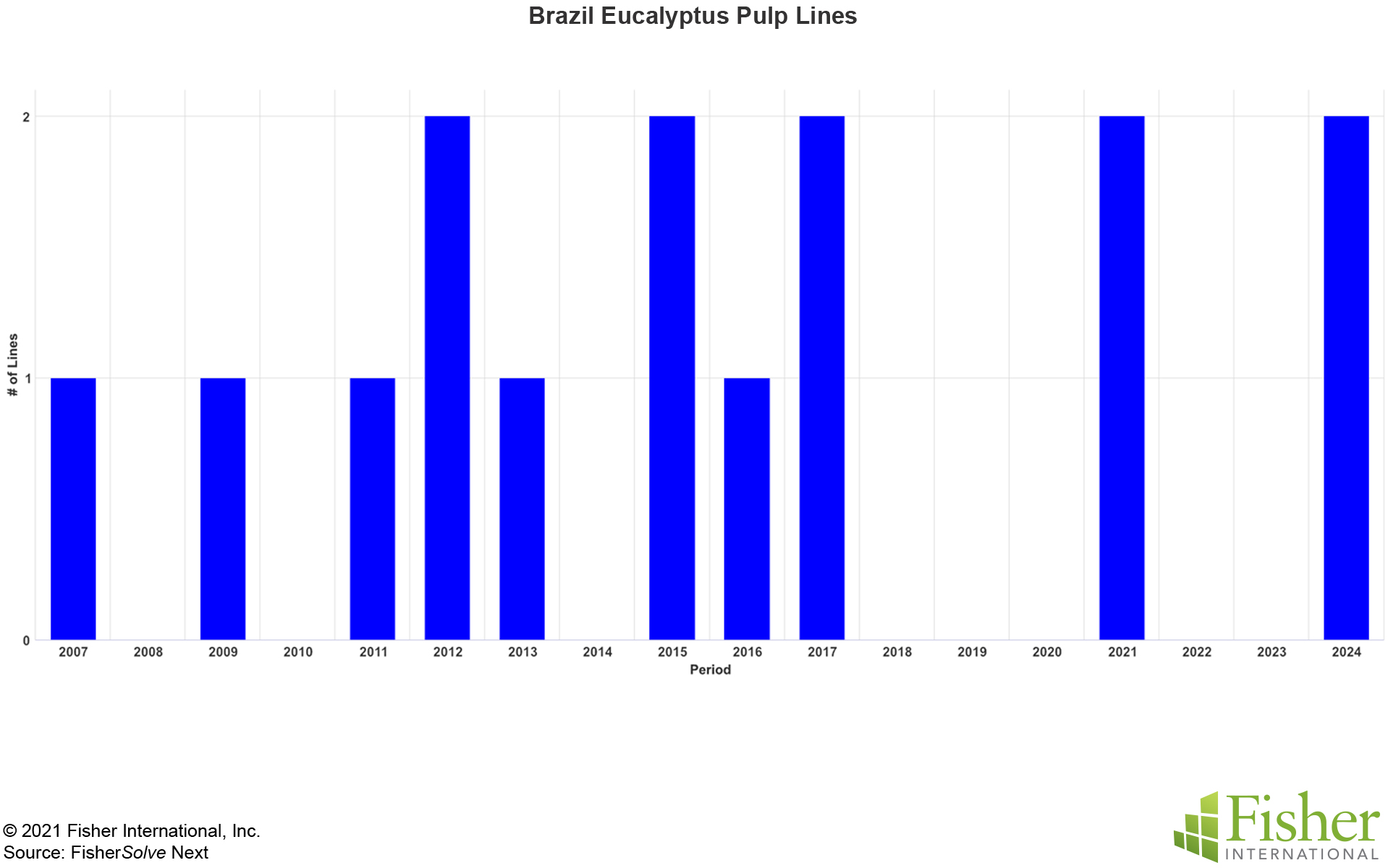 Pulp and Paper
Brazil Moves from Tissue Importer to Tissue Exporter
Those within the tissue industry know Brazil for its robust eucalyptus pulp production, which is generally used within...
END_OF_DOCUMENT_TOKEN_TO_BE_REPLACED