The International Renewable Energy Agency (IRENA) recently announced that the global renewables industry created more than 500,000 new jobs in 2017, a 5.3 percent increase over 2016. The total number of people employed in renewables (including large hydropower) now surpasses 10 million for the first time.

Per IRENA’s Renewable Energy and Jobs Annual Review 2018—the fifth edition in the series—jobs in bioenergy, which includes liquid biofuels, solid biomass and biogas, reached 3.06 million jobs in 2017, up from 2.74 million in 2016.

China, Brazil, the United States, India, Germany and Japan remain the world’s largest renewable energy employers, representing more than 70 percent of related jobs. While a growing number of countries continue to incorporate renewable technologies into their energy mixtures, a bulk of the manufacturing still takes place in relatively few nations. Four-fifths of all renewable energy jobs in 2017 were in Asia. 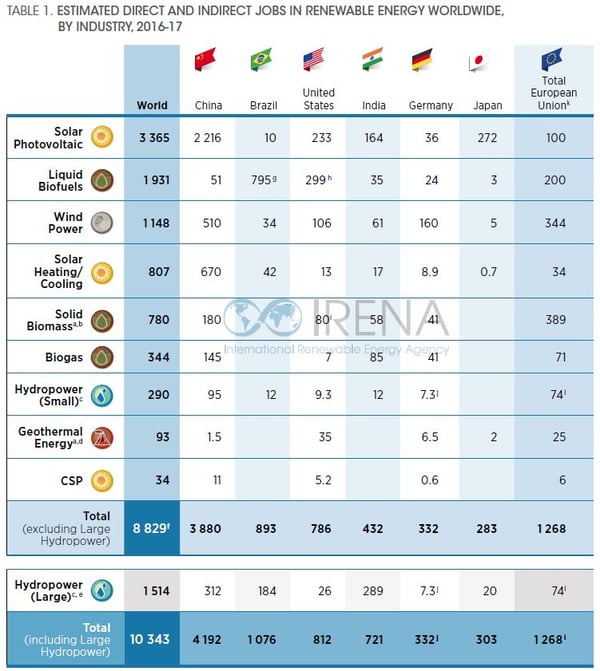 Other highlights of the report include:

Bioenergy
Biomass Power: Championing Renewable Resources
As we wrote just a few months ago, the ground is beginning to decisively shift regarding the topic of climate...
END_OF_DOCUMENT_TOKEN_TO_BE_REPLACED

Bioenergy
Forest Service Announces Investments in Wood Energy and Innovation
The Guardian recently published a piece supporting the likelihood that the COVID-19 pandemic will have a drastic...
END_OF_DOCUMENT_TOKEN_TO_BE_REPLACED