After surpassing the one million mark in March, housing starts fell by 16.5% in April. The drastic decline left starts at 853,000, the lowest number recorded since last November. Despite the lower numbers, housing starts remain well above the 711,000 mark of just one year ago.

A volatile multifamily sector was the primary contributor to the drop. Following a 27% increase in March, multi-family starts fell by 37.8% in April. In contrast, single-family home starts fell by a mere 2.1%. Like overall starts, those numbers remain well-above their year-earlier levels.

According to some analysts, the drop in single-family starts is more of a reflection of the high costs of labor and building materials and a lack of development-ready lots than a lack of buyer demand. The availability of skilled laborers is of particular concern to builders; qualified workers who left the industry after the housing bubble burst have simply not returned. Between April 2012 and 2013, industry employment grew by a modest 4.1 percent.[1]

Builder confidence increased three points to 44 from April to May. Although nearly double from that of a year ago, the mark remains below the 50-point threshold indicative of good conditions. The jump in permit activity, a reliable indicator of future home starts, was a large component of the increase in builder confidence.

Building permit activity increased from 890,000 in March to over one million in April. Permits for single-family construction reached their highest levels since May 2008. Overall, permits rose to levels not seen since June 2008. 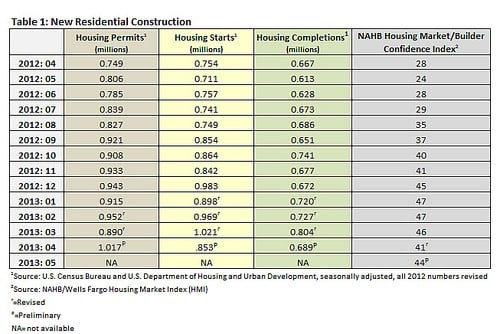 David M. Blitzer, Chairman of the S&P Dow Jones Indices Index Committee, commented on the numbers: “The National Index and the 10- and 20-City Composites posted their highest annual returns since 2006. Other housing market data reported in recent weeks confirm these strong trends: housing starts and permits, sales of new home and existing homes continue to trend higher. At the same time, the larger than usual share of multi-family housing, a large number of homes still in some stage of foreclosure and buying-to-rent by investors suggest that the housing recovery is not complete.”

Price gains are expected to continue throughout the year if housing starts continue to decline or remain low and inventory remains tight. Chief Economist at the National Association of Realtors, Lawrence Yun predicts, “Because of inventory shortages, higher home sales will push up home values to the highest level in five years.”

These trends have led to talk of yet another potential housing bubble, but economists are not concerned. Capital Economics economist Ed Stansfield has noted current home prices remain low in relation to prices of the past and current incomes and rents. Michael Gapen, senior United States economist at Barclays Capital, adds, ''We usually think of bubbles as being driven by extremely easy credit, with people borrowing more than the outstanding value of the house and making little to no down payment. That's not the case with credit standards today."[2]

In the meantime, sales of both new and existing homes remain strong. New home sales rose 29 percent from their April 2012 levels, and sales of existing homes increased by nearly 10 percent. Inventories, which typically rise in accordance with the seasonal sales cycle, remained steady. Listings for existing homes have been impacted by sellers holding out for higher prices and converting homes to rental properties. The number of homes on the market has also declined as banks work through foreclosures at a reduced pace. 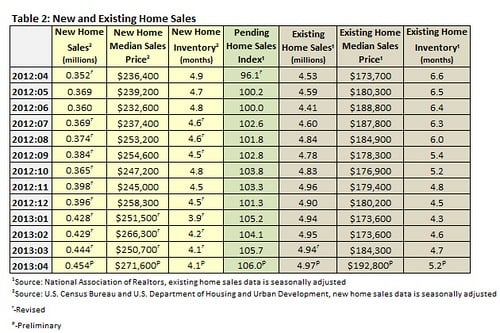 As the economy grows stronger, mortgage rates rose to their highest rates since May 2012, averaging 3.90% by the week ending May 24. Due in part to the rise in mortgage rates, applications fell throughout the month. Nevertheless, with mortgage rates that remain near historic lows, buyers are expected to continue to enter the market as the seasonal sales cycle heats up. 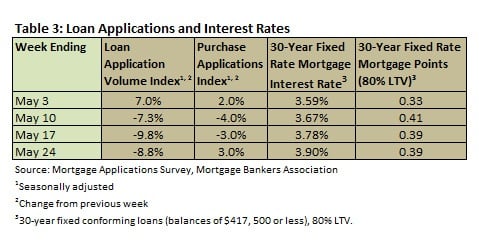 Housing Market
April Housing Starts Plunge 30%; Is the Bottom Within Sight?
After tumbling over 18 percent in March, US housing starts plummeted another 30 percent in April to the lowest level...
END_OF_DOCUMENT_TOKEN_TO_BE_REPLACED

Supply chain
Australia: Demand for New Housing & Lumber Collapses
In March 2020, before the COVID-19 pandemic gripped the global economy, there were 15,386 new dwellings approved in...
END_OF_DOCUMENT_TOKEN_TO_BE_REPLACED

Housing Market
March Housing Starts Freefall in Wake of Pandemic
Not surprisingly, US homebuilding dropped sharply in March as the COVID-19 pandemic continues to wreak havoc on...
END_OF_DOCUMENT_TOKEN_TO_BE_REPLACED