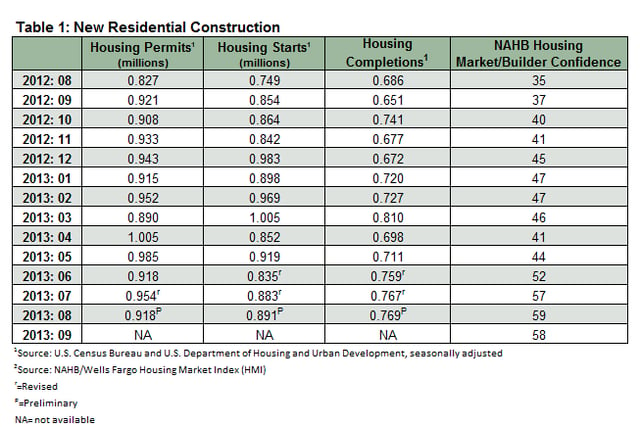 Housing starts rose less than one percentage point to a seasonally adjusted annual rate of 891,000 units in August. Single-family starts accounted for 628,000 units; multi-family starts accounted for the remaining 252,200. Compared to the 749,000 starts of one year ago, nationwide housing starts are up 19 percent. Still, starts remain a far cry from the 1.5 million annually that experts consider healthy. 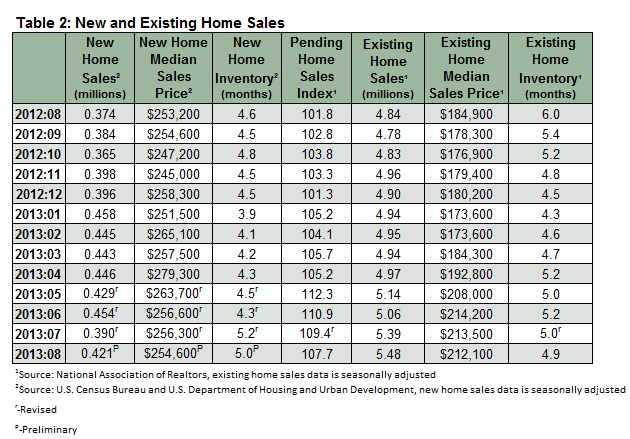 New single-family home sales improved from 390,000 to 421,000, though they remain below numbers seen throughout most of the first half of the year. Economists consider annual new home sales of 700,000 indicative of a healthy market.

Following a strong three months of over 5 million in sales, the market for existing home sales reached its highest point yet this year at 5.48 million. Analysts attributed the jump in home sales to buyers who want to lock in low mortgage interest rates that have been on the rise throughout much of the summer.

New and existing home inventory remained tight at 5.0 and 4.9 months, respectively. Both figures remain below the six-month supply considered balanced between supply and demand.

David M. Blitzer, Chairman of the S&P Dow Jones Indices Index Committee, noted that despite the month-to-month increases, the rates of the gains have declined. “More cities are experiencing slow gains each month than the previous month, suggesting that the rate of increase may have peaked.”

New home prices have fallen each month since the record-setting rises in home prices seen in April. The median price of a new home was $254,600 in August as reported by to the Census Bureau.

Data from the National Association of Realtors also indicated the median price of an existing home fell for the second consecutive month to $212,100. Prices of existing homes had risen steadily since March before reaching their highest levels yet this year in June.

The recent rise in home prices has given way to talk of another bubble, yet according to experts like Robert J. Shiller, this is not yet the case.[1] In the 16 months that ended in July, the 10-city composite of the S&P/Case Shiller Home Price Index showed home prices were up 18.4 percent. Prior to the housing bubble and 2008 financial crisis that followed, home prices increased by 22.7 percent in the 16 months that ended in July 2004.

Cause for concern? Not quite yet. In the short-term, consumers expect home prices will continue to increase. Long-term expectations, however, are fairly reasonable. In addition, buyers purchasing homes as rental properties are on the rise. Demand for rental housing is not likely to sustain high prices.

Mortgage rates experienced a slight but steady decline throughout September. The 4.49% rate for a 30-year fixed mortgage reported during the last full week of September is the lowest rate since June.

While rates above 4% do look high compared to the record-low 3.31% seen in November 2012 and the 3% range of rates available throughout most of May, current interest rates remain low compared to levels seen in the past.

Accordingly, most analysts do not anticipate increases will have a negative impact on the housing recovery. As Shiller noted in his aforementioned piece, interest rates considered low near the height of the2004 housing bubble were just over 6 percent for a 30-year mortgage.

It remains to be seen if potential buyers, discouraged by limited supply and rising interest rates over the summer, will return to the market as the buying season slows over the fall and winter months.

Supply chain
Australia: Demand for New Housing & Lumber Collapses
In March 2020, before the COVID-19 pandemic gripped the global economy, there were 15,386 new dwellings approved in...
END_OF_DOCUMENT_TOKEN_TO_BE_REPLACED

Housing Market
March Housing Starts Freefall in Wake of Pandemic
Not surprisingly, US homebuilding dropped sharply in March as the COVID-19 pandemic continues to wreak havoc on...
END_OF_DOCUMENT_TOKEN_TO_BE_REPLACED