The housing market continued along a path of cautious recovery throughout February with investments in both homes and the construction industry adding to the nation’s economic growth and recovery.

The S&P Case-Shiller home price index shows that homes are once again an appreciating asset. Home prices in each of the 20 cities measured for the index rose 8.1 percent through the end of January. The 10-city composite index showed gains of 7.3 percent. Despite the improvement, home prices across the nation remain at least 29 percent below their peak reached during the summer of 2006.

An increase in both housing permits and housing starts pointed to growth, though housing completions recorded a slight decline. Builder confidence declined, down two points since February.  Rising material costs and lack of available credit throughout the market were primary contributors to the lack of builder confidence. 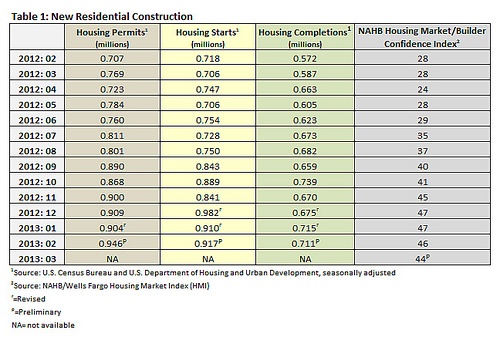 The number of new homes sold in February was below January’s sales rate; however, the number remained above 400,000 for the second month in a row. Due to the slower sales rate, new home inventory increased to 4.4 months. 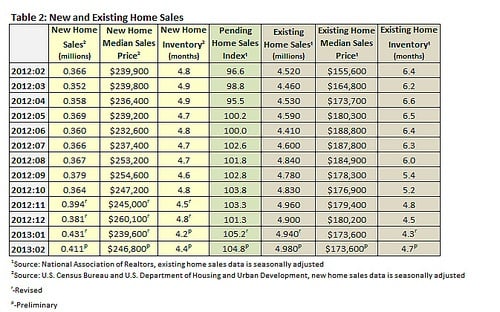 The inventory of existing housing rose 9.6 percent to 1.94 million homes, representing an increase from a 4.3 to 4.7 month supply, overall low inventory (19 percent below February 2012) was attributed to a decline in pending home sales. Still, an increasing number of homeowners are putting their homes on the market in the belief the housing market will continue to grow stronger.

Mortgage loan activity improved considerably at the start of March but leveled off in subsequent weeks. Interest rates continue to hover slightly above their historic lows, with rates ranging between 3.70 percent and 3.82 percent in March.

Housing Market
US Housing Starts Reach13-year High in December
Talk about a well-timed (if late) Christmas gift for the US economy. Housing starts skyrocketed to a 13-year high in...
END_OF_DOCUMENT_TOKEN_TO_BE_REPLACED

Housing Market
November Housing Starts Jump for Second Month in a Row
The housing market is (slowly) gaining momentum, which is largely being driven by robust economic data in...
END_OF_DOCUMENT_TOKEN_TO_BE_REPLACED